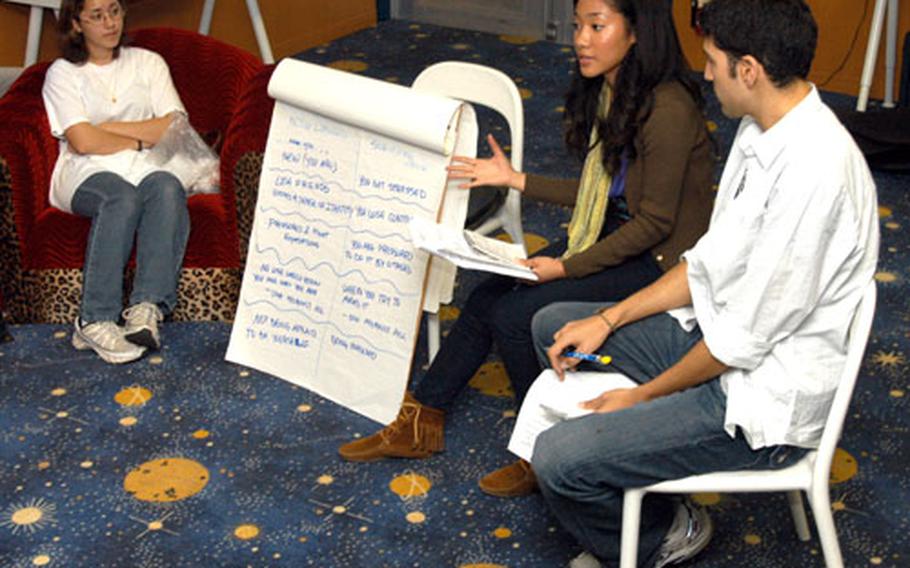 Monique Rose, center, and Andrew Jajja, right, talk with high school students at the Yokosuka Astrolounge teen center on Thursday as part of their Voice, Identify and Produce program. Love, 20, was raised at Yokosuka Naval Base until she left for college at New York University. (Erik Slavin / S&S)

They are issues that high school students throughout the United States deal with. And then there are the circumstances of living in what is in many ways small-town America surrounded by Japan.

Monique Rose, 20, understands it as few others do.

She was raised at Yokosuka Naval Base from birth through high school.

"I watched a lot of people come and go," Rose said. "Lots of them had a hard time settling in here."

Some turned quickly to substance abuse, she said.

"I used to think: Once I get into the real world, what can I bring back to this community?" Rose said.

The three-day program was designed to help high school students work through problems, learn more about themselves and share their thoughts with the community.

"We want to help teens find their identity, to realize that they&#8217;re not just a generic teen brand," Rose said. "They are capable of making responsible choices."

"It&#8217;s really hard for people here not to get in your business," one student said.

Others noted that they always see the same people and felt they didn&#8217;t have enough variety in their lives.

When they tried, the students came up with a list of things to do that few parents would think twice about before OK&#8217;ing them.

But several acknowledged that they know others who drink alcohol or who have "Robotripped" &#8212; abusing Robitussin or other medicines that when taken in large quantities can make people very sick, but also have euphoric effects.

The students talked about what they would like to see around them to make life a little more interesting.

Some ideas, like an all-ages music venue, conceivably could be created. Other suggestions, such as transplanting an American mall, are less likely.

Many students talked about how they felt free to express themselves, though only to a point.

They discussed strategies for coping with those feelings, and some agreed that while they might not be able to change how others judge them, they control how they let those judgments affect them.

Others feared they wouldn&#8217;t be prepared for the "real world" in the United States following high school overseas.

"The support system here is so strong that they didn&#8217;t feel ready to take on the outside world," Rose said while reflecting on some of the comments.

But when Rose left the base&#8217;s small-town atmosphere to move to Manhattan two years ago, she found not only that she was ready but that she could thrive.

People were interested in her upbringing in Japan, her biracial background and her opinions to an extent she never experienced before, Rose said.

Rose received a $1,000 grant for her project through the Be a Changemaker Challenge, which was sponsored by the university&#8217;s Reynolds Foundation for Social Entrepreneurship and Youth Venture.

Rose and Jajja are planning a longer summer program at Yokosuka. For information, go to www.vipventure.ning.com.