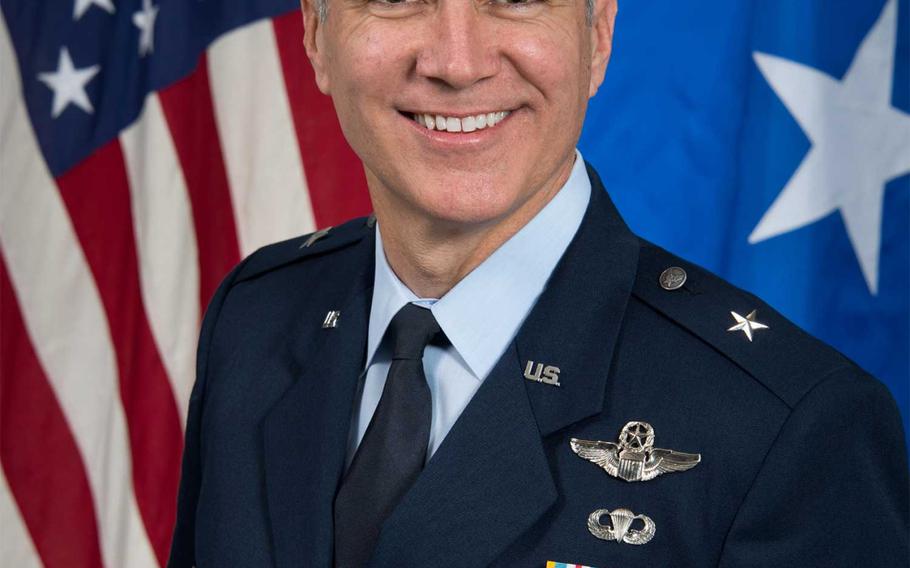 Air Force Brig. Gen. Jeremy Sloane has been selected to become the next commander of the 36th Wing at Andersen Air Force Base, Guam. (U.S. Air Force)

CAMP FOSTER, Okinawa — A former operations officer and F-16 instructor pilot for the Air Force’s air demonstration team, the Thunderbirds, has been selected as the next commander of the 36th Wing at Andersen Air Force Base, Guam.

The Air Force chief of staff announced the decision Thursday, according to a Defense Department statement.

Brig. Gen. Jeremy Sloane comes to Guam from his post as commandant of the Air War College, Air University, Air Education and Training Command at Maxwell Air Force Base, Ala. No date for the change of command was immediately available.

The 36th Wing is composed of five groups and 17 squadrons and represents the Indo-Pacific Command’s continuous bomber presence in the region, according to a Joint Region Marianas website. Andersen is home to more than 7,900 military and civilian personnel and is the most forward sovereign U.S. Air Force base in the region. Guam is a U.S. territory.

Sloane graduated from the Air Force Academy in 1992 with a bachelor’s degree in engineering, his Air Force biography said. He has held a variety of F-16 flying assignments, including operations officer and F-16 instructor pilot for the Air Force’s air demonstration team, the Thunderbirds, from 2004 to 2007.

Sloane has more than 2,500 flight hours in the F-16 and other training aircraft and 235 combat hours in Iraq and the Balkans, the biography said.

The 36th Wing’s present leader, Brig. Gen. Gentry Boswell, took command in June 2018. He is a B-1 weapon systems officer with more than 4,700 hours in B-1B, RC-135 and E-6B aircraft and 500 combat hours in Southwest Asia, the Balkans and the Horn of Africa, according to his official biography.

A spokesman for the 36th Wing said Wednesday he could not yet release details on Boswell’s next assignment.