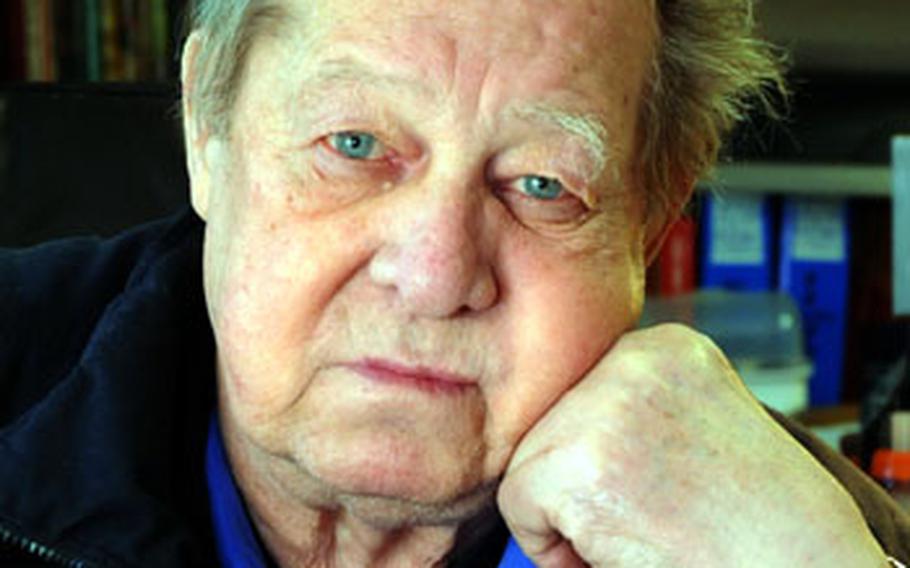 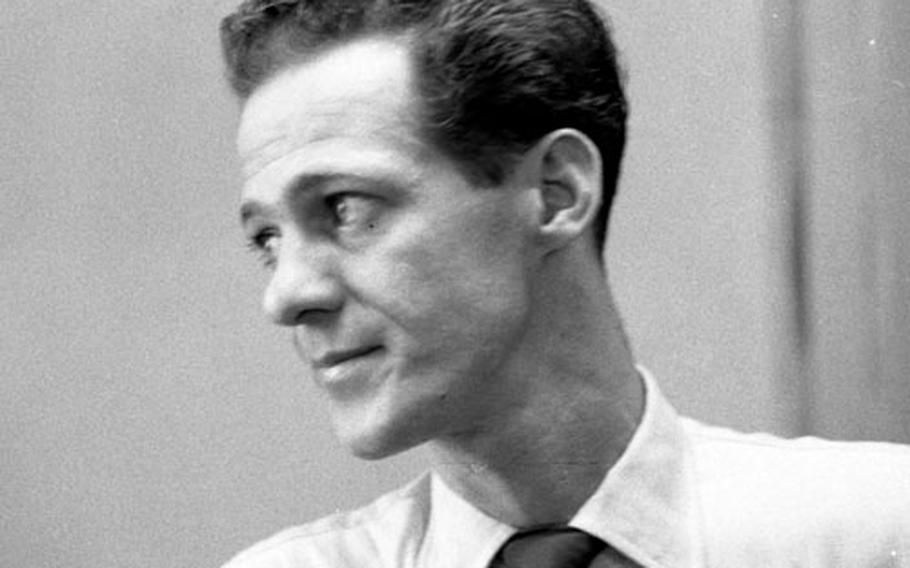 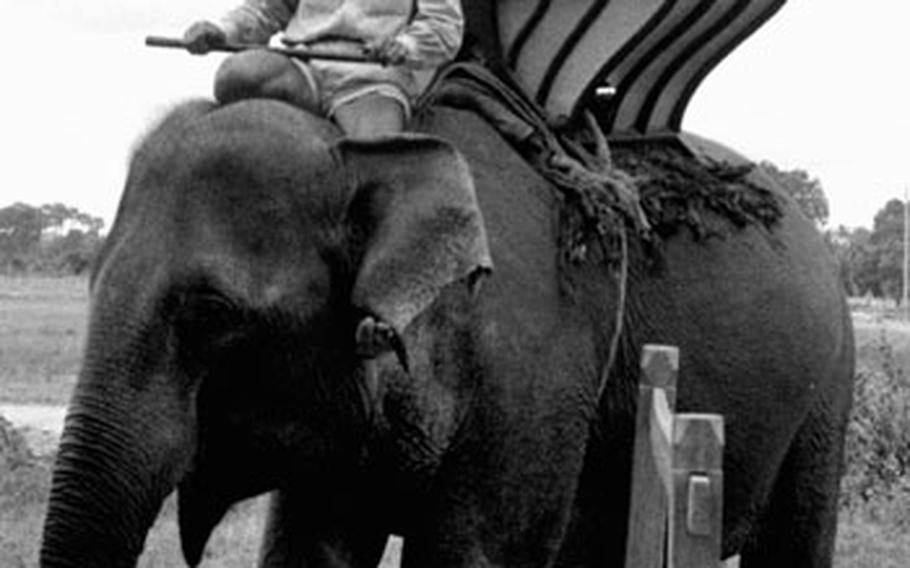 Pacific Stars and Stripes chief photographer Sandy Colton rides the local transportation while on assignment in Cambodia in the 1950s. () 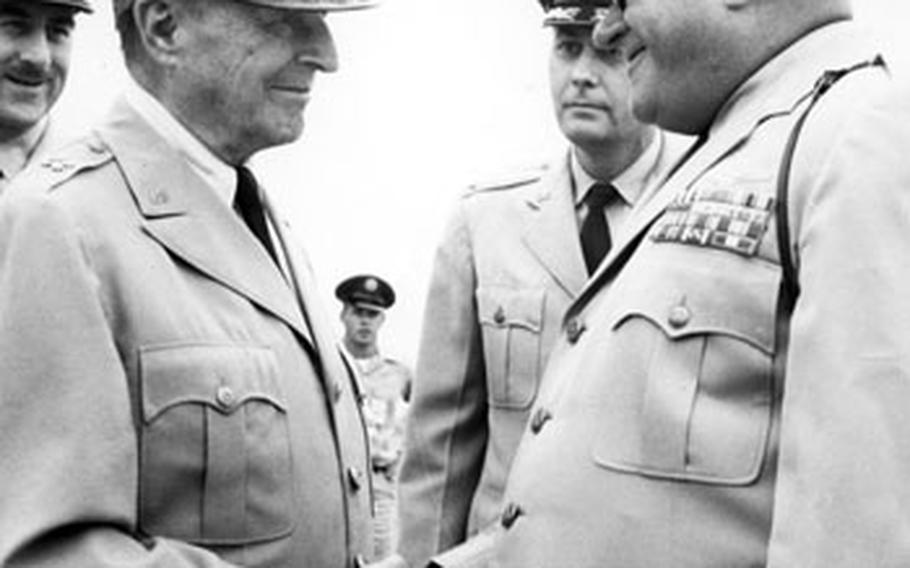 Among the famous people photographed by Sandy Colton during his time at Stripes was Gen. Douglas MacArthur, here being greeted at Yokota Air Base, Japan, in 1961. (Sandy Colton / ©Stripes) 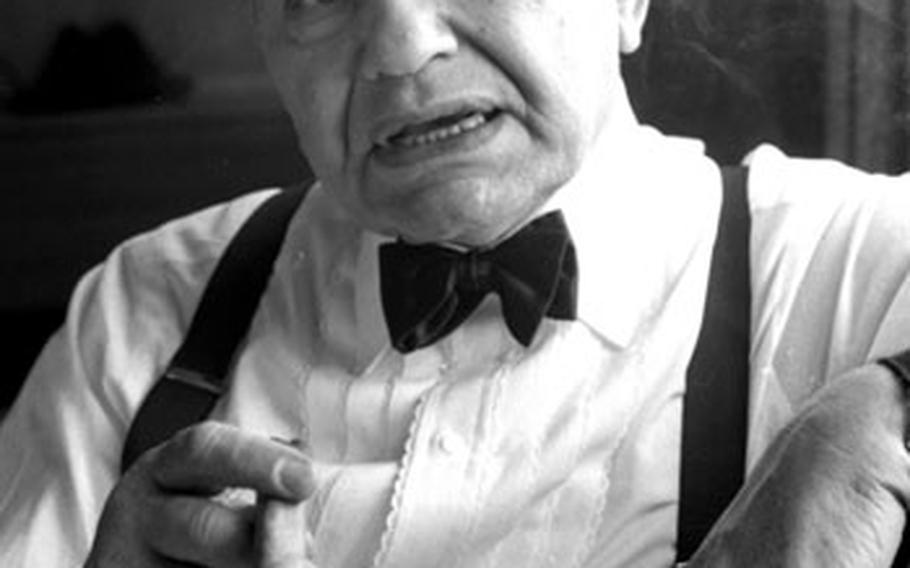 He was born in Johnstown, N.Y., October 5, 1925, son of the late Charles Sands, Sr., and Mary Adamovich Sands. He was later adopted by the late Dr. Sidney J. Colton of Johnstown.

Colton had a distinguished career as a writer, photographer, editor and historian. While an enlisted man in the Air Force, he wrote the initial history of what was later to become the Air Force Research and Development Command, for which he was later offered but declined a commission as an Air Force historian. At that time he was in Korea as a feature writer for Stars and Stripes, "having too much fun covering the war" to accept. He later became Stripes&#39; chief photographer, and traveled extensively throughout the Pacific, Asia and the Middle East as a writer-photographer before returning to the U.S. in 1961.

He served as picture editor of the Washington, D.C,, Star newspaper during the Kennedy and Johnson years, and went on to hold various editing positions with the Associated Press in New York, where he served as picture editor for a number of books published by the AP, designed a color slide service for television that is still in use today, supervised the transition from black-and-white to color photography for AP photographers, designed and equipped new universal color darkrooms for AP photo bureaus in the U.S., participated in various photographic research and development projects, and kept AP photographers equipped with the latest photographic equipment and films.

Colton supervised and photographed a number of major stories, including the early space shuttle launches. He also photographed, produced and presented multi-screen slide shows about new technologies used by the AP, as well as informational shows about various parts of the country for AP Publishers and Managing Editor&#8217;s meetings. He retired in 1984 as AP&#8217;s director of photography and photography columnist for AP Newsfeatures.

Colton was the recipient of numerous prestigious awards, including the J. Winton Lemon Award from the National Press Photographers Association for "outstanding technical achievements and years of service to the profession," as well as awards from the New York Press Photographers Association, the Society of Motion Picture and Television Engineers, Kodak and Ilford, among others .

Colton was a Life member of the National Press Photographer&#8217;s Association and the White House News Photographers Association, past member of the Society of Motion Picture and Television Engineers, New York Photographic Administrators, the Circle of Confusion, and honorary member of the University of Missouri&#8217;s Kappa Alpha Mu photojournalism fraternity and the Order of Kentucky Colonels. Locally, he belonged to the Bleecker Fish and Game Club and Gloversville&#8217;s American Legion, Post 137.

After retirement, Colton continued to work with young photojournalists as an active member of the Eddie Adams Workshop, an annual free workshop for one hundred young photojournalists from around the world. He was presented the first of what has become an annual award at the workshop, the Eddie Adams Award, named for the now-deceased Pulitzer Prize-winning photographer who began the workshop in 1988 with a number of friends who volunteer their time and expertise. Colton was a close friend of Adams, and served as an instructor and staff member at the workshop since its beginning.

Colton, who retired to a log cabin he and his wife built with friends in Bleecker, claimed that his greatest achievement is to be known to young professional photographers today as the "father of Jay and Jimmy Colton!"

He is survived by his loving wife, Irene, of Bleecker, and two sons by a previous marriage to Sanae Yamazaki: Jay Colton, retired associate picture editor at Time magazine, who lives with his wife Moira and son Christopher in Manhattan, and James Colton, picture editor of Sports Illustrated, who lives in North Massapequa on Long Island with his wife Catherine and sons Shane and Ken. A sister, Patricia Knight, lives in Mira Loma California. There are also numerous nieces and nephews.

Colton was predeceased by three brothers, Robert and Thomas Sands of Johnstown and Charles Sands Jr., of Glen Arm, Maryland.

In lieu of flowers, donations may be made to the Eddie Adams Workshop or the Stars and Stripes Museum and Library.