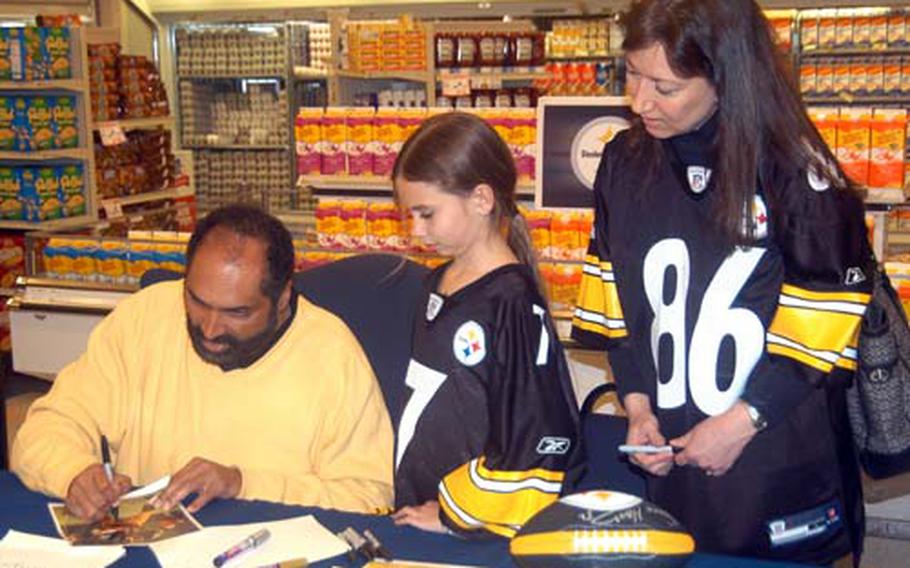 Jerrilyn Ishee, right, and her daughter, Audrey, get autographs from NFL Hall of Famer Franco Harris at the Yokosuka Naval Base, Japan, commissary Thursday. Harris is touring bases throughout the Asian theater as part of a California Sunshine tour. (David J. Carter / S&S)

YOKOSUKA NAVAL BASE, Japan &#8212; Former Pittsburgh Steelers running back and Super Bowl IX most valuable player Franco Harris met with servicemembers and their families at the Yokosuka commissary on Thursday.

More than 250 people showed up to get autographs and have their pictures taken with the NFL Hall of Famer.

"I&#8217;m amazed &#8212; my heart is beating out of my chest," said Tracy Halterman, a Navy spouse who showed up to capture some photos and autographs for her husband, who couldn&#8217;t attend.

Harris, who earned four Super Bowl rings with the Steelers, is no stranger to visiting with troops. Last year, he and a group of football greats visited bases in South Korea. Earlier this week, Harris stopped by bases on Guam and Okinawa.

"I&#8217;ve had the opportunity to meet a lot of nice people," Harris said. "And the service that they provide for our country is amazing."

When asked about Pittsburgh winning the Super Bowl this year, Harris emphasized one word: tradition.

"It was sweet," Harris said of the franchise&#8217;s sixth Super Bowl title. "Football is all about tradition, and it was great to see them continue on that tradition this year."

For some folks in attendance Thursday, the Steelers tradition is a family affair.

"It&#8217;s a rare opportunity to meet players," said Petty Officer 1st Class Warren Womer, who made the drive down with his sons from Naval Air Facility Atsugi. "They&#8217;ll definitely be Steelers fans," he said, pointing to his sons.

Harris, who&#8217;s best known for his "Immaculate Reception" play during a 1972 AFC playoff game, will wrap up his Pacific tour Saturday in South Korea.