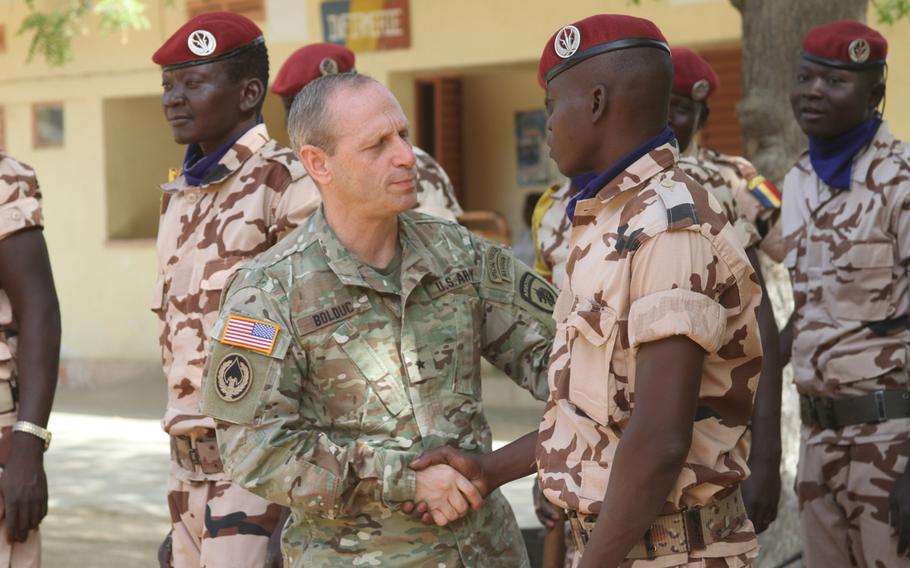 STUTTGART, Germany — U.S. forces operating in Niger have been shot at numerous times during the past two years.

They’ve hit a roadside bomb in a remote northern part of the country. And they’ve gone on reconnaissance patrols, where no enemy contact was expected but violence suddenly flared.

“We’ve had guys in firefights there before as a result of our partners getting in firefights. That happens,” said Donald Bolduc, who commanded special operations forces in Africa until June.

Outside the public eye, troops have suffered minor injuries in connection with those incidents, Bolduc said Wednesday in an interview with Stars and Stripes. One soldier died earlier this year in a vehicle rollover not far from where four U.S. soldiers were killed in an Oct. 4 ambush.

Bolduc recounted such incidents, which all occurred during his 26 months in command at Special Operations Command Africa. During that time, Niger became a major focal point for the military in Africa.

“It is dangerous. Our guys are operating in areas very similar in environment to Afghanistan, Iraq and Syria, but not with the same kinds of authorities and resources,” Bolduc said. “We’ve had several, a number of combat casualties there under my command.”

The U.S. military has a growing presence in Niger, where there are now 800 troops supporting a campaign to help local forces battle violent extremist groups. But the ambush of a 12-man U.S. special operations team, on patrol with a Nigerien contingent of 30 troops, shook the political establishment in Washington. Some lawmakers said they were largely unaware of military activities in the region, despite White House letters advising Congress of troop levels.

Much confusion still surrounds the Oct. 4 operation, which is now under military investigation. Authorities are trying to determine what went wrong and how the body of one soldier — Sgt. La David Johnson — wasn’t discovered until nearly 48 hours after fighting began.

Part of a U.S. Africa Command probe into the incident is looking at whether the forces had gone beyond the scope of what was billed as a civil-military reconnaissance mission. Several media reports, citing unnamed military sources, have said the team was directed to extend its patrol to help get information on a high-value target believed to be in the area. In doing so, they may have been entering an operational gray zone.

The U.S. and Nigerien soldiers are believed to have been set up by local villagers, who worked to distract and delay the unit’s departure while militants prepared an ambush.

The possible shift in mission focus has raised questions about whether U.S. forces violated a policy that restricts soldiers from joining missions where enemy contact is deemed likely.

Determining the likelihood of combat isn’t an exact science, said Bolduc, who said any decision on the ground to hunt down a target for kill or capture would be a clear violation of the rules of engagement.

“They don’t have the authorities in place to do that on the fly,” he said.

Any decision to arrange a capture or kill mission in Niger would require not only higher headquarters approval but also a green light from the White House, he said. However, if the decision on the patrol, which began Oct. 3, was to expand the mission to gain intelligence, U.S. forces would still be working within approved authorities if enemy contact was deemed unlikely, Bolduc said.

Such decisions often are made by the commander on patrol, a Green Beret captain leading a 12-man detachment.

“By all means he (the captain) has the authority to do that,” Bolduc said. “If he is following bread crumbs of the mission they were out there to do, to gain information, and it wasn’t something where he believed contact was likely, then we have to trust them to figure out what that point is.”

Conversations between his command team back at camp, headed by a lieutenant colonel, and the main operational camp in Niger are frequent and factor into decision-making, Bolduc said. “Sometimes there is a tactical pause. I saw that happen numerous times. There is a tremendous amount of trust for how these guys operate.”

AFRICOM declined to comment on the decision-making chain of command in Niger, citing security issues.

Bolduc, however, said it was highly unlikely that soldiers had decided on their own to launch a capture or kill mission given that it would be such an obvious violation.

Reconnaissance ground patrols were routine during his time in command, Bolduc said. And those missions are not without risk as violence in the region has picked up over the past year, he said. In the case of intelligence, surveillance and reconnaissance, “the assets are certainly not adequate," he said.

AFRICOM’s desire for more intelligence and surveillance capability — voiced in a March request to Congress for additional support — came as violence around Niger was on the rise.

Various militant groups, such as al-Qaida in the Islamic Maghreb, have long been active, but earlier this year it and other militant strands forged closer ties under the banner of the Group to Support Islam and Muslims, Bolduc said.

Though the area has gotten more violent, U.S. forces still need to conduct missions with Nigerien forces while trying to conduct careful risk assessments, he said.

Meanwhile, Washington should pay closer attention to operations in Africa, Bolduc said. The controversy over the deaths of four soldiers has been politicized, he said.

“I am sorry that all the sudden that everybody just turns on to the fact that this is a volatile, uncertain, complex area. I am sorry you guys (Congress) just woke up to this in Washington, D.C.”