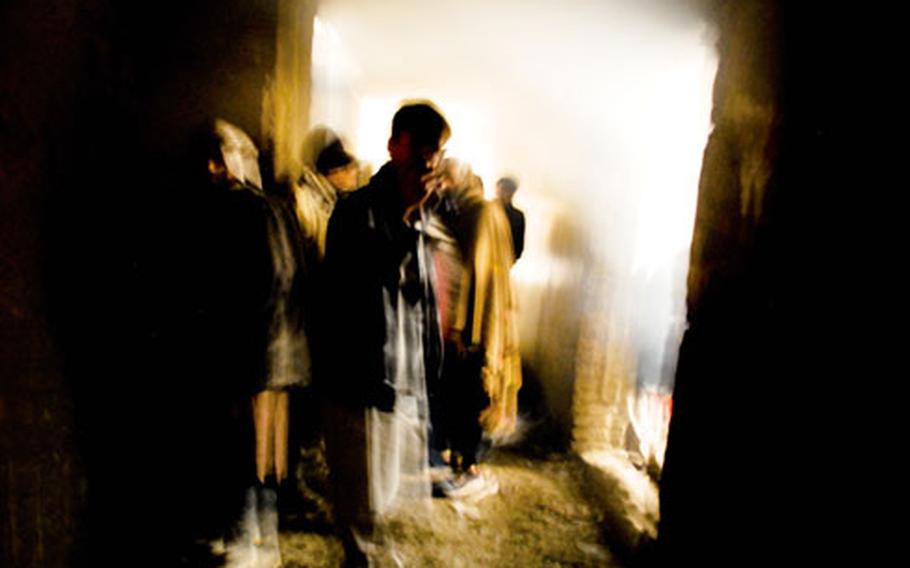 Mohammed Sherren, a Kabul police detective, leads the way toward the “shooting galleries” where heroin addicts cook and smoke heroin. Sherren said there’s little the police can do with the addicts. ()

Mohammed Sherren, a Kabul police detective, leads the way toward the “shooting galleries” where heroin addicts cook and smoke heroin. Sherren said there’s little the police can do with the addicts. () 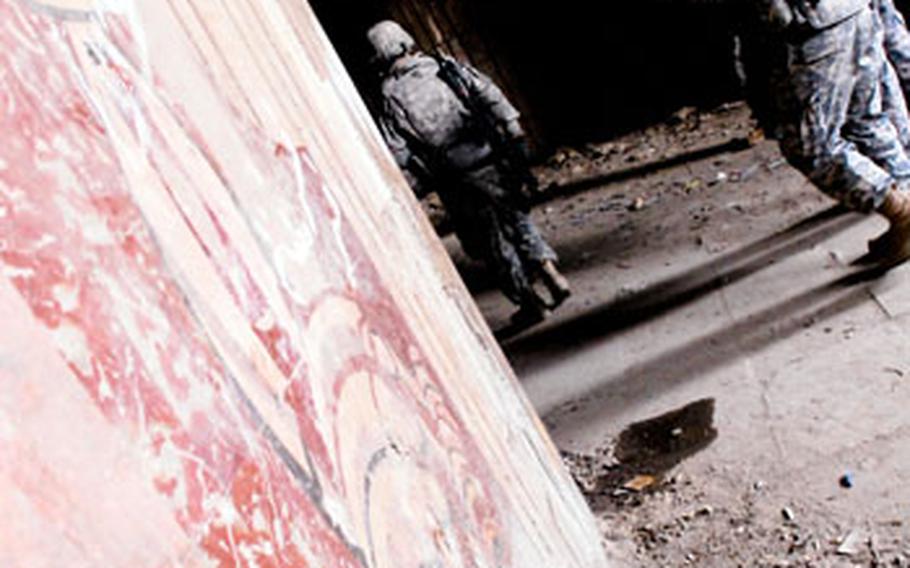 U.S. troops pass a shattered mural inside the ruins of the center. (Photos by Michael Gisick/Stars and Stripes)

It began during a meeting with a local police chief, who mentioned an abandoned building filled with drug users.

The commander of the mentoring team, Capt. Lenny Williams, assured the chief that such things existed in every city in the United States.

But what his team found inside the cultural center &mdash; mostly destroyed during Afghanistan&rsquo;s civil war in the mid-1990s &mdash; would make the average crack house look like a Radisson.

Hardly visible from the bustling streets outside, hundreds of people lived, or at any rate, got high, inside the bowels of the crumbling building. Room after room was filled with addicts smoking and cooking heroin, filling the hallways with a thick, acrid cloud. Human waste, dirty underwear and trash littered other rooms, and few of the lost men inside seemed to take much notice of the soldiers.

It is an ugly reminder that Afghanistan&rsquo;s drug problem is not merely an export issue.

"I am 15 and I am addicted to heroin," a boy who gave his name as Moktar said. "I&rsquo;m angry. I haven&rsquo;t had anything to eat."

A Kabul police detective who came with the Americans, Mohammed Sherren, said the police occasionally arrested addicts who made trouble, but largely preferred to stay away.

"They are like bees," he said. "If you arrest one, you will just see another one."

But away from the soldiers and police, the addicts said they were often harassed by the police, who stole their drugs and mobile phones and then sold back the drugs.

"It is very cold and we put plastic in the windows to stay warm, but the police come and tear down the plastic," said Anwar, 27. "There is only one hospital and they have just 30 beds for the addicts."

Afghanistan produces better than 90 percent of the world&rsquo;s opium crop, which is used to make heroin. Most is exported to Russia and western Europe, but Afghanistan also has a growing problem with drug addiction.

Most of the addicts said they had become addicted while living in Iran or Pakistan, but some said they&rsquo;d gotten hooked here. One man pulled faded photographs of mujahedeen fighters posing with their weapons during the Soviet occupation and said they showed him in his better days.

"I was a good fighter, but I lost my mother and my father and all my brothers," the man, Jafar, said. "Because of these sorrows I turned to drugs."

Outside, a group of addicts, which had grown into a small crowd, began to get edgy as they realized that no one in the visiting party was there to help them.

"Everybody comes and writes something and takes pictures, but no one helps," one said. "We are here for four years and no one helps us."

The American soldiers were getting edgy as well. Williams looked around the ruined compound and said it must have been a nice place once, with fountains and pools.

"When the Russians were here," Sherren, the police detective said, "it was really beautiful."