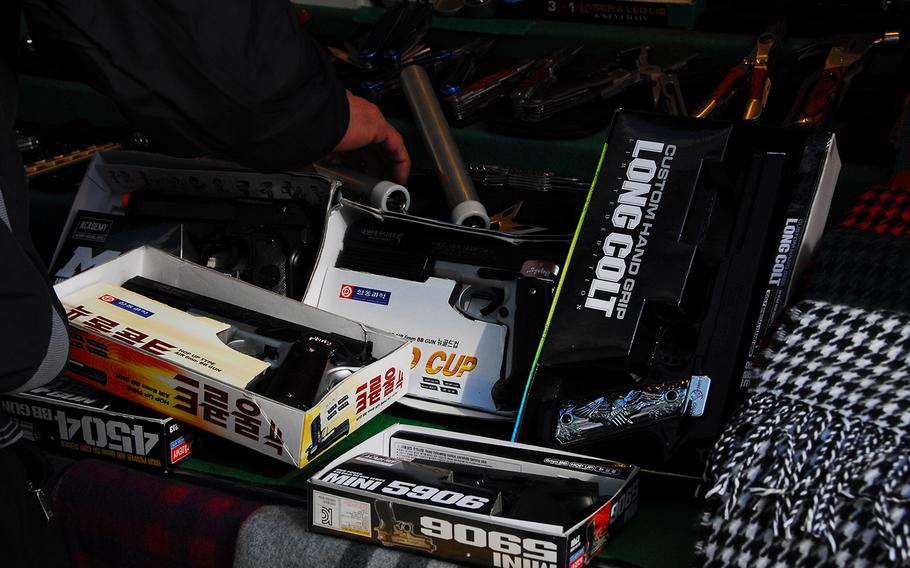 Buy Photo
A sidewalk vendor in Itaewon arranges a display of BB guns, scarves and other mock weapons, not far from the spot where three U.S. soldiers allegedly fled after at least one of them shot a BB gun at passersby in early March. (Ashley Rowland/Stars and Stripes)

The Seoul High Court on Thursday upheld a three-year sentence for a former U.S. soldier convicted of firing a BB gun at pedestrians and later hitting a South Korean police officer with a car.

Lopez-Morales and Pfc. Wendy Fuentes were convicted in Seoul Central District Court in September for firing BBs at a crosswalk in the crowded Itaewon entertainment district. They drove away, triggering a high-speed chase that led to a third soldier being shot in the chest by a South Korean policeman.

The incident sparked considerable attention in South Korea, and prompted public calls for the military to do more to prevent troop misbehavior.

Lopez-Morales — formerly Fuentes’ superior— also pleaded guilty in a general court-martial in May to military charges of dereliction of duty, adultery, four specifications of making a false official statement and three specifications of failure to obey an order or regulation, according to the Eighth Army. He was sentenced to eight months’ confinement, demoted to E-1 and given a dishonorable discharge.

Fuentes was assessed the maximum fine under South Korean law, 5 million won (about $4,600), at an earlier court proceeding. She was reduced in rank from E-4 to E-3 and fined a month’s pay at a court martial.