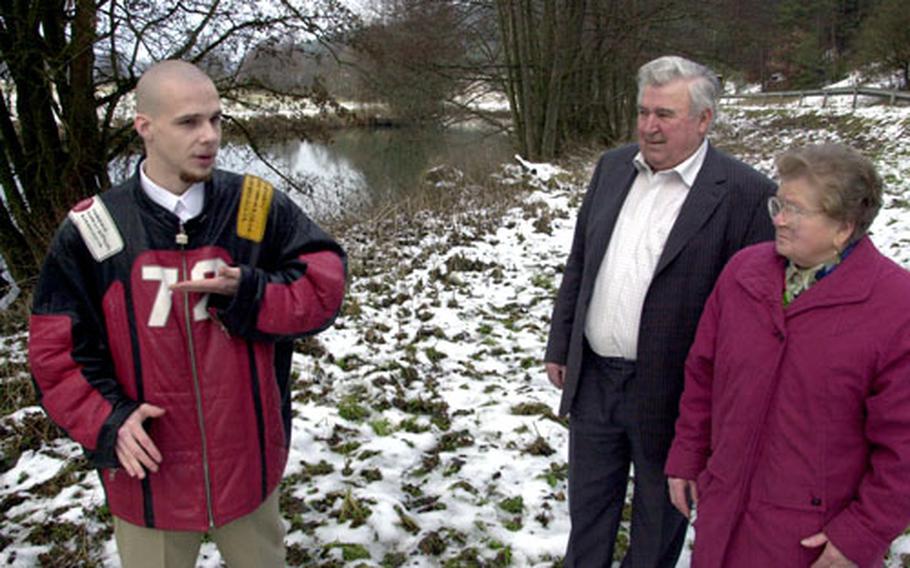 From left, Hohenfels Teen Center worker Ben Felton talks to Josef and Bernadette Heimler beside the Vils River on Friday. Felton rescued the pair after their car crashed into the river in May last year. (Seth Robson / S&S)

HOHENFELS, Germany &#8212; When Hohenfels Teen Center worker Ben Felton leaped into the Vils River to save a pair of drowning motorists last May, he did not stop to think of the danger.

There was a fast-flowing current in the 9- to 15-foot-deep river, which is icy cold year-round. But all that the 28-year-old former U.S. soldier thought of was saving the elderly Germans whose red Ford Fiesta hatchback had skidded off the road, near the U.S. Army base at Hohenfels.

Felton, a self-described &#8220;military brat&#8221; attended Hohenfels High School before joining the Army in 1999. After leaving the Army in 2001, he returned to Germany to become a mentor at the Hohenfels Teen Center, where he gives youngsters &#8220;alternative activities to playing video games.&#8221;

He returned to the scene of the accident Friday shortly after the Department of the Army gave him the Civilian Award for Humanitarian Service for his bravery. As he stood on the riverbank looking into the murky water, memories flooded back.

The accident happened on May 6, 2005, when Felton was driving his van along the road between Hohenfels and Amberg to visit his mother. He was following the Fiesta, driven by retired farmer Josef Heimler, 76, who was taking his wife, Bernadette, 72, to their home in the nearby town of Lanzenreid. The car hit a marker by the side of the road.

Felton pulled over and ran to the bank, then threw off his wallet and shoes and leaped into the 40-yard-wide river to save the couple, he recalled.

By the time Felton reached the Heimlers they were standing up to their chests in water on the roof of their car, which was completely submerged.

Felton swam Bernadette to the nearest bank where he was met by a fisherman who helped drag her out of the water.

Meanwhile more Germans arrived and rescued Josef while others brought warm blankets for the shivering couple.

Felton said his Army training helped him react to the disaster.

&#8220;I never thought I&#8217;d see anything like this but I was prepared to do first aid and cardiopulmonary resuscitation. At the Teen Center you have to be CPR- or first-aid certified,&#8221; he said.

The Heimlers also visited the accident scene on Friday and appeared extremely grateful for what Felton did for them.

The couple said they had supported the U.S. Army in their community since the arrival of Americans during World War II. Felton&#8217;s actions reinforced their feelings, they said.