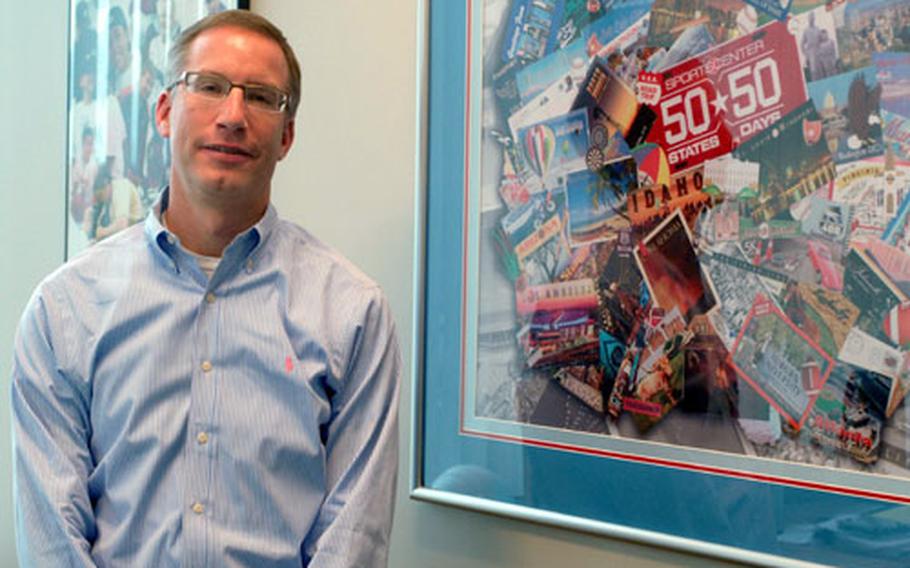 John Seibel hosts his radio show, "SportsNation." at ESPN&#39;s headquarters in Bristol, Conn. Seibel, 37, served in the Air Force for two years and the Hawaii Air National Guard for two more as a satellite communications specialist. He joined ESPN in 2000. (Dave Ornauer / S&S) 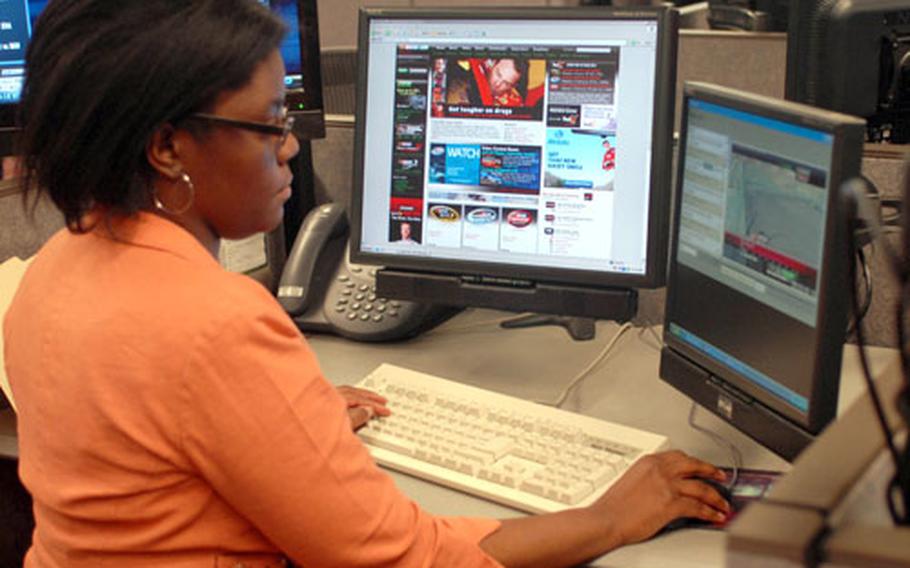 Tiffani Davis, coordinating producer of ESPN&#39;s "NASCAR Now," conducts online research at ESPN&#39;s headquarters in Bristol, Conn. Davis was an Army brat who went to 17 different schools and decided to get into media while her family was assigned to Germany in the early 1990s. (Dave Ornauer / S&S) 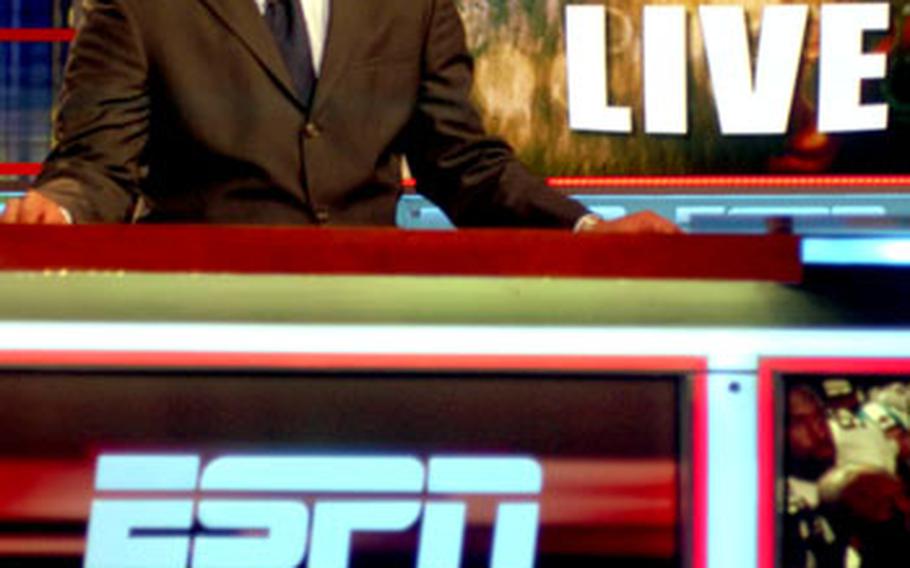 Mike Hill readies to go on the air with the "NFL Live" show. Hill, 37, is a former Air Force sergeant who was assigned as a radio communications specialist at Clark Air Base, Philippines, from June 1989 to January 1991. He&#39;s been working for ESPN since 2004. (Dave Ornauer / S&S) An aerial view of the ESPN campus in Bristol, Conn., which boasts close to 20 buildings and nests of satellite dishes. (Rich Arden / Courtesy of ESPN)

BRISTOL, Conn. &#8212; As a sergeant in Air Force radio communications 18 years ago, Mike Hill found limited television choices at Clark Air Base in the Philippines.

He could choose from just two American Forces Network signals. On either, he could view programs that aired in the States days, weeks, even years earlier.

Once in a while, there would be a baseball or hockey game from a fledgling all-sports network called ESPN.

Fast-forward to 2008 at ESPN&#8217;s sprawling headquarters on Bristol&#8217;s southern edges. Hill is now on the opposite side of the TV, an anchor for ESPN&#8217;s "NFL Live," one of many programs that ESPN provides AFN and its thousands of viewers overseas.

And as AFN has grown, from one signal in 1980 to eight today, so, too, has ESPN. The sports network has blossomed from one cable channel in 1990, to 15 signals, plus a magazine, radio and interactive online services.

Being overseas causes a "disconnect," a homesickness that such programming helps to alleviate, Hill said.

"Just to see those shows kept us connected," Hill said of the occasional ESPN program he watched during his two years at Clark. "People want to get away from the realities of day-to-day life and they turn to sports.

A couple of buildings down from Hill&#8217;s "NFL Live" studio, John Seibel is just finishing up his latest "SportsNation" show on ESPN radio.

Seibel spent 1989 to 1991 at Hickam Air Force Base on Hawaii, and later served in the Air National Guard before earning a journalism degree from Arizona State University and making his way to ESPN.

"I always struggled with whether my job here has any importance," said Seibel, 37, of Englewood, Ohio. "I find when I get e-mails from service people who know I was in the military, that gives me great relevance."

Hill, Seibel and more than 150 other former servicemembers are a small part of ESPN&#8217;s exponential growth over the years.

From a trailer operation with about 100 employees, the staff has grown by 400 percent and the property has expanded into the size of a small college campus, with nearly 20 buildings and nests of satellite dishes.

Faces such as Stuart Scott, Trey Wingo, Fred Hickman, Chris Berman, Steve Levy, Kenny Mayne and Bob Ley are as familiar as a cup of coffee. "SportsCenter" has evolved into a must-see for fans.

Along the way, ESPN and AFN have developed a special relationship.

ESPN programming such as "Pardon the Interruption," "Rome Is Burning" and "Around The Horn" dots AFN&#8217;s lineup. "Sunday Night Baseball," "Monday Night Football" and "NBA Friday" are staples, along with coverage of major events such as Wimbledon.

All that comes at no cost to the Department of Defense, and AFN officials say they are grateful for ESPN&#8217;s largesse. "They&#8217;re a key component of our service," said Larry Martolla, AFN&#8217;s TV sports programming director.

But it&#8217;s not just the everyday lineup that connects the network to AFN and its overseas audience.

ESPN has at times brought its act to where troops live, work and play. Three summers ago, ESPN&#8217;s "50 States in 50 Days" made a stop at Petersen Air Force Base, Colo., host site of the All-Armed Forces Women&#8217;s Softball Tournament.

"It seemed like the right thing to do," Gross said. "It was a big event on the base, and they were all appreciative that we came."

"The adrenaline was running at an all-time high," said Air Force Master Sgt. Danny Acosta, then an All-Air Force team assistant coach, now stationed at Osan Air Base, South Korea. "It was definitely a rush to have the cameras everywhere, the F-16 flybys, signs galore. Definitely a top-five moment in my lifetime."

"From a company standpoint, perhaps one of the best ideas and execution we&#8217;ve ever had," McQuade said of a staff of 20 and a ton of equipment flown on three planes to Kuwait and back.

To Al Black, 35, a former Navy petty officer first class who worked as a fire control technician, being a broadcast engineer at ESPN isn&#8217;t much different than the 24-hour-a-day ship environment.

"You find that military folks can adapt quicker than people who come from other jobs and companies," Black said. "We tend to reach out and bring veterans in because they tend to adapt."

The company has brought in so many former servicemembers that it formed a committee in 2004 to organize events that recognize veterans who work there.

Regardless of whether they served in the military, the vast majority at ESPN view their jobs as helping people be true to their teams, enjoy sports and forget about life for a while.

"Read the paper lately? Real life stinks," said Seibel. "If I can get them away from that, divert them from real life, I consider that a success."

The feeling is reciprocated by the likes of Acosta and countless other servicemembers overseas.

"It makes you kind of forget about what is going on around you, and you get a little touch of back home," Acosta said.