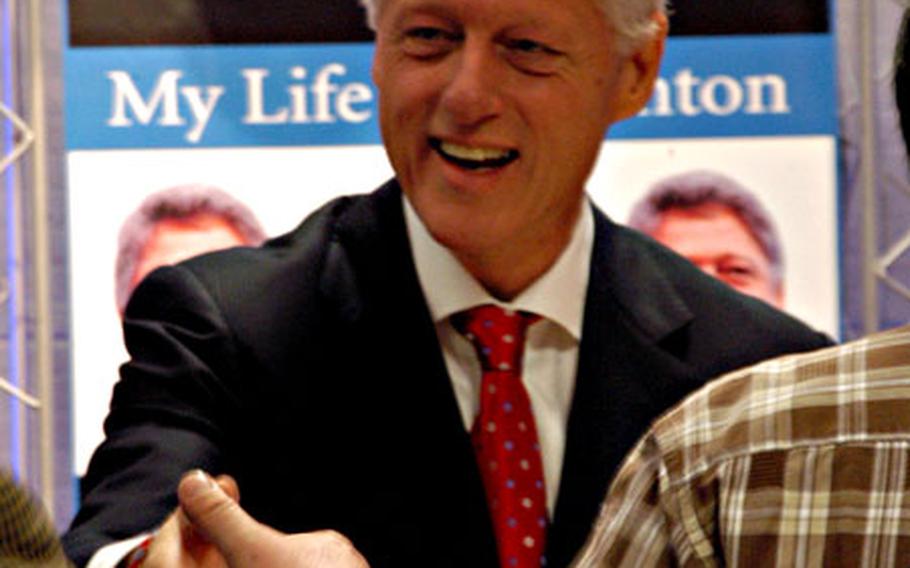 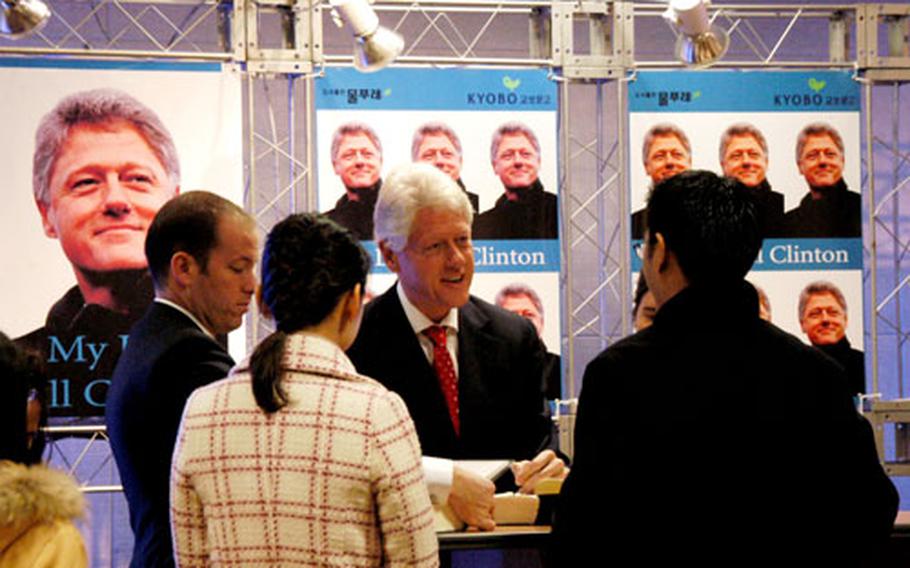 pnw# 50p sb Former President Clinton talks with a group of Koreans during Friday&#39;s book signing in Seoul. Clinton&#39;s two-day stop in Korea came on the heels of a tour he and former President George Bush made to the tsunami-ravaged parts of Asia. Clinton said he would donate some of the proceeds of his book sales to the tsunami relief efforts. (Teri Weaver / S&S)

SEOUL &#8212; Hundreds of South Koreans waited for hours Friday for the chance to shake hands with and watch former President Bill Clinton sign their copies of his autobiography &#8220;My Life.&#8221;

Some people brought two books each, the limit for the signing at the Kyobo Book Centre in the Gangnam District, south of the Han River. Some brought their kids. Some wouldn&#8217;t leave the room where Clinton stood for two hours signing autographs.

Three South Korean girls from Seoul Foreign Language High School got in line, outside, at 6:30 a.m., seven hours before the autograph session began.

&#8220;We were almost freezing to death,&#8221; said one of the girls, who along with her sophomore classmates are taking a special class aimed at getting accepted at an American university. &#8220;But our teacher came to cheer us.&#8221;

Clinton was in Seoul on Thursday and Friday to promote his book, which has sold 2 million copies worldwide. A Hangul version has sold more than 100,000 copies.

Earlier this week, Clinton and former President George H.W. Bush toured areas of South Asia hit by the Dec. 26 tsunami. Clinton has said he would donate part of the proceeds of his book sales this week to the relief efforts.

On Thursday, Clinton said he thought the recent tension about North Korea&#8217;s nuclear program would lessen with more diplomatic discussions.

Clinton was president in 1994 when the first nuclear crisis happened on the peninsula. Then, an agreement between the United States and North Korea was to freeze the communist country&#8217;s nuclear weapons development. Later, the United States discovered that agreement was violated. Earlier this month, North Korea announced it has nuclear weapons, a claim that hasn&#8217;t been independently verified.

On Friday, Dan Meadors waited in line to get an autograph for his mother. Meadors, from Clearwater, Fla., and a teacher at Hanyoung High School, said he was surprised there were almost no other western faces in the crowd.

Clinton was supposed to travel to South Korea last year to promote his book, but the trip was cancelled because of his heart problems.