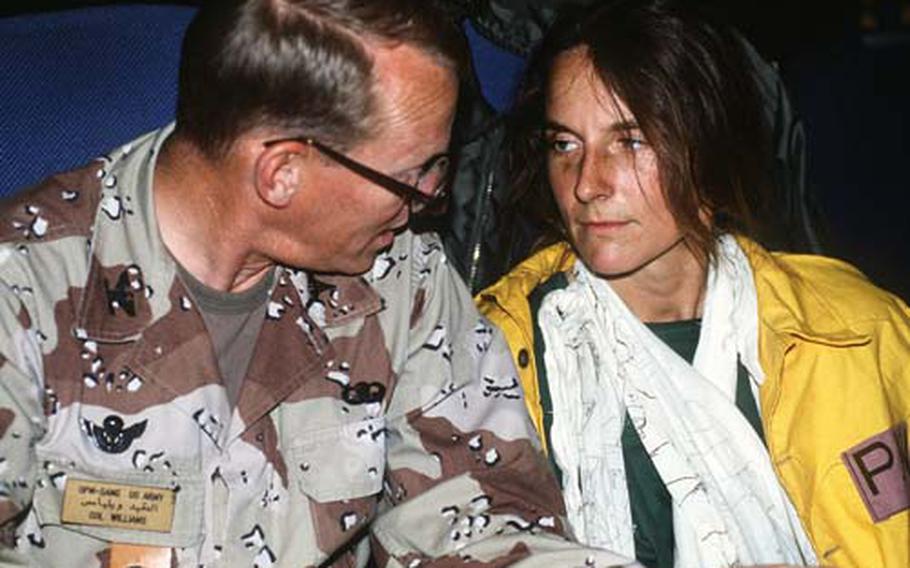 Then-Maj. Rhonda Cornum, a flight surgeon assigned to the 2nd Battalion, 229th Aviation Brigade, sits next to U.S. Army Col. Richard Williams on a C-141B Starlifter transport aircraft after her release by the Iraqi government during Operation Desert Storm in 1991. Cornum was held for eight days as a prisoner of war. (Courtesy of the U.S. Army)

Then-Maj. Rhonda Cornum, a flight surgeon assigned to the 2nd Battalion, 229th Aviation Brigade, sits next to U.S. Army Col. Richard Williams on a C-141B Starlifter transport aircraft after her release by the Iraqi government during Operation Desert Storm in 1991. Cornum was held for eight days as a prisoner of war. (Courtesy of the U.S. Army) 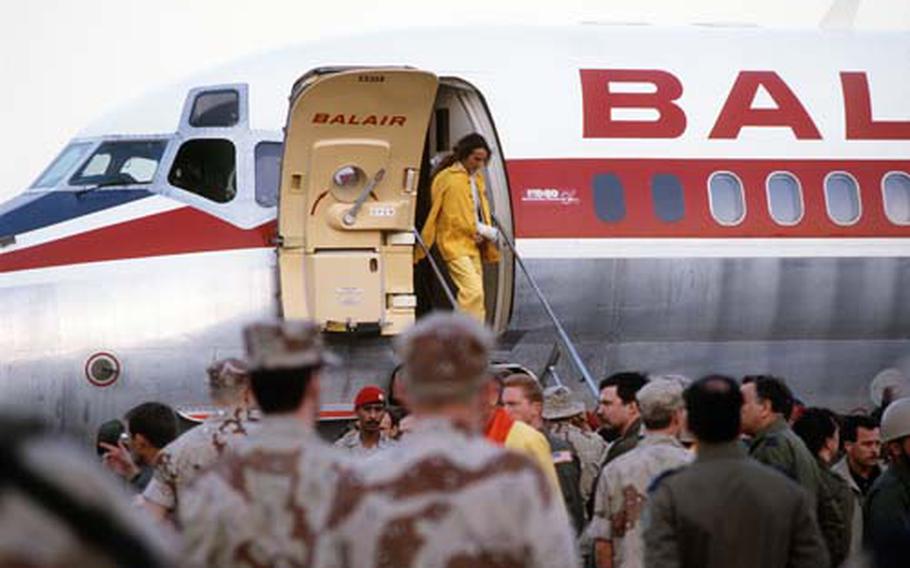 Maj. Rhonda Lee Cornum disembarks an International Red Cross DC-9 aircraft from Geneva at the Riyadh Air Base upon her release by the Iraqi government during Operation Desert Storm. (Army file photo) 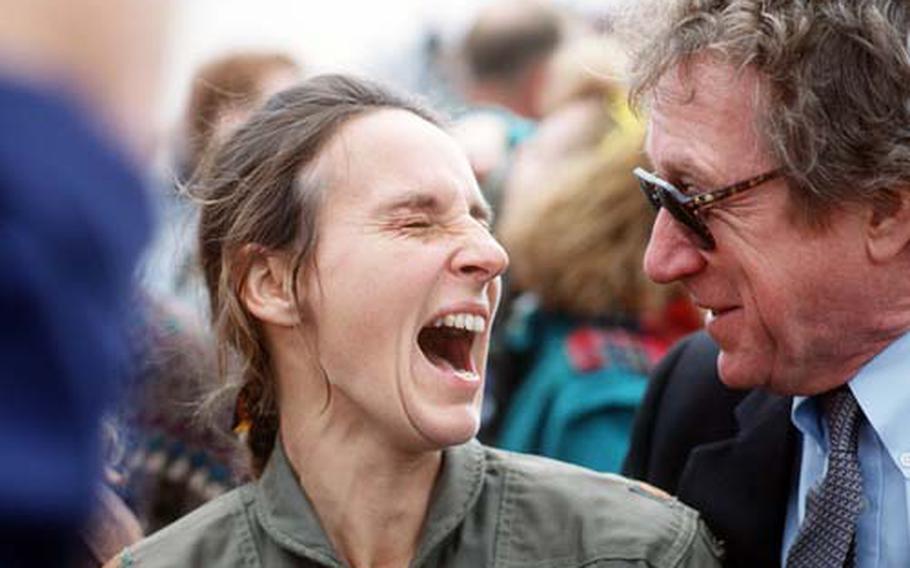 Maj. Rhonda Lee Cornum is reunited with a loved one upon her return to the United States. (Army file photo) 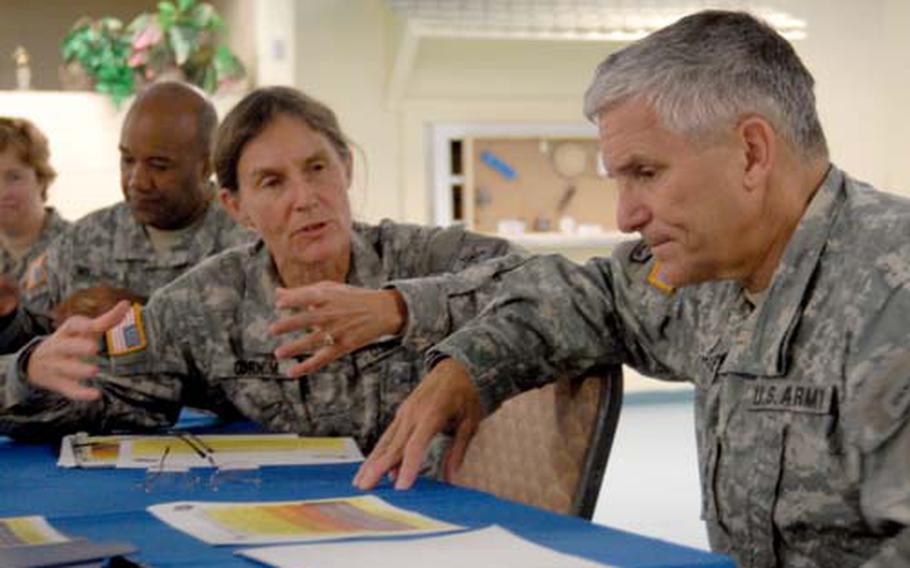 RELATED STORY:Army trains soldiers on how to be mentally, emotionally tough

She is, after all, one of the two female soldiers held as a prisoner in the Persian Gulf War. She was captured after her medevac Black Hawk came under fire and went down, slamming into the desert at 140 mph.

Five soldiers died in the crash. Cornum, then a flight surgeon, was among three survivors.

&#8220;Pinned under the wreckage, she dug her way out with two broken arms, a broken finger, a gunshot wound, torn knee ligaments, an eye glued shut with blood, and other injuries,&#8221; Time magazine reported.

Then she saw five Iraqi soldiers pointing their rifles at her.

Cornum was held for about eight days in early 1991, frequently blindfolded and moved, kept in a cell and sexually molested before her release.

Despite the ordeal, Cornum, who grew up in upstate New York and was once a finalist to become an astronaut, never experienced post-traumatic stress reactions.

No nightmares, no flashbacks, no trouble sleeping, she said.

She stayed on duty. She wrote a book. She returned to school to become a urologist, a medical specialty few women choose. And she was promoted to general officer.

Now, as director of Comprehensive Soldier Fitness, Cornum is in charge of an effort to teach soldiers how to be more emotionally resilient and so, it&#8217;s hoped, less prone to depression, post-traumatic stress and suicide. How to be, in essence, more like her.

When the helicopter was going down, Cornum said, she felt certain she was going to die. But she said she thought, &#8220;At least I&#8217;m dying doing something honorable.&#8221;

After her capture, she didn&#8217;t grow despondent.

Cornum, who holds a doctorate in biochemistry from Cornell University in addition to her medical degree, didn&#8217;t get medical attention for several days during her captivity. But she appreciated the care she finally received.

And although much was made of her sexual molestation after her release, to Cornum, it was &#8220;much ado about less.&#8221;

It happened as she was riding in the back of an Iraqi truck, shortly after her capture. An Iraqi soldier unzipped her flight suit, stuck his hand in and groped her.

Her first reaction, she said, was surprise.

Did nothing bother her?

And she was bored much of the time. But she felt pretty sure things would work out.

That was just one of the ways Cornum not only survived a terrible ordeal but also overcame it.

Cornum said she&#8217;s convinced that the new Army-wide psychological training will help other soldiers improve their outlooks and outcomes. Then again, she is, as she puts it, &#8220;an indefatigable optimist.&#8221;