Former POW speaks about his ordeal in Iraq 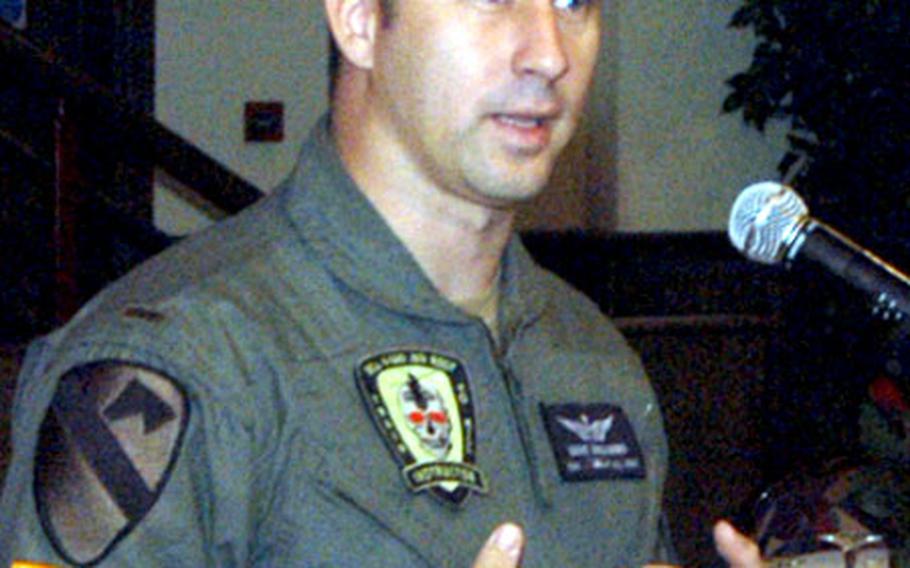 Bullets pelted his low-flying Apache on that day, March 23, 2003; one penetrated the cockpit and struck his left foot.

Ultimately, the Apache succumbed to enemy fire, forcing Williams and his co-pilot, Chief Warrant Officer Ronald Young Jr., to land behind enemy lines. The two Army pilots at first evaded their enemies but were captured less than two hours later.

For the next 23 days, they would be prisoners of war, suffering numerous beatings and facing unknown futures, as a coalition force stormed across Iraq.

Williams shared his remarkable story to a crowd of more than 100 in an annual POW/MIA remembrance luncheon at Mildenhall&#8217;s Galaxy Club on Sept. 12.

In the heat of battle

Williams, who was attached to the 1st Cavalry Division at the time, said he was part of a 31-aircraft, night mission to eliminate the Iraqi Republican Guard in a town near Karbala, about 60 miles southwest of Baghdad.

In the midst of chaos, the Apache instructor pilot said, he annihilated enemies with the helicopter&#8217;s 30 mm machine gun while dodging enemy fire, sometimes just 30 feet above ground. Eventually, extensive damage to the aircraft forced him to land.

Both pilots used irrigation canals to escape Iraqis who were closing in on the helicopter. When attempts to contact headquarters with a survival radio failed, they were spotted.

Williams and Young received a gun butt stroke to the head from their captors and were transported to a building in Karbala, where they would be beaten and then interrogated, he said.

Face to face with Marines

About 24 hours later, the pilots were taken to Baghdad, where they underwent even harsher interrogation. At one point, Williams recalled having a rifle pointed at his temple with the charging handle pulled back.

When the interrogator didn&#8217;t agree with his next response, the man holding the rifle dry-fired it against his temple, he said.

&#8220;I broke down and started crying, because the forefront of all my thoughts was to see my family again,&#8221; he recalled.

His fear grew when he felt the shockwaves of nearby U.S. bombardments on the capital city, including two 1,000-pound bomb explosions only about 75 meters away, he said.

As the battle for Baghdad heated up, the pilots and other prisoners of war from the 507th Maintenance Company were taken north to Samarra, he said.

Williams managed to escape and came face to face with U.S. Marines waiting outside. The Marines were preparing to search the building after they received a tip from an Iraqi informant, he said.

Williams&#8217; 30-minute speech earned a standing ovation from the crowd.