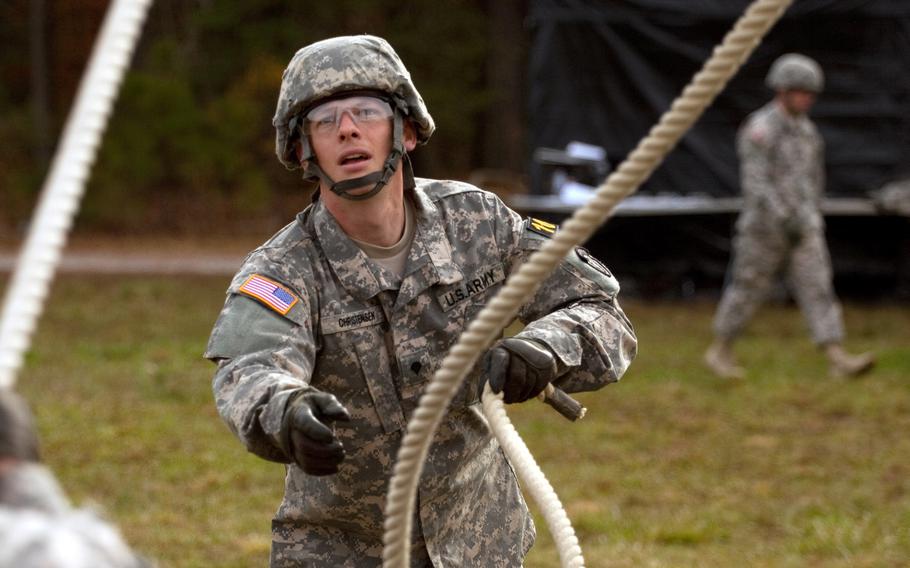 Spc. Adam Christensen participates in the leadership reaction course event as a part of the 2013 Army Best Warrior Competition at Fort Lee, Va., on Nov. 21, 2013. Christensen went on to win the award for soldier of the year at the competition. (Steven Hitchcock/U.S. Army)

Spc. Adam Christensen participates in the leadership reaction course event as a part of the 2013 Army Best Warrior Competition at Fort Lee, Va., on Nov. 21, 2013. Christensen went on to win the award for soldier of the year at the competition. (Steven Hitchcock/U.S. Army) 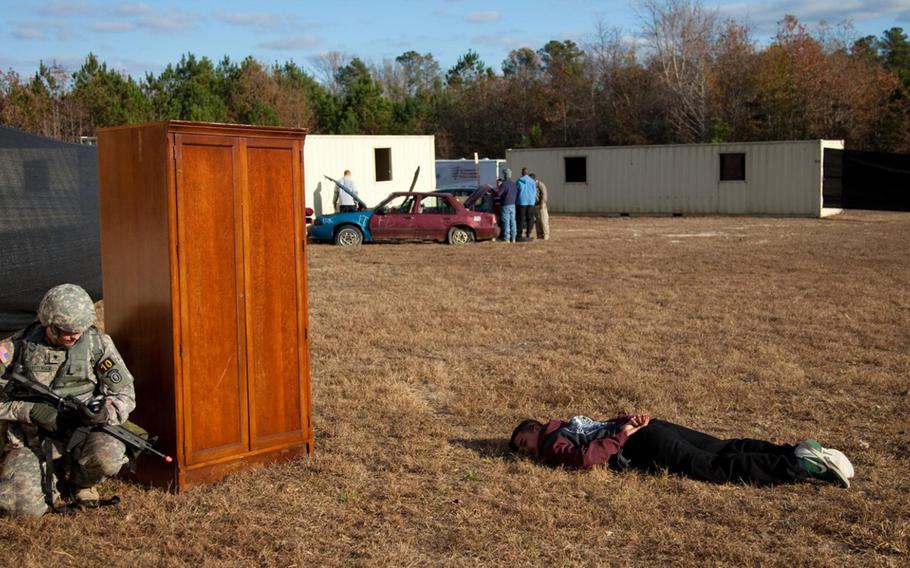 Army Spc. Adam Christensen, left, crouches during a simulation at the 2013 Best Warrior Competition at Fort Lee, Va. from Nov. 19-22, 2013. The military policeman from Fort Wainwright, Alaska's 472d Military Police Company won the soldier of the year at the competition out of a field of 12 from every major Army command. Just three years ago, Christensen was a plumber. (U.S. Army) 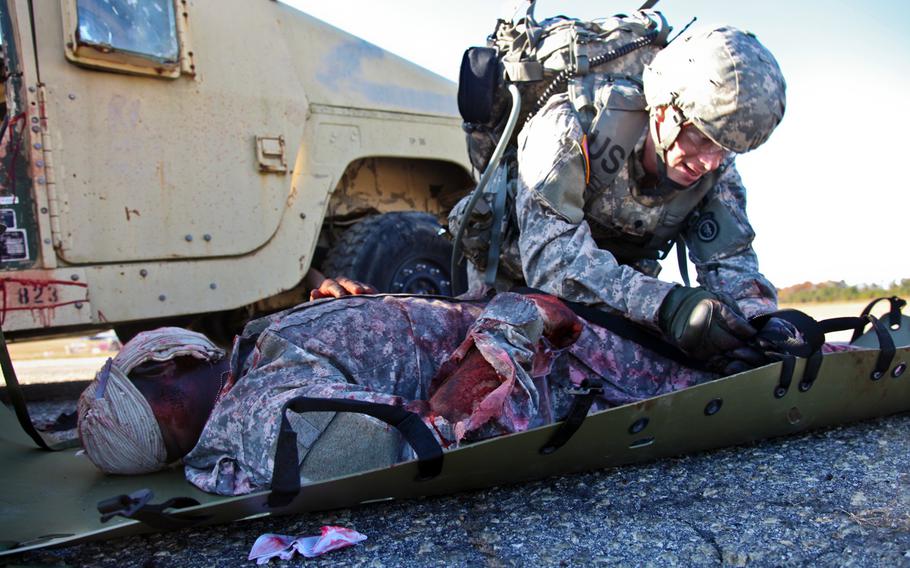 Spc. Adam T. Christensen tightens a wounded soldier down so he does not fall out during the Best Warrior Competition at Fort Lee. Virginia, on Nov 19, 2013. The straps need to be tight so the soldier does not sustain any more injuries. (Coty M. Kuhn/U.S. Army) 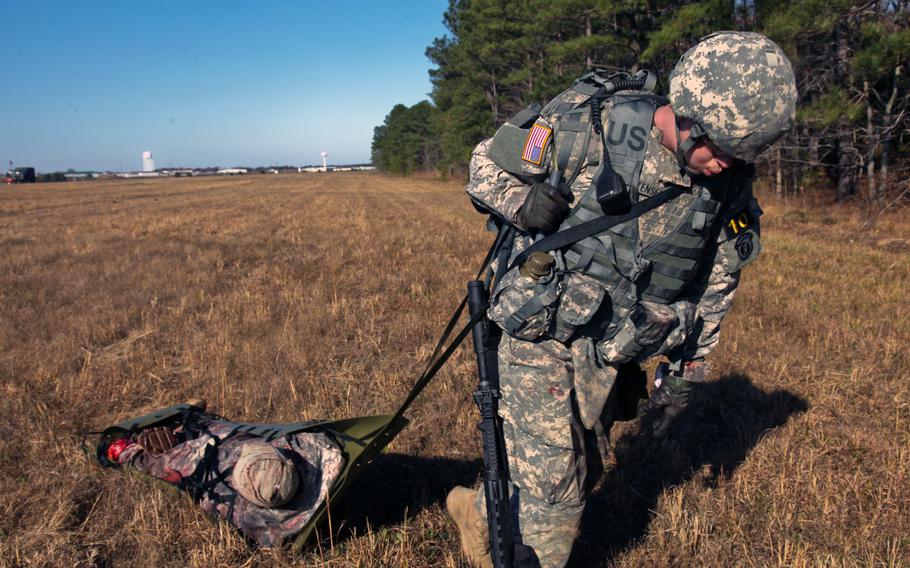 Spc. Adam T. Christensen drags a wounded soldier to the landing zone during enemy fire for the Best Warrior Competition at Fort Lee. Va., on Nov 19, 2013. This training exercise is meant to push the candidates to their limit. (Coty M. Kuhn/U.S. Army)

Self-improvement is generally measured in small victories, like losing that last couple of pounds, quitting smoking or enrolling in a college course.

Army Spc. Adam Christensen, the new soldier of the year in the Army’s Best Warrior Competition at Fort Lee, Va., has never been one for small victories.

Three years ago, Christensen spent his days under a kitchen sink, turning wrenches and unclogging drains. But he longed to be a part of something bigger; he wanted to serve his country and, most importantly, provide a better life for his family. So the plumber from Smithfield, Utah, joined the Army.

It wasn’t smooth sailing at first. He failed his first physical fitness assessment with his recruiter, which would have helped him advance prior to boot camp. But the defeat only made him work harder. By the end of boot camp, he was getting the highest marks possible.

That drive, discipline and laser-sharp focus has only picked up steam. In late November, the 29-year-old military policeman beat out the Army’s best from every major command in a series of events that tested both physical and mental prowess.

When he called to tell his wife he had won the prestigious competition as the Army’s top enlisted warrior, she was speechless and began to cry, Christensen said this week after returning to his “Arctic Titans” at Fort Wainwright, Alaska.

His commanding officers at the 472nd Military Police Company were not quite as surprised.

“I was confident he was going to do well,” 1st Lt. Stephen Stosberg said of Christensen.

Stosberg said that being a bit older and coming from the blue-collar workforce instilled in Christensen a work ethic, drive to improve and maturity not seen in every soldier. He was made team leader in his platoon as a private.

“He knows what he needs to do to be successful,” Stosberg said. “He constantly seeks self-improvement.”

An arduous regime of training and studying led to victory at the U.S. Army Alaska competition in April, then the U.S. Army Pacific crown.

“The soldiers at all of these competitions were professionals,” Christensen told Stars and Stripes. “They were the best soldiers the Army could put forward.”

To bring the Best Warrior crown to Fort Wainwright, Christensen said he focused on being proficient at a lot of things, instead of trying to be the best at everything. He wanted to be the “total soldier” who Sgt. Maj. of the Army Raymond Chandler III sought.

He went through a grueling three days, battling 11 other highly trained soldiers (there is a separate group for 12 non-commissioned officers). Christensen said he was nervous at first when looking at the strength of the competition, but that quickly dissipated as his training kicked in.

The first day, Christensen had to run, do push-ups and sit-ups and march for long distances in full gear. In between the physical challenges, as his muscles ached, his brain was put to work.

In one scenario, Christensen was asked to respond to a chemical attack, still tired from a grueling run. He was monitored closely as he put on his protective gear and assessed the situation. He had to use chemical detection paper properly and render first aid, all while simulated artillery shells exploded around him.

“It’s stressful,” he said. “There’s definitely a mental aspect as well as a physical aspect throughout the competition.”

He also had to show proficiency with the M-9 pistol, M-4 rifle and M-209 machine gun.

During the second day, he was tasked with leading a squad through physical readiness training. His leader reaction skills were tested by guiding a team and equipment through an obstacle course with limited tools.

The third day was a board of review, where he was peppered with questions as he stood in front of Chandler and other members of the Army hierarchy.

“You need to show your knowledge of what’s available,” he said.

It was stressful even for his trainer, Staff Sgt. Robert Norton.

“I was nervous watching,” he said. “He was mentally able to take on the challenge.”

Christensen returned to his unit this month and immediately dove back in to self-improvement. He wants to return to the competition next year as a non-commissioned officer and is already working toward that promotion. His goals remain lofty as ever.

“I want to take everything I’ve learned and share it with the soldiers I’ve been put in charge of,” he said. “I want to send someone else to this competition next year.”