Jamey Raines, then an Army sergeant, and his fellow soldier, Shane Rawson, then a specialist, hold a certificate and pistol they seized after capturing a former general who had served in Saddam's army in 2004. Raines says using marijuana helped him to keep his post-traumatic stress disorder under control while he attended college on the GI Bill. (Courtesy of Jamey Raines)

Jamey Raines, then an Army sergeant, and his fellow soldier, Shane Rawson, then a specialist, hold a certificate and pistol they seized after capturing a former general who had served in Saddam's army in 2004. Raines says using marijuana helped him to keep his post-traumatic stress disorder under control while he attended college on the GI Bill. (Courtesy of Jamey Raines) 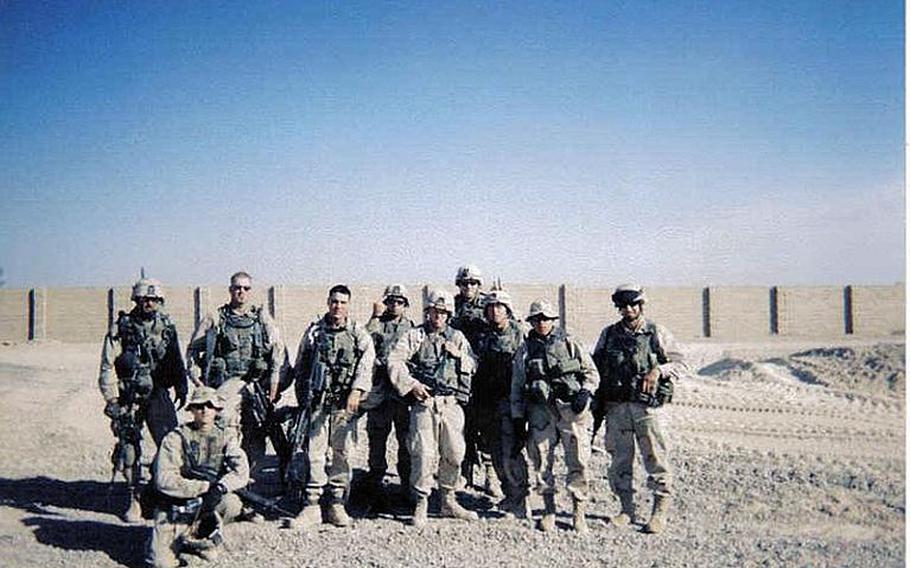 24p cs Jamey Raines, fourth from left, then an Army sergeant, poses with soldiers from his platoon during their 2003-2004 deployment to Iraq. Raines says using marijuana helped him keep his post-traumatic stress disorder under control while he attended college on the GI Bill. (Courtesy of Jamey Raines) 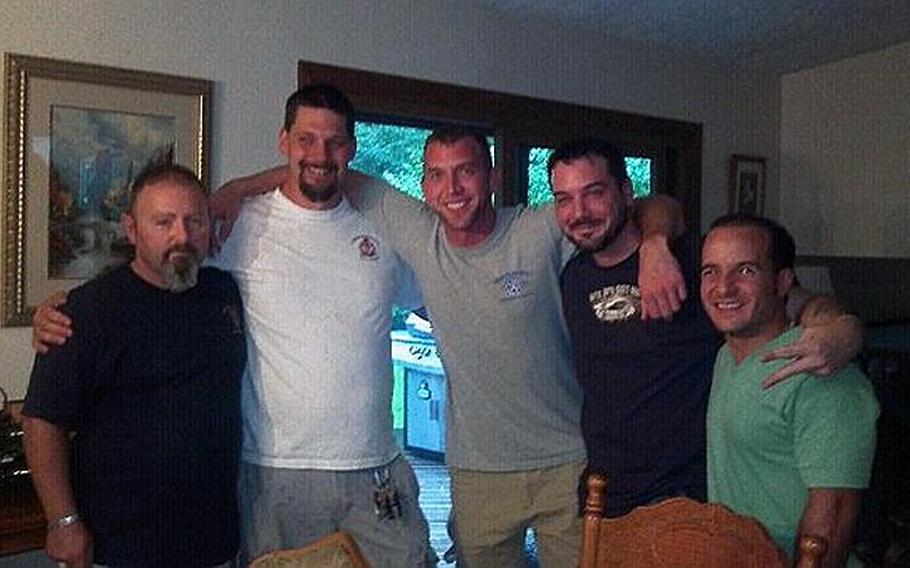 Former Army infantry platoon sergeant Jamey Raines, second from right, at a reunion earlier this month with soldiers from his platoon in Michigan. Raines says using marijuana helped him to keep his post-traumatic stress disorder under control while he attended college on the GI Bill. (Courtesy of Jamey Raines) 24p cs Sgt. Daniel M. Shepherd, center, who was killed in action in Iraq on Aug. 15, 2004, days before his unit was scheduled to return home, stands with fellow soldiers during their deployment. Seven years later, Shepherd???s death still haunts his friend and fellow soldier, Jamey Raines. (Courtesy of Jamey Raines) Former Army Sgt. Jamey Raines came home from Iraq and fought another battle with post-traumatic stress disorder, stemming largely from memories of losing friends in combat. He says he overcame the debilitating effects of PTSD with the help of marijuana. Courtesy of Jamey Raines ()

Jamey Raines tried marijuana once or twice in high school, but he said he had no interest in it after he joined the Army in 2000. He served in heavy combat in Iraq from 2003 to 2004 and rose through the ranks from private to platoon sergeant. Along the way he drank and smoked cigarettes like many infantrymen do, but he said he was &ldquo;100 percent against&rdquo; using any drug in any form.

Five years out of the military as of next month, however, Raines has changed his mind.

Using marijuana, he said, was the only way he could control his intense anger and anxiety as a result of post-traumatic stress disorder. The drug was a crutch, but a necessary one, he said, and it enabled him to go to college, earn his degree and land a decent job.

It succeeded, he said, where the fistfuls of prescription medications that Army doctors doled out failed him.

&ldquo;The only way that I got through all that was that I smoked pot every day,&rdquo; said Raines, 29, now living in Ohio. He thought of it as &ldquo;the lesser of two evils [that] made it easier to go out in public, to talk to people, and easier to let things go when people say stupid [stuff].&rdquo;

There is an ongoing debate in the medical community about the merits of marijuana as a treatment option for PTSD, and the Department of Veterans Affairs has struggled for several years with what to do with patients who use marijuana, on their own or as part of a state-sponsored medical program.

Sixteen states and the District of Columbia permit medical marijuana, but only New Mexico and Delaware allow its use to treat PTSD, and the drug remains illegal for all uses under federal law.

According to a VA fact sheet provided to Stars and Stripes, VA health care providers are prohibited from helping patients obtain marijuana or &ldquo;completing forms seeking recommendations or opinions&rdquo; on whether a veteran should participate in state marijuana programs. At the same time, patients who participate in state-sponsored programs aren&rsquo;t barred from using VA medical services.

&ldquo;This illness needs to be treated in a multidisciplinary way,&rdquo; Dr. Sue Sisley, an assistant professor of psychiatry and internal medicine at Arizona, told The New York Times in a recent article. &ldquo;Drugs like Zoloft and Paxil have proven entirely inadequate. And there&rsquo;s anecdotal evidence from vets that cannabis can provide systematic relief.&rdquo;

Sisley is part of a group of researchers hoping to get federal approval to study marijuana as a PTSD treatment.

Raines, who used the drug illegally, said he hopes his experience might counteract some of the stigma in the military about the use of marijuana as medicine. He&rsquo;s emphasizes that it was only a temporary solution, and says that he hasn&rsquo;t smoked in months.

But for nearly five years, he said, it was what helped the former infantry sergeant transition back to civilian life and deal with his symptoms.

Their company from the 1st Battalion of the 16th Infantry Regiment was sent to Iraq in late 2003 as the insurgency gained strength. They patrolled in Bradley fighting vehicles, operating out of a base at al-Habinya, between Fallujah and Ramadi.

&ldquo;The time when all the contractors were getting killed and strung up on the bridges? We were there for all that,&rdquo; Raines said.

Several of Raines&rsquo; fellow soldiers were killed in action not long after they arrived. Staff Sgt. Mark D. Vasquez and Staff Sgt. Gary L. Collins died after a roadside bomb attack on Nov. 8, 2003. Sgt. Ryan C. Young died a month later of his wounds from the same assault.

&ldquo;That takes us to August 2004,&rdquo; Raines said softly as he continued the story. &ldquo;My most memorable [experience], and what I struggle with to this day: Sgt. Daniel M. Shepherd of Ohio, a really good friend.&rdquo;

Raines last saw Shepherd as they were about to head out on a Bradley mission, he recalled. Shepherd, commander of another Bradley, rode by, and the two friends jokingly exchanged obscene gestures.

&ldquo;I heard the explosion. I thought it was a building,&rdquo; Raines recalled.

But when he reached Shepherd&rsquo;s vehicle he saw only wreckage.

&ldquo;Two daisy chains, South African 155 [howitzer rounds] went off, something along those lines,&rdquo; Raines said. &ldquo;It just chewed him up, killed him instantly.&rdquo;

As a sergeant in a combat zone, Raines didn&rsquo;t have the luxury to grieve for his friend, either then or much later. He told his troops to stop crying, remember that they couldn&rsquo;t use excessive force just because one of their own had been killed, and keep their heads &ldquo;on a swivel.&rdquo;

In an interview this month, almost seven years after Shepherd&rsquo;s death, the emotion was still raw.

&ldquo;He got killed about 22 days before us leaving country,&rdquo; Raines said. &ldquo;His wife had a kid while he was over there and he never even got to meet him.&rdquo;

At Fort Riley, after the deployment, Raines dealt with back and shoulder injuries, along with horrible memories he couldn&rsquo;t shake. Diagnosed with PTSD, the Army put him on all kinds of prescription drugs: Zoloft, Seroquel and &ldquo;some other antidepressants, but God I can&rsquo;t remember the names.&rdquo;

He insists he &ldquo;never, ever touched any other drugs than the ones I was prescribed when I was in [the Army],&rdquo; but the combination of prescription side effects and his drinking &ldquo;to help drown the pain&rdquo; affected his ability to function.

He could have been in real trouble, but he was fortunate that Westbrook was still his sergeant.

&ldquo;[He] was getting upset about it, but he understood the situation,&rdquo; Raines said. &ldquo;After all, I fought until my heart was black and blue with him in battle more than once.&rdquo;

Raines wasn&rsquo;t the only good soldier that Westbrook was responsible for who had been diagnosed with PTSD and was having trouble with the side effects of prescription medications.

&ldquo;I had probably had a dozen at least at any given time,&rdquo; Westbrook said. &ldquo;The drugs that they were giving them &hellip; they couldn&rsquo;t get up in the mornings. I&rsquo;d be banging on their doors or at their houses trying to get them up. Most of the guys weren&rsquo;t the type of soldiers who had issues before Iraq or even in Iraq, but they bring them back and put them on these drugs, and they&rsquo;re falling asleep in the chair.&rdquo;

Westbrook described himself as a traditionalist who had no tolerance for illegal drug use, but he said talking with Raines recently about marijuana led him to reassess as well.

&ldquo;Whatever they were putting them on, basically that was their idea &mdash; dope them up,&rdquo; said Westbrook, who retired from the Army last year and lives in North Carolina. &ldquo;There was no way they could function, especially in a civilian job. So maybe marijuana is an alternative.&rdquo;

Back home in Ohio after his discharge in 2006, Raines no longer had an understanding boss like Westbrook to cut him some slack. He was angry and anxious. His marriage fell apart. He thought constantly about the most difficult times in Iraq, and about the friends he&rsquo;d lost, especially Shepherd.

He enrolled at nearby Defiance College on the GI Bill, but he had a hard time just making it to class. He thought back to how he&rsquo;d felt the few times he&rsquo;d used marijuana in high school.

&ldquo;I got out in August 2006 and started using around October, maybe November,&rdquo; he recalled.

He bought from &ldquo;buddies on campus&rdquo; or other people he met. The drug helped him immediately, and while it was illegal, he said he wasn&rsquo;t worried about getting caught even as he began using it every day.

But that&rsquo;s all in the past, Raines said, and it&rsquo;s part of why he&rsquo;s more willing to share his experience now.

He said he hasn&rsquo;t smoked since he graduated from college with honors earlier this summer, and things are looking much better. He got a job as an network administrator and computer security expert for an insurance agency. He&rsquo;s engaged to &ldquo;an excellent fianc&eacute;e who supports me 100 percent.&rdquo;

Earlier this month, he and some of the soldiers from his Army platoon had a reunion near a lake in Michigan. He still feels like their platoon sergeant, and wanted to listen to their stories and offer help rather than burden them with his struggles. They all talked about the difficulties in transitioning to civilian life, but Raines never mentioned his marijuana use.