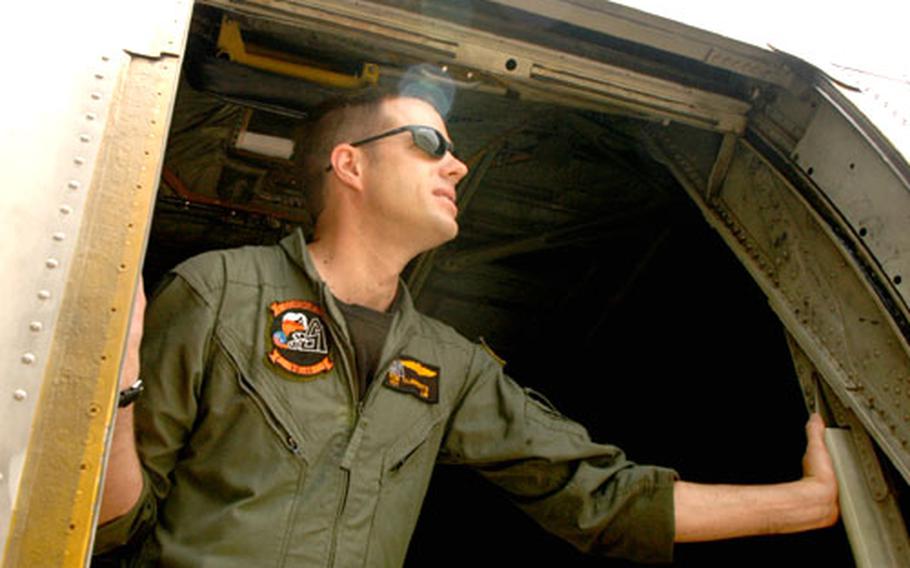 Petty Officer 1st Class Ron Clements, a C-130 loadmaster from VR-64, looks out from his aircraft Tuesday at Atsugi. (Christopher B. Stoltz / S&S)

Petty Officer 1st Class Ron Clements, a C-130 loadmaster from VR-64, looks out from his aircraft Tuesday at Atsugi. (Christopher B. Stoltz / S&S) 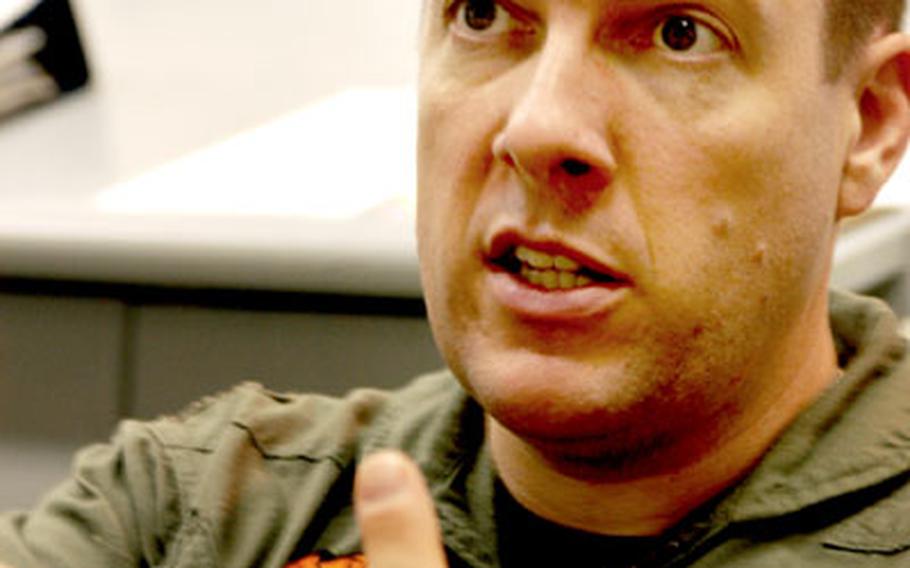 During an interview Tuesday at Atsugi, Lt. Cmdr. Tom Long, a C-130 pilot from VR-64, talks about the ways his squadron helps Navy logistics. (Christopher B. Stoltz / S&S)

NAVAL AIR FACILITY ATSUGI, Japan &#8212; A year ago, the pilots, maintenance personnel and aircrew of the Naval Reserve squadron The Condors, from Willow Grove, Penn., were part of a P-3 squadron. They were practiced in the art of hunting submarines and watching the seas.

That changed Sept. 17, 2004, when the entire squadron converted to a new mission, name and aircraft.

The Condors, previously VP-64 and now VR-64, transformed into an airlift squadron, flying logistics missions in a C-130. The squadron sent its first detachment to Atsugi in late May.

Aircrew members who once manned submarine-detection equipment now balance weight loads; pilots who once flew long-range missions from one single airfield now fly into and out of a variety of airfields on any single mission.

During the three-week trip to Atsugi, the detachment moved people and supplies to Australia, Guam, South Korea, all over Japan and several other Pacific islands.

Being part of a logistics squadron also can offer immediate gratification: pleased reactions from the people arriving at their destination or receiving their supplies.

In the States, the squadron once carried Marines home after a deployment to Iraq.

&#8220;You land and all the families are out there. It&#8217;s rewarding,&#8221; said Lt. Cmdr. Tom Long, the officer in charge of the detachment to Atsugi and the squadron&#8217;s maintenance officer. Now an active-duty reservist and P-3 pilot, he previously flew helicopters, including with HSL-51 at Atsugi.

Dropping bombs during training in his old P-3 capacity was exciting, he said, but delivering mail to troops in Iraq &#8212; during a detachment to Bahrain with a different C-130 squadron &#8212; offers its own very unique rewards. He also now works with different ground crews and with more unusual cargo.

Besides mail, Navy C-130s have carried SEALs, small boats and even trained dolphins.

Many of the squadron&#8217;s pilots transitioned from the P-3 to the C-130, which pilots said is somewhat similar to fly. Many also are pilots in their day jobs. Liston is a pilot for Delta Air Lines.

Lt. Cmdr. Trevor Blow, pilot training officer in the squadron, is a furloughed pilot from United Airlines. Commercial flights, he said, are similar to the C-130: made to move people and packages. &#8220;It&#8217;s one type of logistics to another type,&#8221; he said.

Squadron VR-64, The Condors, flies two C-130T Hercules. The T model does many of the same functions as other C-130 models but adds air refueling. The most famous T-model Hercules belongs to the Navy Blue Angels. Named &#8220;Fat Albert,&#8221; it carries the team&#8217;s support and maintenance crew and supplies.

The squadron falls under Commander, Fleet Logistics Support Wing, the Navy&#8217;s largest wing, which is the primary operator of logistics aircraft for the Navy. The wing sends detachments to Atsugi, Sigonella, Italy, Bahrain and South America. The wing&#8217;s squadrons also fly logistics support throughout the States.