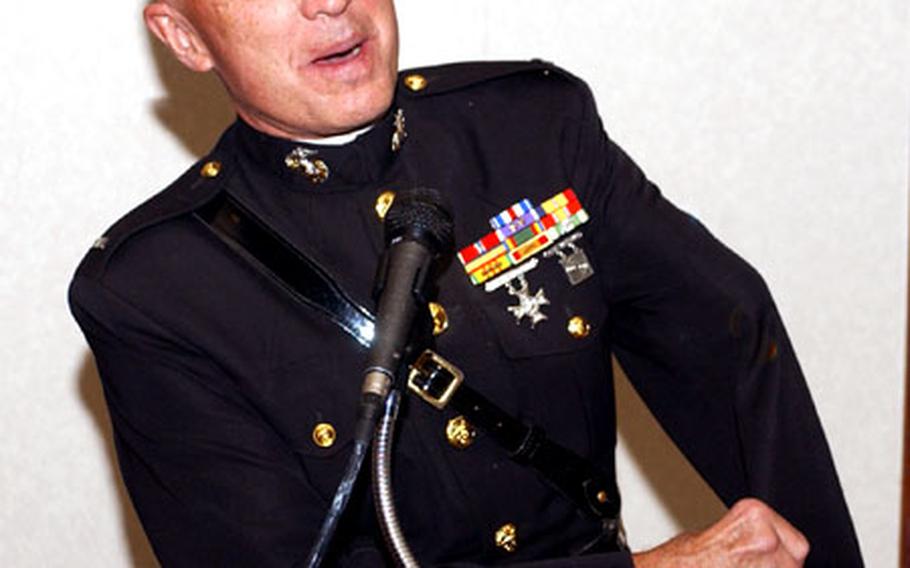 Former Marine Corps Lt. Clebe McClary speaks to the audience at the 48th Fighter Wing Commander’s National Prayer Luncheon. McClary, a Vietnam veteran and motivational speaker, recounted an attack in 1968 in which he lost his left eye and left arm. (Courtesy of the 48th Fighter Wing Public Affairs Office)

RAF LAKENHEATH &#8212; At one time, all Clebe McClary ever wanted to do was coach football.

But a life-altering battle during the Vietnam War, his recovery and decision to become a motivational speaker made sports a mere afterthought.

Roughly 300 people came to RAF Lakenheath&#8217;s Eagle&#8217;s Nest to hear McClary deliver a message that he has spread across all 50 states and 30 countries. He has spoken to groups ranging from national championship college football teams to prison inmates.

McClary&#8217;s 24-minute speech, delivered in his deep South Carolina accent and peppered with bits of wit and wisdom, kept the audience spellbound. He hit on topics ranging from combat to spirituality. He opened the speech by recounting the events of March 3, 1968. That was the day the unit he was leading, the 1st Reconnaissance Battalion, came under attack deep in enemy territory.

He was severely wounded, losing his left eye and left arm in the battle, but continued to lead his men long enough for the unit to be evacuated shortly before his location was overrun by the enemy.

He was awarded the Bronze and Silver stars for his actions and endured 30 surgeries, 2&#189; years in hospitals and countless hours of physical therapy.

But McClary, with help from his wife, Deanna, said he remained positive and turned his personal triumph into the backdrop for his motivational speeches.

During his address to the RAF Lakenheath airmen, he decried a litany of war movies, encouraged the audience to read Tom Brokaw&#8217;s &#8220;The Greatest Generation,&#8221; and lashed out at people who burn American flags.

But in the end, he stayed true to the luncheon&#8217;s theme and reminded the audience of the importance of faith.