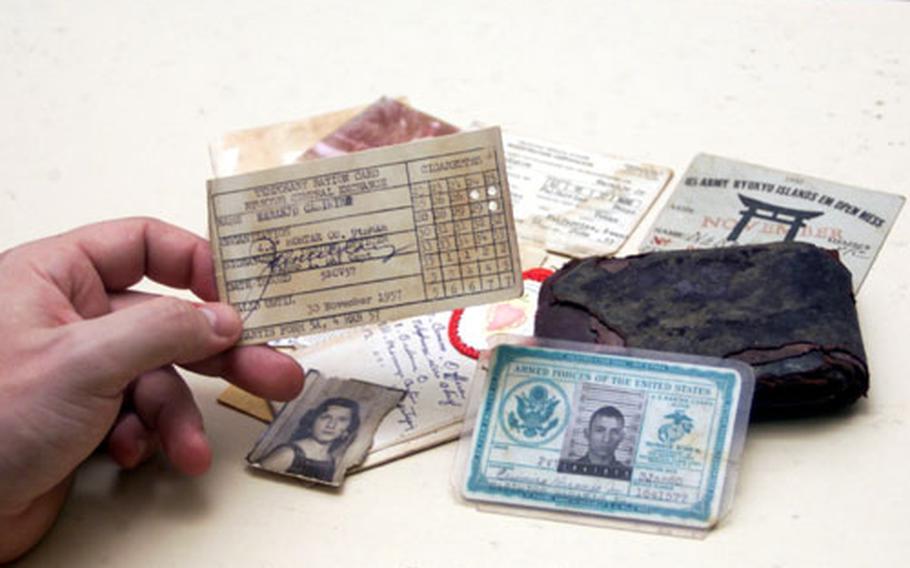 The contents of Casimiro Naranjo&#39;s wallet, lost on Camp Foster in 1957, includes the former Marine&#39;s ID card, rations card and a pawn ticket. The wallet was found in May during renovations to the Butler Theater. (Courtesy of USMC)

CAMP FOSTER, Okinawa &#8212; Casimiro Naranjo is getting a kick out of the 15 minutes of fame brought him by a wallet he lost here 45 years ago.

&#8220;Today I was on a radio talk show live from Australia,&#8221; an excited Naranjo said in a telephone interview Tuesday from his home in Falfurrias, Texas. &#8220;And a Houston TV channel had two stories about me and there was a station in Austin and newspapers from Corpus Christi and Japan.&#8221;

Fame caught up with Naranjo, 66, a former Marine, when a Japanese workman renovating Butler Theater found an old wallet half buried in a mud-caked ventilation duct.

Inside was Naranjo&#8217;s Marine ID card, a rations card, pawn-shop ticket and photos of friends and family. Marine officials tracked Naranjo through the old ID card and mailed the wallet to him in July.

Among the photos were pictures of his sister, Mary, and a woman friend whose name he said he&#8217;d forgotten long ago.

&#8220;I think that was worth only about five bucks back then but it was enough to buy a couple of Nippon beers and a teriyaki steak,&#8221; he said.

Naranjo, assigned to a communications platoon of 2nd Battalion, 9th Marines, was sent to Camp Fuji.

Camp Zukeran was an Army camp, renamed Camp Foster when the Marines took it over in the 1970s.

Naranjo figures he lost the wallet one day when going to the movies. Unknown is how the wallet landed where it was found: in a ventilation duct.

Naranjo, a retired senior operator for Exxon in Eastern Texas, said he has fond memories of his time in the Marine Corps.

Among the valued items in the wallet was a ration card signed by a Capt. James L. Day.

Day was a former enlisted man who took part in the bloody battle of Okinawa in the spring of 1945. He eventually rose to the rank of brigadier general and received a belated Medal of Honor in January 1998 for his actions during a particularly tough fight for a small hill named Sugar Loaf, now a reservoir sitting in the middle of a new shopping district in Naha. He died nine months after receiving the medal, at the age of 73.

Still, the most precious item returned with the wallet was a small Sacred Heart patch that his mother, Gertrudis Naranjo, gave him the day he boarded a bus for boot camp.