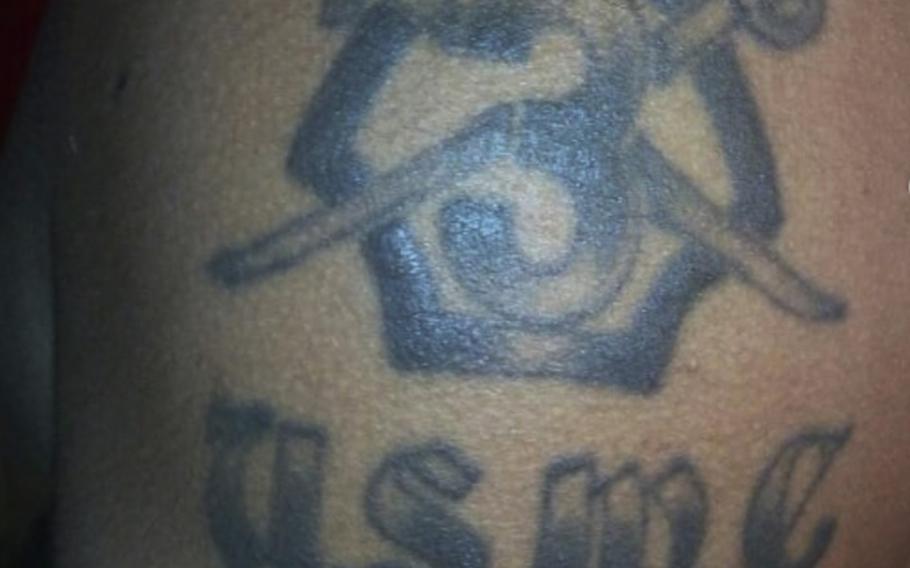 CAMP FOSTER, Okinawa — A former Marine arrested last month in connection with a grisly drug-related homicide on Taiwan has ties to the nearby island of Okinawa and may have been disciplined prior to leaving the service nearly a decade ago.

Ewart Odane Bent, 30, was taken into custody Aug. 24 by Taiwanese police in the killing of Ramgahan Sanjay Ryan, a 43-year-old Canadian who was hacked to death with machetes and dismembered on the evening of Aug. 21, according to the English-language Taiwan News.

Both Bent and Ryan were English teachers who were reportedly involved with a local drug ring.

Bent served in the Marines from Dec. 6, 2006, to Aug. 7, 2009, as a cryogenics equipment operator, Marine Manpower and Reserve Affairs spokeswoman Yvonne Carlock said in a statement emailed to Stars and Stripes. His last duty station was on Okinawa with Marine Aviation Logistics Squadron 36, Marine Aircraft Group 36, 1st Marine Aircraft Wing. He attained the rank of private on Dec. 2, 2008.

“Bent’s rank at discharge is indicative of the fact that the character of his service was incongruent with Marine Corps’ expectations and standards,” she said.

Carlock declined to release a copy of Bent’s personnel file pending review, nor could she comment further because Bent was not punished through a punitive process such as a special or general court-martial.

“Due to the associated administrative processes, further details are not releasable,” she said.

Bent isn’t listed as having ever deployed, Carlock said. He did not receive any personal awards but was decorated with the Sea Service Deployment Ribbon, Global War on Terrorism Service Medal and the National Defense Service Medal.

‘Heated disputes’ It is unclear when Bent moved to Taiwan; however, Taiwanese media have reported that he arrived at the behest of Israeli-American tattoo shop owner and former Israel Defense Forces soldier Oren Shlomo Mayer, 37. The Hong Kong-based tabloid Daily Apple described Mayer as a “drug dealer” and the “largest supplier of marijuana in northern Taiwan.”

Mayer’s LinkedIn page says he moved to Taiwan in 2015 after living and working at various places in California.

Bent taught at Annie’s English cram school in New Taipei’s Linkou District as well as two other branches in New Taipei City’s Xinzhuang District, according to the Taiwan News. He reportedly slept on a couch at Mayer’s tattoo shop for a time and also lived in a dormitory provided by the school.

Taiwanese media said that the victim, Ryan, became known to police after an investigation into marijuana sales led them back to him earlier this year. He was reportedly arrested with a large amount of marijuana but was released.

Bent and Mayer were also arrested in recent weeks on drug charges, the Taiwan News reported. They suspected Ryan had informed on them.

Ryan had “heated disputes” with Mayer and Bent over drugs, the Taiwan News said.

The slaying Mayer and Bent are alleged to have ambushed Ryan while he walked his dog at a riverside park in New Taipei City.

The pair allegedly moved Ryan to a secluded area, tied him down with a chain and hacked him with the machetes, the Taiwan News said. They then severed his head and limbs with a wire saw, and the body parts were placed in white trash bags and dumped in the Xindian River.

Police began to focus the homicide investigation on Bent because Ryan’s phone showed they had argued over drugs, the Taiwan News said. Bent’s phone also placed him in the area at the time of the killing.

Bent was taken to the New Taipei Public Prosecutor’s Office after his arrest, but it remains unclear whether he has been officially charged in the slaying.

He had a bail hearing Aug. 26 and was not released, the English-language newspaper Taipei Times reported. His communications with the outside world are reportedly being restricted.

Bent has denied involvement in the slaying, said the Taiwan News, citing the Daily Apple.

Mayer fled to the Philippines shortly after the slaying, the report said. Taiwan has been working with the Philippine government to have him extradited.

Police also arrested Wu Hsuan, 21, a Taiwanese-Canadian man who works as a promoter for a Taipei nightclub, the Taiwan News reported. Wu allegedly colluded with Bent and Mayer in selling drugs at the club.

He admitted to police that he purchased two machetes for the men on Aug. 18 and stood lookout while they killed Ryan, the Taiwan News said. He was later released on about $10,000 bail, and his attorneys have since denied that he was present at the time of the killing.