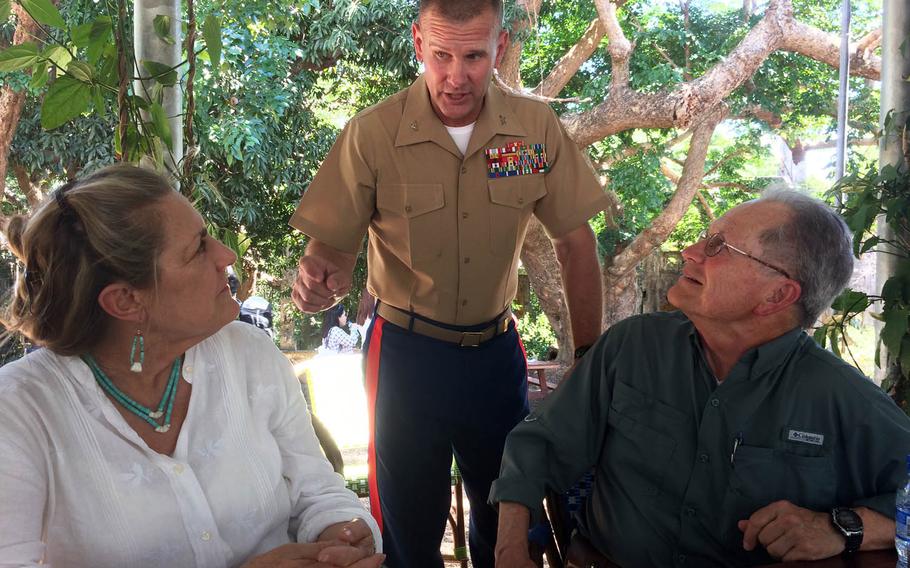 Buy Photo
Col. Kevin Norton, center, 4th Marine Regiment commander, speaks with Sandra Harding, whose mother and father were prisoners of war in the Philippines during World War II, and Dennis Scheuermann, who was born in a Japanese POW camp on the island nation, Saturday, May 6, 2017, in Corregidor, Philippines. (Seth Robson/Stars and Stripes)

Buy Photo
Col. Kevin Norton, center, 4th Marine Regiment commander, speaks with Sandra Harding, whose mother and father were prisoners of war in the Philippines during World War II, and Dennis Scheuermann, who was born in a Japanese POW camp on the island nation, Saturday, May 6, 2017, in Corregidor, Philippines. (Seth Robson/Stars and Stripes) 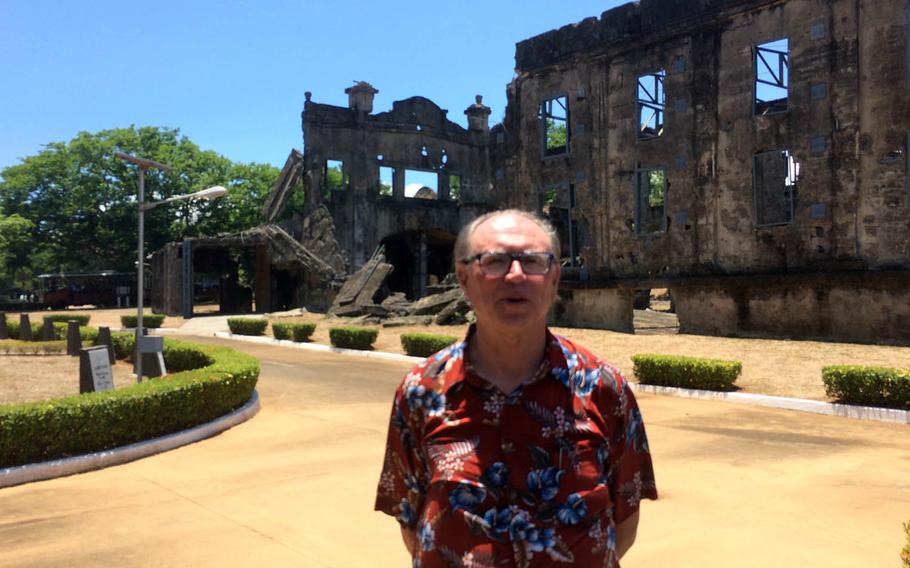 Buy Photo
Steve Kwiecinski, 65, of Virginia, Minn., whose Army staff sergeant father was captured by the Japanese on Corregidor during World War II, stands in front of the ruins of an old theater on the Philippine island, Saturday, May 6, 2017. (Seth Robson/Stars and Stripes)

The 75-year-old former Navy electronics technician was born shortly after the island nation fell to Japan in May 1942. His father, an American mining engineer, along with his mother and 3-year-old sister, were interned with POWs and other allied civilians.

Scheuermann visited the Philippines last week with other relatives of American WWII veterans and traveled to Corregidor to participate in a ceremony commemorating the 75th anniversary of the surrender of U.S. forces on the island.

The fall of Corregidor — not recaptured until 1945 — marked America’s defeat in the Philippines and the Far East.

“The doctor who delivered me was bayonetted by the Japanese along with his staff later in the war,” he said during a lunch with members of the Okinawa-based 4th Marine Regiment, who also took part in the recent ceremony.

The family ended up with more than 2,000 other POWs and civilians at Los Banos, an agricultural school-turned-detention facility in southern Luzon.

“Gen. Douglas MacArthur [supreme commander of Allied forces in the Southwest Pacific] got word that Los Banos was going to be a kill camp where the Japanese would kill everyone if they were threatened,” Scheuermann said.

To stop that from happening, troops from the 11th Airborne Division and Filipino guerrillas mounted a daring raid, killing hundreds of Japanese and freeing the prisoners. But the situation was still precarious because a Japanese division was camped only a mile away, Scheuermann said.

“There were 55 Amtracs [amphibious tractors] and they put all the POWs on them and drove across a lake to escape,” he said.

Scheuermann’s family continued to live in the Philippines after the war. He has fond memories of a former guerrilla named Joso who looked after him as a child, teaching him how to make a bow and arrow and a crystal radio.

They were separated when her father went south to train Filipino scouts while her mother stayed on Corregidor until it fell on May 6, 1942. The pair survived POW camps and reunited in Denver after the war, she said.

Harding visited several places on Corregidor that she had seen in photographs kept by her parents, including a huge swimming pool, now overgrown, and Fort Mills Hospital, where her mother worked.

Kwiecinski grew up listening to his father’s stories about the island and became so fascinated that he moved there with his wife between 2008 and 2015. Walter Kwiecinski crewed a 12-inch mortar that scored hits on 12 Japanese landing craft during the invasion, he said.

“It was the last big gun firing on the island,” he said.