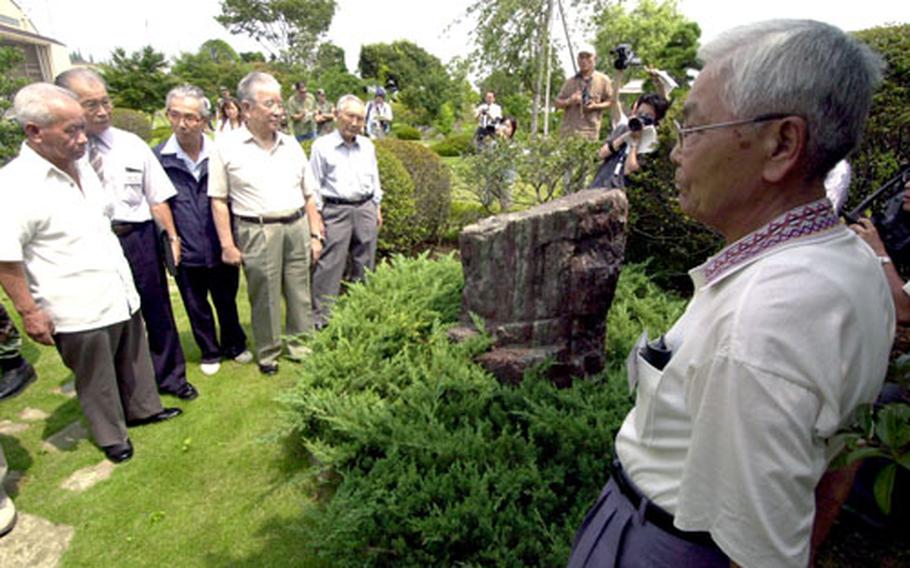 Former Japanese army pilots and maintenance personnel who worked in the 1940s at Tama Army Airfield, the predecessor of Yokota Air Base, visit the base facilities Tuesday in commemoration of the 60th anniversary of the end of the World War II. (Christopher B. Stoltz / S&S)

The men, all members of the Hayabusa Club &#8212; an association of people who worked at Tama Army Airfield &#8212; walked the grounds that once stood as a fighter squadron&#8217;s flight test center, where they served as pilots and maintenance personnel during the 1940s.

The hourlong visit also included a stop at &#8220;Kofu Rock,&#8221; which sits in the distinguished visitors garden on Yokota&#8217;s flight line. It was presented to the base on April 10, 1944, when Emperor Showa, also known as Hirohito, visited to inspect developments in Japanese army aviation and provide encouragement to troops.

Seeing Kofu Rock again was particularly significant for Ito, he said, given its link to Emperor Showa.

&#8220;The emperor was head of Japanese military forces and a symbol of unification for the people,&#8221; he added. &#8220;We regarded the emperor as a living god.

&#8220;At that time, we did everything we could do, according to the order of the emperor. We did our best for defending and securing of our nation. But we loved flying.&#8221;

Akira Imamura was the lone pilot among the group, which also included Sanji Tanaka, Kazuichi Tanaka, Tatsuo Hara, Toyosuke Yamato and Saburo Yamauchi, all maintenance officers during the war.

Ito said his affinity for aviation hasn&#8217;t wavered over the past six decades. Neither has his respect for the U.S.-Japanese alliance.

&#8220;Real peace has been maintained for the past 60 years,&#8221; he said. &#8220;At the same time, this peace should be maintained forever. The relationship is very important. We think the American people have been doing their best to maintain the peace.