The official portrait of former Secretary of Defense Ash Carter is hung at the Pentagon in Washington, D.C., Feb. 2, 2018. Carter served as the 25th defense secretary from February 2015 until January 2017. (Kathryn Holm/Department of Defense)

The official portrait of former Secretary of Defense Ash Carter is hung at the Pentagon in Washington, D.C., Feb. 2, 2018. Carter served as the 25th defense secretary from February 2015 until January 2017. (Kathryn Holm/Department of Defense) 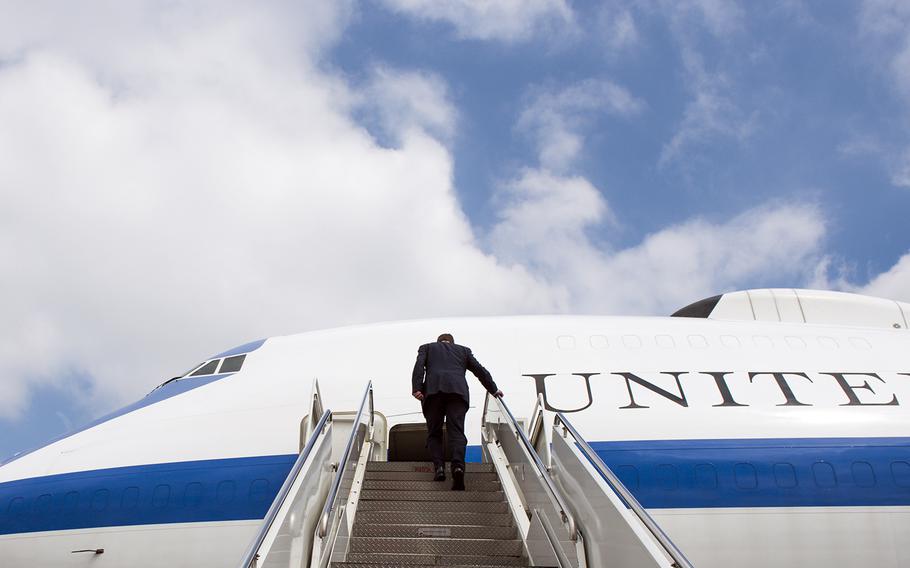 "Inside the Five-Sided Box: Lessons from a Lifetime of Leadership in the Pentagon" by former Defense Secretary Ash Carter was released by Dutton Books on June 11, 2019. (Courtesy of Dutton Books)

Reining in cost overruns on the F-35 Lightning II stealth fighter, planning to defeat the Islamic State in Iraq and Syria and responding to Beijing’s territorial claims in the South China Sea were all part of former Defense Secretary Ash Carter’s two years at the helm of America’s largest enterprise — the Department of Defense.

The backstories behind some of the biggest issues faced by the department during Carter’s tenure, from February 2015 to January 2017, are told in “Inside the Five-Sided Box: Lessons from a Lifetime of Leadership in the Pentagon,” which he discussed in an interview coinciding with the book’s release Tuesday.

A section of the book deals with the F-35, which, at a projected cost of more than $428 billion, is the Pentagon’s most expensive weapons program ever.

The F-35 “was in deep trouble,” Carter wrote of problems he started dealing with as undersecretary of defense for acquisition, technology and logistics in 2009.

“It was costing twice as much to design and develop as planned, projected manufacturing costs had also doubled, and the schedule was slipping every year,” he wrote.

“It was such an embarrassment that I was afraid it wasn’t going to survive politically,” Carter told Stars and Stripes. “That would have left three of our services, as well as a lot of allies, without a next-generation tactical fighter aircraft.”

Carter’s book details the steps he took to improve management of the F-35 program, which included replacing its manager and a threat to manufacturer Lockheed Martin that the department might not buy any of its jets.

“It’s the most ambitious airplane and the largest number of airplanes,” he said. “These are generation five airplanes and there are 2,443 of them. The costs have come down and it is meeting the objectives that were set for it.”

The F 35 will almost surely be the last generation of tactical fighter developed, as changes to battlefield technology are expected to make such aircraft increasingly vulnerable in decades to come, Carter says in the book.

“Whatever replaces the tactical fighter in warfare is likely to be even more advanced and complex, representing an equally daunting acquisition and management challenge,” he wrote.

‘Winning the peace’ The fight against the Islamic State group in Iraq and Syria was another big part of Carter’s tenure as defense secretary. He said he never doubted that the group would be defeated — the extremists were ejected from their last stronghold in Syria in March. But he said he still worries about “winning the peace.”

To that end, “… the U.S. shouldn’t be signaling, either in Iraq or Afghanistan, that it intends to withdraw its influence or its remaining troops,” he told Stars and Stripes.

Carter also said he has fond memories of talking to troops on ships at sea or in war zones. The messages he gave them stressed the importance of their missions and let them know “that the country is behind them and the leadership is behind them.”

A section in his book on dealing with the media praises The Associated Press, Reuters and some other major newspapers and television networks but takes issue with “would be scandal mongers” in search of stories to sensationalize.

“It often seemed as if half the press corps was trying to outdo one another in the cleverness of their ‘gotcha’ questions,” he says in the book.

News outlets cutting back their war zone coverage has led to reports by local stringers who are often biased toward some local faction with a slanted view of regional politics, he wrote.

Carter also criticized the lack of reporting by the U.S. media about success in combat, something he said would have made headlines in the past.

“So when things were going well … there were almost no stories telling of Iraqi forces gathering strength and courage with the support of American troops,” he wrote. “On those days, the papers would simply be devoid of war news. Only when the inevitable setbacks occurred did the coverage resume.”

Carter wrote about the importance and value of America’s alliances around the world but added:

“There’s truth in [President Donald] Trump’s complaints that some of our alliances — our NATO partners, for example — don’t contribute their full share to the project of joint defense. Every recent U.S. administration has called our allies to task on this score.”

The rebalance of U.S. military forces to the Pacific, underway during Carter’s tenure, has continued, as have Chinese efforts to claim territory in the South China Sea.

There needs to be pressure on Beijing to conform to international norms, not just from the U.S., but from other nations in Asia, he told Stars and Stripes.

Tariffs are one way of confronting China, he said before adding that there are other tools that can be used. Not joining the Trans-Pacific Partnership, which links several of America’s Pacific friends and allies, is a mistake, Carter said.

“It’s in our interests to be aligned with that bloc. It was a way to combine with the rest of Asia to create a trading system,” he said. “If you don’t do that, you leave the battlefield to China and the other nations.”

Summit meetings between Trump and North Korean leader Kim Jong Un haven’t led anywhere yet. That’s not surprising, he said, given that other negotiating efforts dating to the 1980s never got far.

Carter said he’d focused on making sure U.S. missile defense was a step ahead of North Korean capabilities and letting the North Koreans know that, if they started a war, they would lose.

A hawk in his stance on Iran, Carter said he thought the shelved deal to prevent that nation from developing nuclear weapons had been fine if it was obeyed. However, he added that he had told Defense Department leaders not to change their position on Iran because of the deal.

‘It’s not about me’ Carter’s book also covers weapons procurement, manpower, recruitment, retention, pay and benefits. It was written for servicemembers and civilians working for the department and it’s dedicated to them, he said.

“It describes parts of the department that they may not have gotten into and may never get into,” he said. “It’s not about me. It’s not a Washington kiss and tell. It’s a book about the Department of Defense.”

It also has plenty of lessons for managers, be they in government or the private sector, said Carter, who is now director of the Belfer Center for Science and International Affairs at the John F. Kennedy School of Government at Harvard University.

“I hope there are some younger people who read it and decide that public service and especially military service is a noble way to spend their lives,” he said.