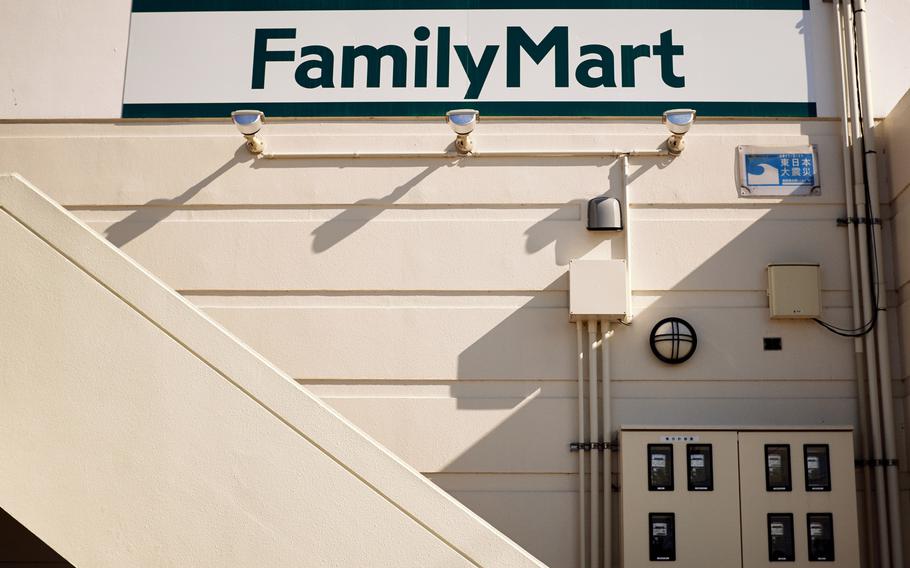 The small blue sign under the store name at the old Nobiru Station shows how high the water reached during the tsunami five years ago. The water covered the entire first floor. (James Kimber/Stars and Stripes)

The small blue sign under the store name at the old Nobiru Station shows how high the water reached during the tsunami five years ago. The water covered the entire first floor. (James Kimber/Stars and Stripes) 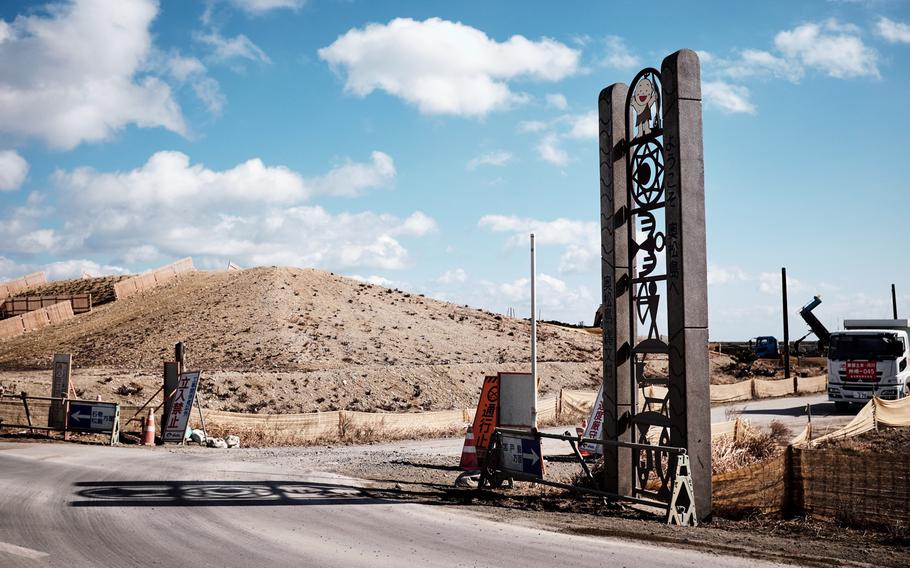 A sign welcoming guests to Okumatsushima near Nobiru, Japan, is all that is left of the area Feb. 10, 2016. Construction efforts in the area include a large sea wall that could protect against a recurrence of the massive tsunami five years ago. (James Kimber/Stars and Stripes) 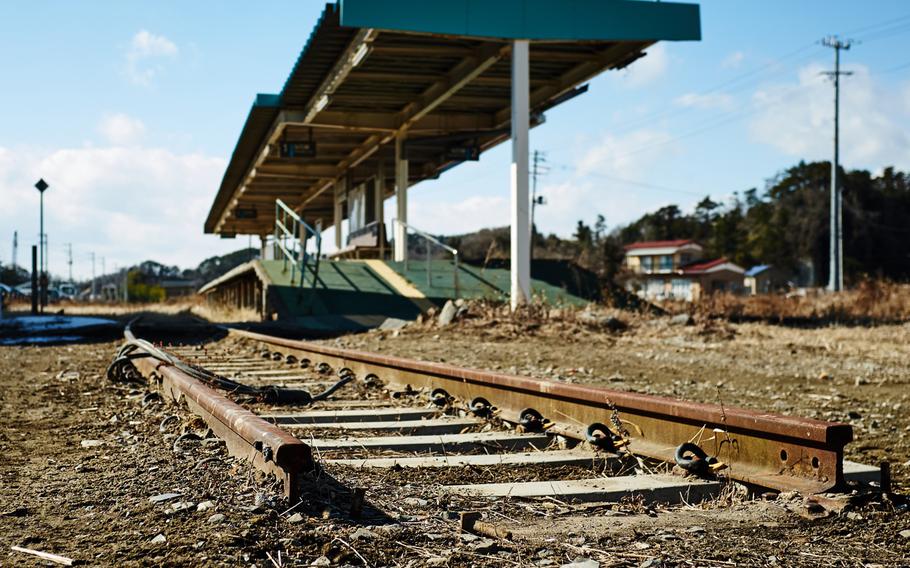 The tracks are cut off less than 20 yards from the abandoned platform at Nobiru Station in Nobiru, Japan, Feb. 10, 2016. The entire train station was underwater when a tsunami hit the town March 11, 2011. (James Kimber/Stars and Stripes) 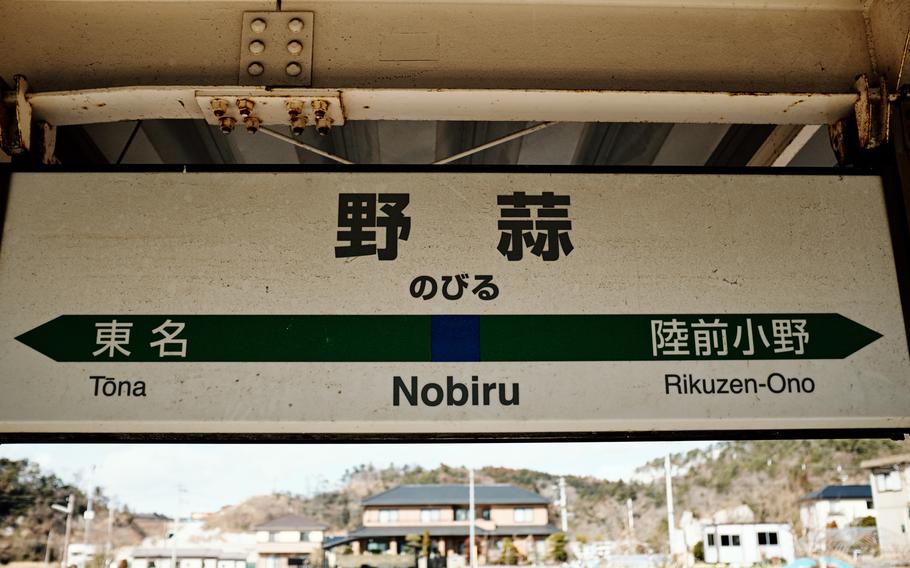 The neglected sign at Nobiru Station collects dirt and rust Feb. 10, 2016, in Nobiru, Japan, five years after the station was abandoned during the massive tsunami that hit the area. A new Nobiru Station was rebuilt on higher ground and opened last year. (James Kimber/Stars and Stripes) 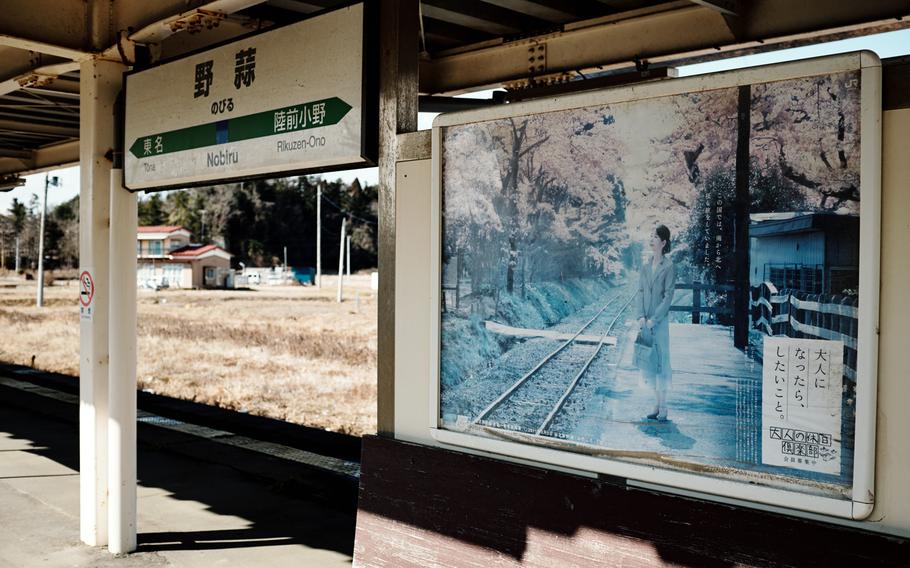 An advertisement for the Tohoku Shinkansen, or bullet train, remains at the abandoned platform at Nobiru Station in Nobiru, Japan Feb. 10, 2016. The ad, intended for travelers over the age of 50, reads, "In this country, cherry blossoms also travel from south to north." The bullet train, running from Tokyo to Shin-Aomori Station, began operating March 5, 2011, less than a week before a tsunami devastated the town. (James Kimber/Stars and Stripes) 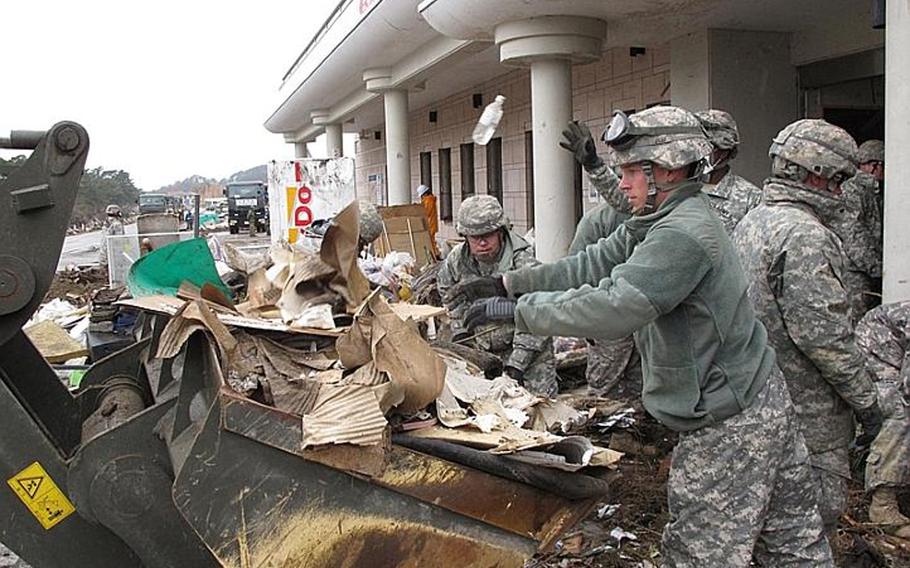 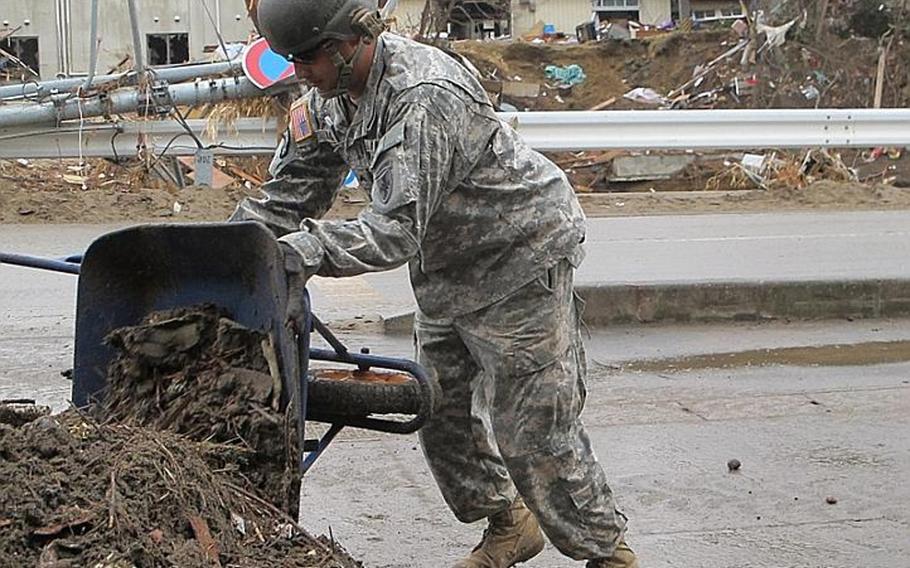 HIGASHIMATSUSHIMA, Japan — A reconstruction worker on his lunch break walks by the framed pictures of U.S. soldiers that he’s passed by several times before — but this time, he really looks.

The soldiers in the photos are shoveling filth and debris out of what was Nobiru Station in April 2011.

It is now the remarkably clean community building in which he is standing.

Other pictures show the area across the street, where hundreds lost their lives in a tsunami on March 11, 2011. Several houses washed away, leaving little but foundation stones and the things that used to matter to the people who lived here — family albums, children’s dolls, tattered dresses.

The worker remarks how different it all looks now, then heads over to the convenience store that shares half of the building.

Across the street, however, there are only dirt mounds and fencing. The dirt isn’t even the original sand-flecked coastal soil, where pine trees and other plants managed to survive the flooding. It’s dry and empty, and the only thing growing is a thin, leafless thorn bush.

This was a neighborhood where salaryman retirees from Tokyo built their dream homes by the sea and where generations of fishermen lived a short drive from their boats. Most of the people here are now are on their way somewhere else or working on building the seawalls and breakwaters that the government hopes will stop future tsunamis.

“The visitors won’t understand what it was like when the disaster hit just by looking at landscape,” says a city employee sitting behind a small table, next to a stash of colorful tourist brochures in at least six languages.

After 42 soldiers from Camp Zama and Torii Station joined up with Japanese forces to clean out Nobiru Station five years ago, Higashimatsushima city planned to tear it down.

The city decided to remodel instead and turn it into a community center. Family Mart opened in May 2014. Tourists and aid workers kept returning and asking the convenience store employees questions, so the city opened up the photo exhibit.

On the building’s wall closest to the store parking lot, a sign several feet overhead shows how high the water crested.

In front of the parking lot, a few rails remain in front of the old Nobiru station platform. The platform advertisements from 2011 are faded but still readable in their frames.

The Senseki line train, which once served commuters every few minutes, no longer stops here. It moved inland with the rest of the community, far enough for safety, but not so far that the old residents can’t come back when they need to mourn.

For at least one woman, today is one of those days. She stands across the street from the old station, utterly silent, head bowed before a pile of dirt.