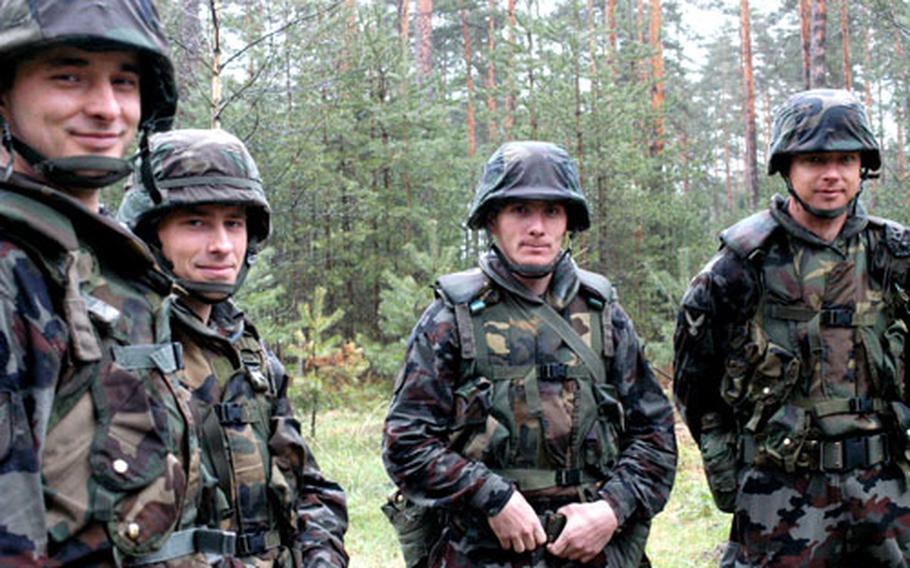 GRAFENW&#214;HR, Germany &#8212; When Russian and American armies first met in what was then East Germany 60 years ago this week, they traded cigarettes and handshakes. Then for decades, they shared a mutual suspicion across the Iron Curtain.

Now, as members of the two armies work together at Grafenw&#246;hr&#8217;s Noncommissioned Officer Academy, the former Cold War opponents are exchanging something else: training techniques.

For the first time in the history of the 7th Army Training Command NCO Academy, a group of six Russian and four Slovenian soldiers will graduate next week from the U.S. Army&#8217;s primary program to develop noncommissioned officers.

Piloted by groups of Polish soldiers starting in 2003, the program has expanded to include more nations at the behest of U.S. Army Europe commander Gen. B.B. Bell, Sykes said.

This week, the visiting soldiers performed some of their first field exercises and battle drills in the woods outside Grafenw&#246;hr&#8217;s newly refurbished campus.

The visiting students said the exercises were a great relief from monotony after three weeks of chalk talk.

All 10 soldiers are already NCO-equivalent officers in their own armies, and much of the book learning was redundant, they said.

But soldiers from both nations said they are gleaning valuable information from watching how the U.S. trains its noncommissioned officers and learning how American forces are structured.

&#8220;Based on what we learn, we can assess what the sergeant must do, how you must do it, and the qualities soldiers must have,&#8221; Aleksandr Bakayev, a Russian sergeant first class, said through an interpreter.

The troops said they will relay their experience to soldiers in their own armies when they return home next month, possibly assimilating parts of American training into their NCO schools.

But one of the biggest goals of the program is simply to let soldiers from different nations interact, talk shop and trade techniques, said the Russian contingent&#8217;s commander, Col. Vasilij Dynda.

In that program, Russian-speaking American enlistees were paired with Dynda&#8217;s unit for the monthlong NCO course.

But Dynda also said he thought less class time was necessary, and would like to enroll troops in higher-level officer training if Russian students return to Grafenw&#246;hr.

&#8220;Because we get such positive results and because being here has gone so successfully, we&#8217;ve got the idea that we shall probably come back,&#8221; he said.