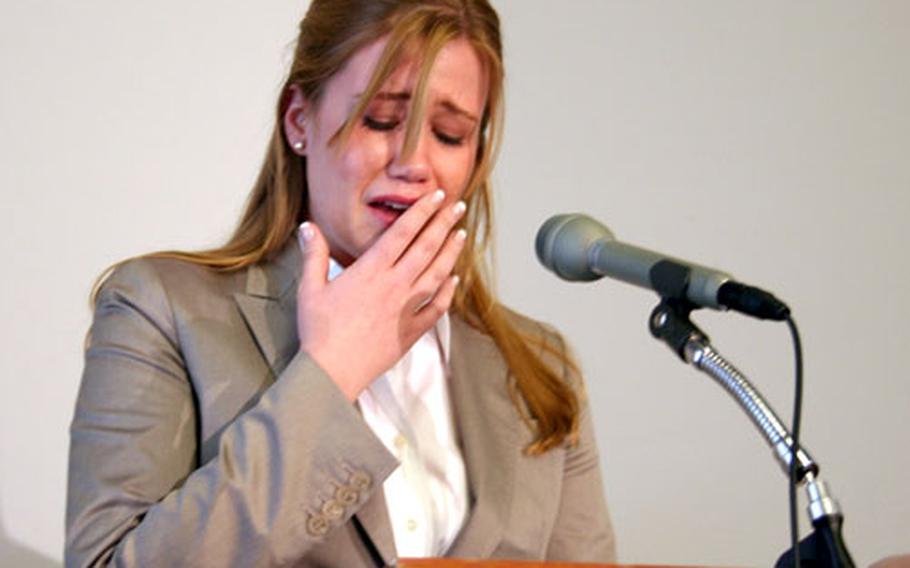 Caitlin Stopper, 20, holds back tears as she recalls sexual harassment as a cadet at the U.S. Coast Guard Academy in 2005. Last week, she and other women spoke at an event highlighting problems in the military’s response to sexual crimes. (Leo Shane III / S&S)

ARLINGTON, Va. &#8212; Despite the Defense Department&#8217;s focus on sexual assault, the military justice system &#8212; particularly the Army&#8217;s Criminal Investigative Command &#8212; continues to hold attitudes that are &#8220;antiquated and extremely damaging,&#8221; according to a former agent.

&#8220;What I&#8217;ve seen [as a CID agent] indicates a serious problem that affects not only its victims, but the armed services, local communities, and relations with host countries as well,&#8221; Myla Haider told participants of a Thursday forum on Capitol Hill on combating sexual assault and domestic violence in the U.S. Armed Forces.

&#8220;There should be targeted training to overcome outdated beliefs within the military justice system,&#8221; Haider said during the forum. Such improvements &#8220;are desperately needed to ensure victims have a chance at the justice they deserve,&#8221; said Haider, who left the Army in October.

But CID spokesman Chris Grey said agents &#8220;are committed to being sensitive to the needs of victims while at the same time ensuring we solve any and all alleged crime.&#8221;

Grey said that the command, which retains the acronym CID, has had such a program in place since the summer of 2005, when &#8220;CID began a very comprehensive Sexual Assault Sensitivity Training program [which is] mandatory for all special agents.&#8221;

Agents must attend the program every year, where instructors &#8220;introduce various training topics and techniques with each installment,&#8221; Grey said.

Pentagon statistics reveal the depth of the problem, Haider said.

Of the 1,386 military sexual assault investigations in 2005, almost half, or 641, were dropped because the cases were &#8220;unfounded, lacked sufficient evidence, or the victim recanted,&#8221; according to a Pentagon sexual assault report provided to Congress earlier this year.

&#8220;There may be evidence that could be found, but the main focus is on why the victim is lying, not collecting evidence,&#8221; she said.

Haider transferred into the CID in 2003 after spending eight years as a military intelligence specialist, she told Stars and Stripes in an Friday interview from the University of Maryland in College Park, where she is now studying to be a psychologist.

From the time she began her training at the U.S. Army Military Police School, Haider said, &#8220;I noticed a consensus among my classmates that the majority of rape victims were lying to suit some personal agenda.&#8221;

But Haider said that all military law enforcement personnel who deal with victims of sexual assault, including CID agents, should receive special training from civilian victims&#8217; advocates who are &#8220;familiar with the trauma of sexual assault and the dynamics involved with acquaintance rape,&#8221; the most common kind of rape.

Haider said she went through CID&#8217;s new training program at Fort Campbell, Ky., right before she left the Army, and that it &#8220;wound up pretty much being a circus of jokes about victims. It&#8217;s really not taken that seriously.&#8221;

The instructors, Haider said, should be &#8220;civilian advocates familiar with the trauma of sexual assault,&#8221; not CID agents.

However, since Haider&#8217;s departure, Grey said in an Monday e-mail to Stripes, CID &#8220;has brought in outside instructors at all of our locations to conduct a second round of mandatory sexual assault training to all agents.&#8221;