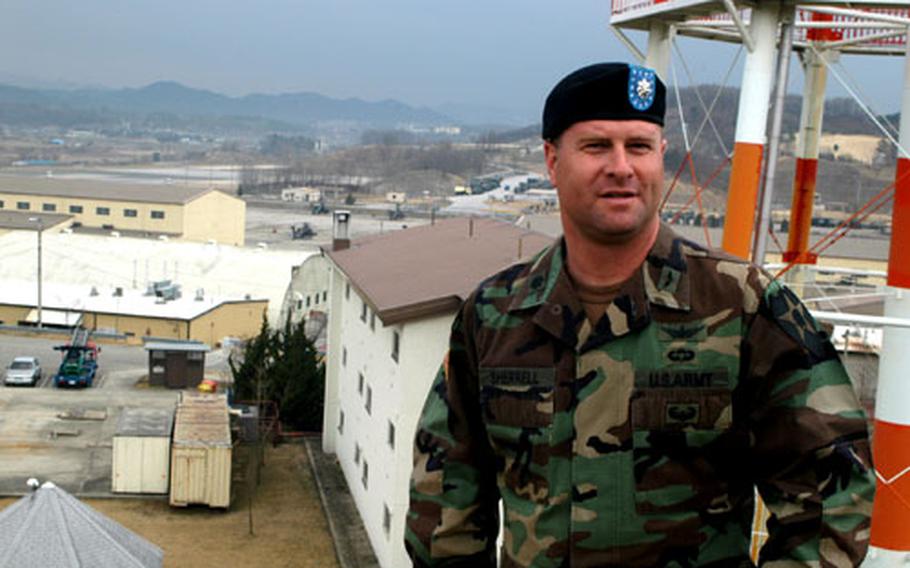 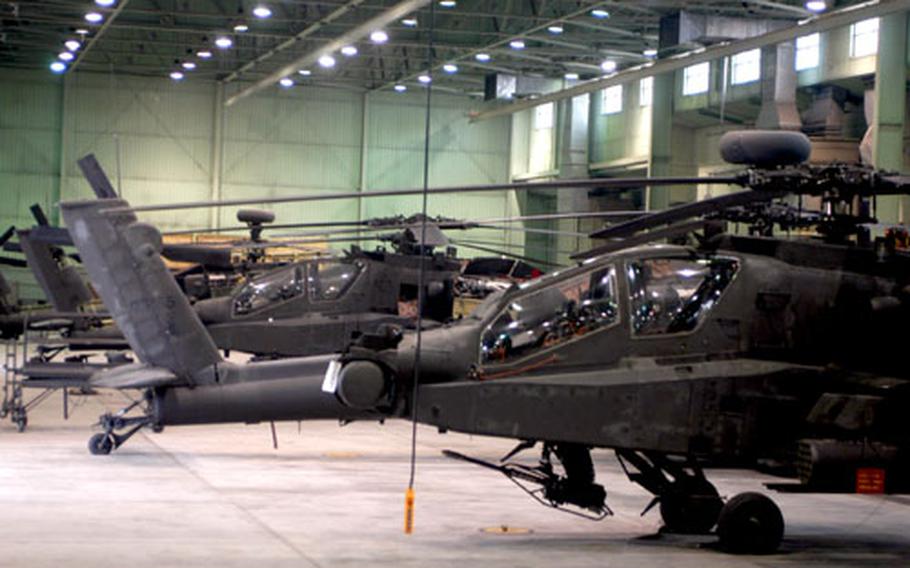 CAMP EAGLE, South Korea &#8212; Soldiers from 1st Battalion, 2nd Aviation Regiment have traded dogs for cars and a bustling city for the roar of jet engines after moving to Camp Eagle near Wonju.

The move, which followed last month&#8217;s closure of the unit&#8217;s old home at Camp Page, near Chunchon, involved going from Area I, where soldiers cannot drive their own cars, to Area III, where senior enlisted soldiers and officers can drive their own vehicles. However, while soldiers in Area I are allowed to have pets, there is a ban on dogs at Camp Eagle.

One of the 1-2 soldiers, Capt. Sarah Pierce, 27, of Wausau, Wis., the 1-2 administration officer, said the new rules mean the unit has had to sort out guidelines about where soldiers can park cars on-post and is looking for new homes for several pet dogs. Exceptions to the no-dog rule will be sought for several unit mascots, she said.

The last 1-2 soldiers arrived at Camp Eagle on March 25, joining about 350 of their comrades and 18 Apache Longbow attack helicopters, she said.

The lack of a commissary at Camp Eagle is an issue for some soldiers, herself included, who enjoyed shopping at the Camp Page commissary, Pierce said.

The Defense Commissary Agency is starting a mobile commissary at Camp Eagle and there are moves to get a hard-standing commissary built at the base, she said.

Other facilities at Camp Eagle, such as the indoor basketball court, weight room, indoor pool and the Community Activity Center known as the Eagle&#8217;s Nest are as good or better than those at Camp Page, she said.

Regiment commander Lt. Col. Chandler Sherrell said a lot of work has gone into restoring Camp Eagle, which has been empty since 1st Battalion, 6th Cavalry Regiment left the base for Fort Hood, Texas, in February 2004.

The base was supposed to be returned to the South Korean government, but then the decision was made to close Camp Page and re-station 1-2, he said.

1st Battalion, 2nd Aviation Regiment Apache pilot Chief Warrant Officer Thomas Frierson, 41, of Spring, Texas, said it was a challenge moving so many soldiers, transporting their equipment and household goods and getting an &#8220;almost mothballed facility&#8221; up and running.

Another Apache pilot, Chief Warrant Officer Mike Apple, 41, of Dothan, Ala., said it will take a while to get Camp Eagle into shape.

Meanwhile, the 1-2 soldiers are getting used to the roar of jet engines from K-46, a South Korean air force base next door that doubles as a civilian airport for Wonju City. Three squadrons of F-5 jet fighters, A-37 jet trainers and commercial airliners come and go from the air base throughout the day.

There are negotiations toward allowing 1-2 to use the K-46 runway for training that the unit used to do at Camp Page, Sherrell said. Camp Eagle has a large helipad but no runway.

Another change 1-2 soldiers are getting used to is being surrounded by countryside. Camp Eagle is bordered by the air base, a golf course and rolling tree-covered hills. Camp Page was in the heart of the city of Chunchon.