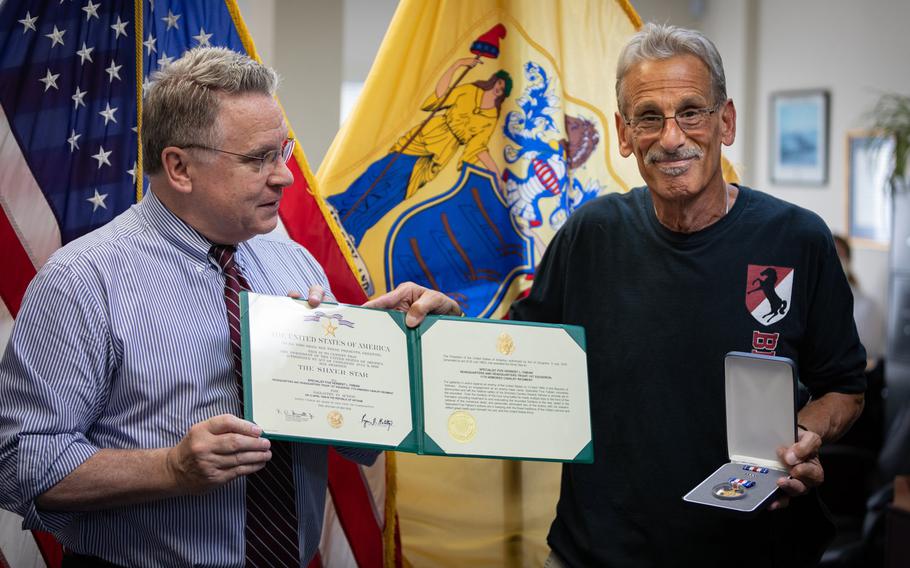 A Vietnam veteran has received his second Silver Star more than five decades after he earned it in a fierce battle at an enemy base camp, where he saved the lives of 10 other soldiers.

Bart “Doc” Fabian, a medic with the 11th Armored Cavalry Regiment during the war, received the medal during a ceremony in Rep. Chris Smith’s office in Freehold, N.J., on Saturday.

He’d been promised the medal a day after the roughly hourlong battle of April 13, 1969, but “it just never happened and I let it go,” Fabian said.

But he began seeking it out two years ago, hoping to share it with the twin sister of one of the 19 soldiers killed in the battle — his vehicle commander — he said in a video interview recorded by MidJersey.news after the ceremony.

During the April battle, Fabian left the “relative safety of his armored cavalry assault vehicle” to tend to wounded comrades, making several trips to the front of the formation to treat them and move them to safety, said a citation Smith read from at the ceremony.

Fabian also killed two enemy fighters with his sidearm and recovered the bodies of several slain comrades, the citation said.

Six men from his cavalry troop were killed, including a close friend, said a statement from Smith’s office.

“Thank you for your bravery — it’s just extraordinary,” Smith told Fabian at the ceremony.

The Silver Star is the military’s third-highest decoration for combat bravery. Fabian also earned two Bronze Stars, two Purple Hearts and an Army Commendation Medal with Valor during the year he served in Vietnam.

He earned an earlier Silver Star on January 11, 1969, in Binh Long province, where the entire crew of his personnel carrier was wounded when their platoon was ambushed.

Fabian took a fully exposed position as he treated and evacuated the wounded. Then, returning to the fight, he grabbed a machine gun and laid down suppressive fire before breaking an enemy assault that nearly overran another group of wounded Americans.

“It’s about your buddies. You just try to do your best so we all get home,” Fabian said.

Harold Fritz, his troop commander during the January battle, earned the Medal of Honor for gallantry that day. Among other heroic actions, the wounded officer, armed with only a pistol and bayonet, led an effort to repel a second wave of attackers.

After Fabian shared his story of the April firefight at an event attended by Fritz and other Medal of Honor recipients a few years ago, his former commander encouraged him to seek out the Silver Star, Fabian said.

“He told me that you don’t give your awards away, the awards are to be shared with everybody — don’t individualize it,” Fabian said. “And I follow orders.”