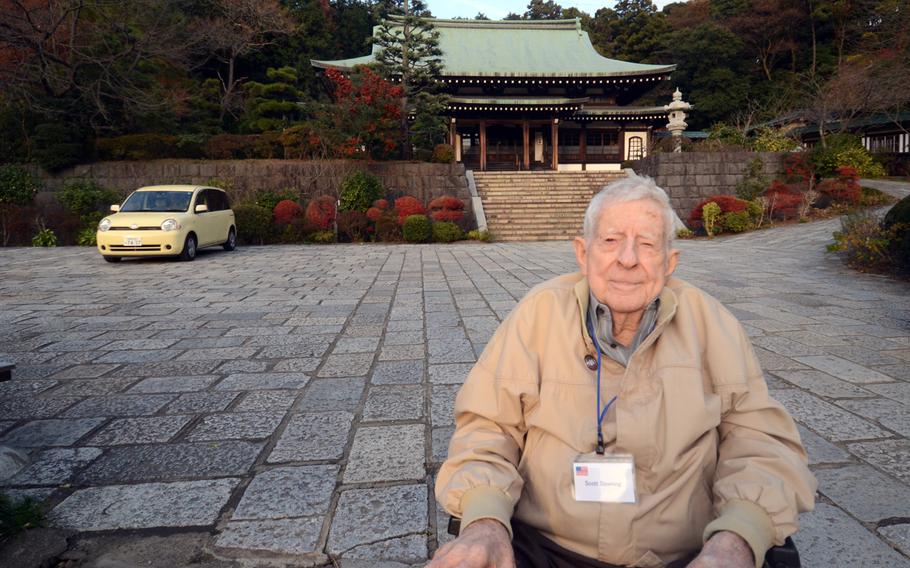 Scott Downing, 96, visits Ryuhoji, a Buddhist temple, in Kamakura on Dec. 7, 2015, along with four other former U.S. servicemembers taken as prisoners of war by Japan during WWII. A prison camp once stood across the street from where the temple is now located. (Erik Slavin/Stars and Stripes)

Scott Downing, 96, visits Ryuhoji, a Buddhist temple, in Kamakura on Dec. 7, 2015, along with four other former U.S. servicemembers taken as prisoners of war by Japan during WWII. A prison camp once stood across the street from where the temple is now located. (Erik Slavin/Stars and Stripes) 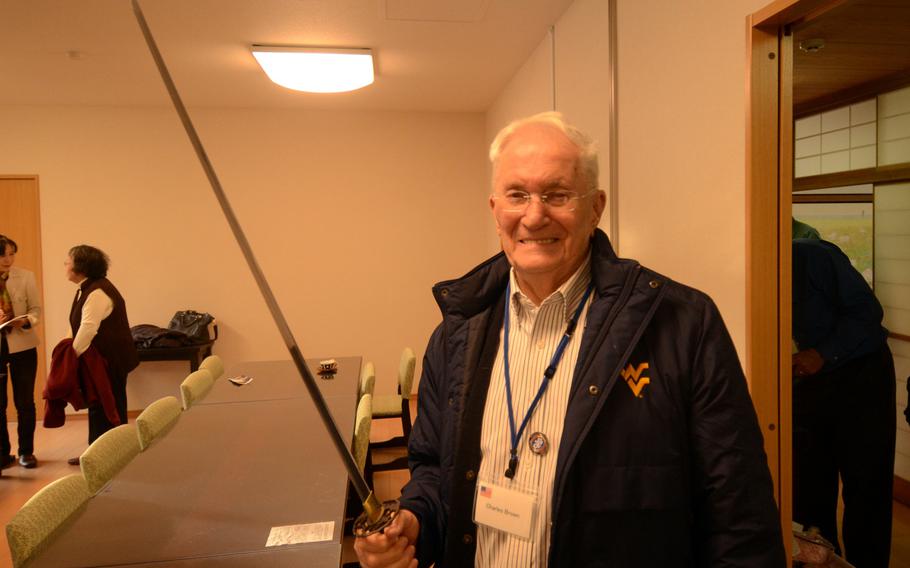 Charles Brown, 91, holds a WWII-era Japanese Imperial Navy sword owned by a local resident who came to meet with Brown and other former U.S. prisoners of war at Ryuhoji, a Buddhist temple, in Kamakura on Dec. 7, 2015. Brown was detained in 1945 at a prison camp that once stood across the street. (Erik Slavin/Stars and Stripes) 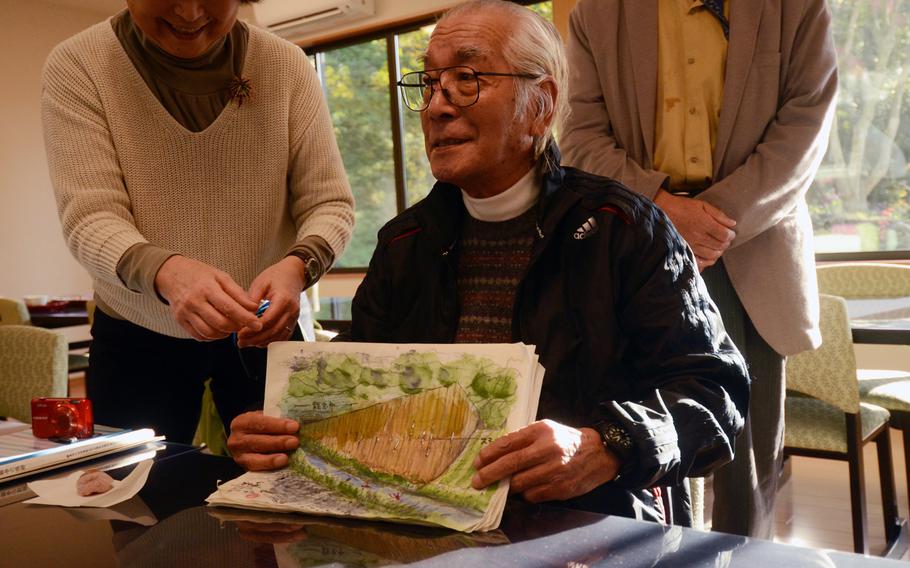 Takashi Horio, a local resident, displays a picture he drew of Ofuna Naval Interrogation Center as a child at a Buddhist temple in Kamakura, Japan, on Dec. 7, 2015. Five former U.S. prisoners of war and some of their family members are touring Japan in a program funded by the Japanese government. (Erik Slavin/Stars and Stripes)

KAMAKURA, Japan — The Buddhist temple of Ryuhoji lies down a pathway a few hundred feet from a quiet street, in a town an hour from Tokyo by train, but far more distant in character.

The manicured pine trees and the vermillion-toned bushes of Japan’s autumn frame the temple’s tiled roof and wooden supports.

There is peace here, for the five American men in their 90s who pull into the temple’s driveway. Two first came to this spot blindfolded and beaten as prisoners of war in 1944 and 1945.

“The place has changed so much that it really doesn’t remind me of Ofuna as I knew it,” said Charles Brown, 91.

Brown, a World War II naval aviator, says he might feel differently if the tunnel he was marched through on the way to his first month of solitary confinement was still visible.

The only visible remnants of the Ofuna Naval Interrogation Center, which stood across the street from where the temple is now, are pieces of a watchtower peeking out of the grass and dirt in a family’s yard.

Brown and William Connell, 91, both of whom were prisoners at Ofuna, are among five former World War II prisoners touring several sites and meeting with Japanese citizens this week as part of a trip financed by the Japanese government.

As aviators, they weren’t treated like the other prisoners; Once out of solitary confinement, guards separated them from the other POWs and wouldn’t let them speak to their countrymen.

“We were considered criminals because we bombed the [Japanese] homeland,” Brown said.

Brown, a resident of Kingwood, W.Va, and Scott Downing, 96, of Amarillo, Texas, toured the temple’s ornate halls and displays Monday, along with a few family members and translators. The temple’s head monk then guided them to a small room in the back, where the remains of Japanese soldiers lie in wooden boxes next to a shrine for the former prisoners of war.

“I come here and say a prayer for them every morning,” the monk said.

The group then met with local residents who, as children, tried to peek through the knotholes of the prison camp.

Takashi Horio showed them 70-year-old pictures he drew of the camp’s exterior, including a roof marked “ABC” — he didn’t remember the letters for POW as a child. Another depicted an American guarding a Japanese prison guard, just after the war ended.

A woman named Fukuda told Brown that she used to see beef, fish and other foods stored in iceboxes, which she thought at the time was being delivered to prisoners at the camp.

She said couldn’t see that the prisoners’ diets were far more sparse — some supplemented their meager rations with tree roots.

“I was a school child and I couldn’t get in the camp then,” she told Brown.

Brown laughed. “I couldn’t get out,” he said.

Ofuna is where Brown learned to smoke. If he killed 100 flies at the camp — an easy haul near the toilets — he would earn one cigarette. He was later transferred to the Omori POW Camp #1, an island built by prisoners where all five of the men on this week’s tour ended up before the end of WWII.

The group includes Downing, who would later work as an interrogator for Japanese suspected of Class C war crimes; Connell, of Edina, Minn.; Fiske Hanley II, 95, a former Army officer from Fort Worth, Texas; and, Donald Ryan, 93, an Army tail gunner living in Sebring, Fla.

It took Brown 50 years to tell his story to his family and others. He said he was inspired by author and former news anchor Tom Brokaw’s effort to document WWII history. Sharing his experiences helped him get over nightmares, he said.

Most of the men on the tour have visited Japan since the war at least once before. This is Brown’s third trip.