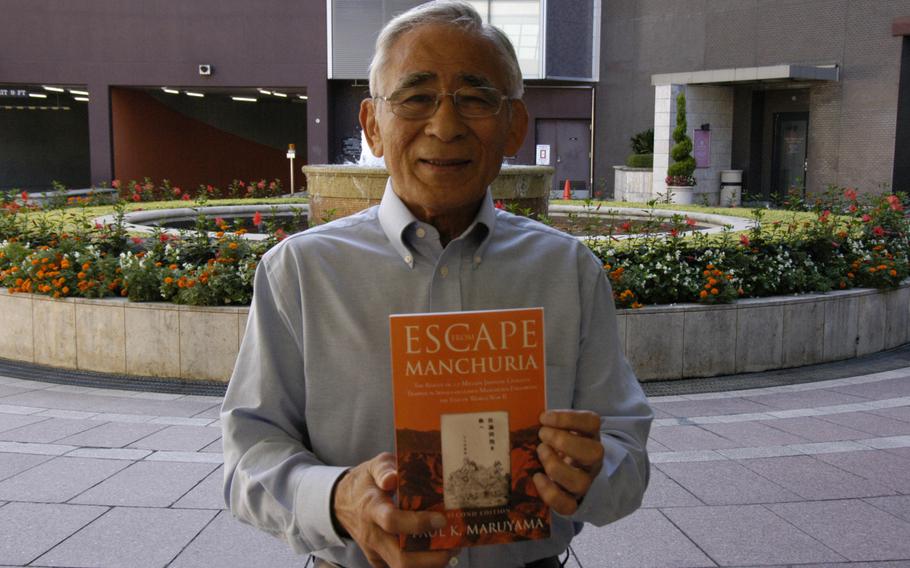 Retired U.S. Air Force officer and Olympian Paul Maruyama with his book, ''Escape from Manchuria,'' during a book signing in October in Tokyo. (Seth Robson/Stars and Stripes)

Retired U.S. Air Force officer and Olympian Paul Maruyama with his book, ''Escape from Manchuria,'' during a book signing in October in Tokyo. (Seth Robson/Stars and Stripes) YOKOTA AIR BASE, Japan — Paul Maruyama can talk your ear off about his days as a U.S. Air Force officer in Vietnam or his judo bouts at the Tokyo Olympics.

On a recent visit to promote his book “Escape from Manchuria,” he said he would rather focus on the efforts of his father and two other men to bring home 1.7 million Japanese nationals from Manchuria at the end of the World War II.

Japanese settled in Manchuria in large numbers after the territory was invaded by the Japanese Imperial Army in 1931.

But they found themselves in dire straits after the U.S. dropped the atom bomb on Hiroshima and the Soviet Union declared war and invaded Manchuria in August 1945.

As a boy, Maruyama was among the stranded settlers. His father, Kunio, had gone to the Manchurian town of Dalian as an employee of the Showa Seitetsu steel company. His mother was a second-generation Japanese-American.

“The Japanese in Manchuria didn’t know what was happening,” he said, referring to the Soviet invasion.

Many of the male settlers were drafted into a makeshift force that was quickly overrun by the Russians. Those captured were sent to work camps in Siberia; many were never seen again.

Their families, including elderly, women and children, were left without food or money and faced retribution from the Chinese. Soon they were dying at a rate of 2,500 a day, Maruyama said.

“There was no communication with Japan, and even the U.S. didn’t know what was going on,” he said. “Many relatives in Japan wondered what had happened to their loved ones.”

In desperation. Kunio Maruyama and two other civilians, aided by the Catholic Church, decided to escape from Manchuria and seek help to evacuate others.

The three made their way to the port of Koroto, which was controlled by Chiang Kai-shek’s Nationalist forces, and boarded a ship for Japan.

“When my dad made it to Japan he started a campaign to tell the Japanese people about those left behind in Manchuria,” Maruyama said.

Back in Dalian, the family, protected by the Catholic Church, got word that he was safe when an acquaintance picked up an NHK radio broadcast of him speaking about the situation, he said.

Carrying letters and documents from the Catholic Church, the trio visited Gen. Douglas MacArthur, the supreme commander for the Allied Powers in Japan.

MacArthur was already planning to repatriate Japanese in China but lacked details on the situation in Manchuria. The three escapees suggested any evacuation take place from Koroko, Maruyama said.

“These three filled in the intelligence that the U.S. needed to begin repatriation,” he said.

Kunio Maruyama met his wife before the war while studying for a business degree from Columbia University, so he spoke to MacArthur in English.

“The fact that he could speak English directly to him played a role in having him trust my dad,” Paul Maruyama said.

In May 1946, MacArthur ordered evacuations. More than a million people were picked up at Koroko.

“Many Japanese think their own government repatriated their citizens, but it was MacArthur who sent American ships” with Japanese crews, Maruyama said. “I want Americans to realize the role that MacArthur played. It is one of the things that caused the relationship between the U.S. and Japan to endure all this time.”

Maruyama, his mother and siblings were reunited with their father at Sasebo in December 1946.

Estimates say 1.3 million Japanese made it home from Manchuria. Others died, and some blended in with the local population. The Zanryo Koji (left behind children) are Japanese whose parents were forced to leave them with Chinese families as they fled after the war. Many only discovered their origins years later, Maruyama said.

Another Japanese child stranded in Manchuria after the war was Hikoaki Mori, whose father worked for the Manchurian National Railway Company before being drafted into the army in May 1945.

After the Russians invaded it took Mori and his mother a year to reach Sasebo from their home in northern Manchuria. Along the way his younger brother and sister died of disease and hunger.

“Even now I dream of their faces,” said Mori, who heard later that his father was shot by the Chinese Communists after he and his men surrendered their weapons.

It was only by reading Maruyama’s book that he learned about the efforts to repatriate the settlers.

“It was thanks to three very excellent men that we could return to Japan,” he said. “Without them maybe my mother and I would have died in China.”

After the Maruyama family was reunited, their father began teaching at Meiji University. Their mother, a U.S. citizen, became a Department of Defense civilian clerk at Tachikawa Air Base.

Maruyama attended schools on U.S. military bases in Japan and captained the Yamato High School football team. He represented the U.S. in judo at the 1964 Olympics and coached the Olympic judo teams in 1980 and 1984. During a 22-year career in the Air Force, he served in the Vietnam War and taught martial arts and Japanese at the Air Force Academy.

His book was self-published in 2011 before it was reprinted by publishers in English and Japanese this year.