Riki Ellison poses with airmen and a B-1 Lancer stealth bomber at Andersen Air Force Base, Guam, in December 2017. (Courtesy of Riki Ellison)

Riki Ellison poses with airmen and a B-1 Lancer stealth bomber at Andersen Air Force Base, Guam, in December 2017. (Courtesy of Riki Ellison) 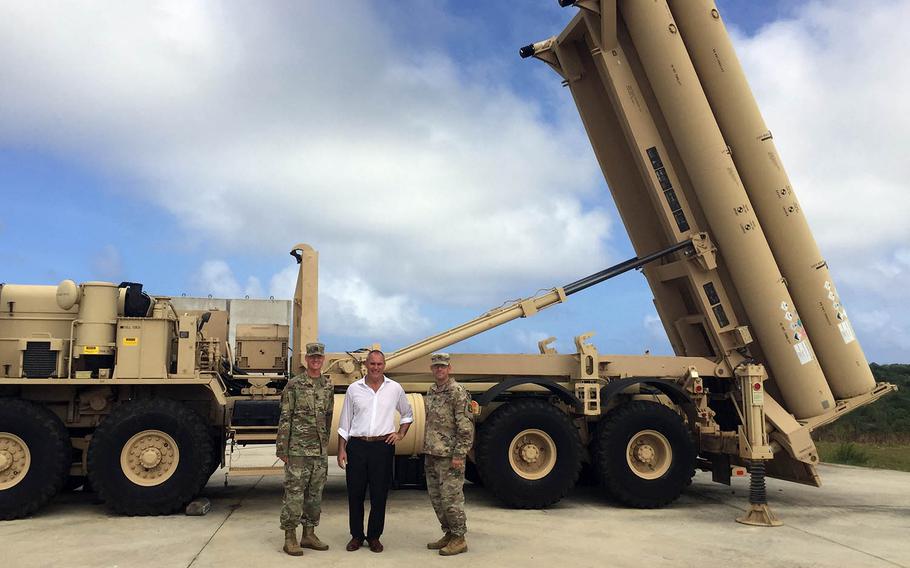 Riki Ellison poses with soldiers and a THAAD missile-defense launcher at Andersen Air Force Base, Guam, in December 2017. (Courtesy of Riki Ellison) 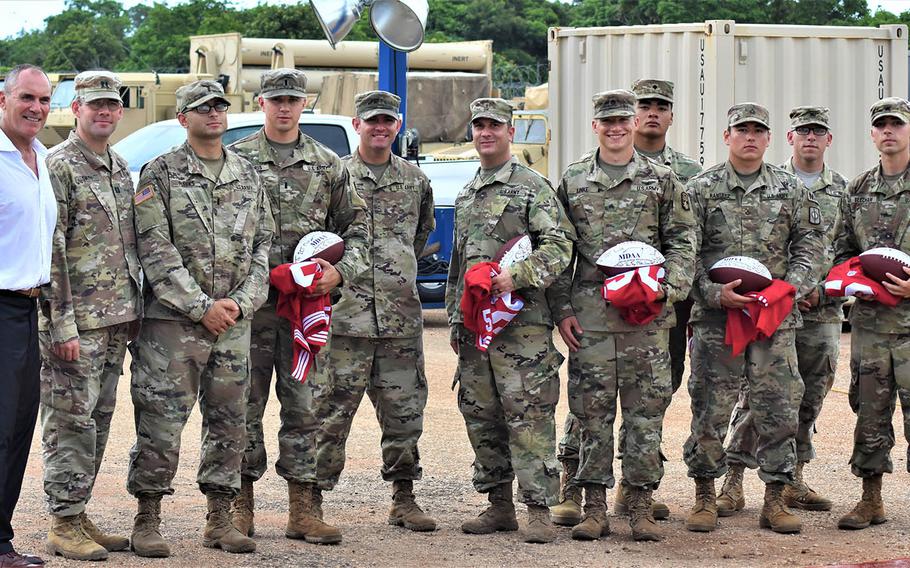 Ellison, 57 — who won a national championship with the University of Southern California before being drafted by the 49ers in 1982 — decided to tackle a new challenge after his playing career ended. In 2002, he founded the nonprofit Missile Advocacy Alliance, or MDAA, to lobby for missile-defense deployment and development.

The New Zealand Maori son of a United Nations economic adviser, Ellison studied international relations at USC and was fascinated by President Ronald Reagan’s Star Wars missile defense effort, which might have been what led him into his present job.

He has a keen grasp of the challenges that the United States and its allies face on the world stage, briefed the national security teams of Donald Trump and Hillary Clinton during the 2016 election campaign, and rubs shoulders with the Pentagon’s elite in Washington.

Earlier this year, the Senate confirmed MDAA board member John Rood as the undersecretary of defense for policy — one of the Pentagon’s most powerful jobs.

Ellison spends much of his time talking to missile defenders and observing rocket tests at far-flung bases and ranges. Late last year he stopped off in South Korea, Japan and Guam to recognize the efforts of dozens of soldiers and airmen.

He followed that up with a trip to Europe before heading to Alaska to recognize missile defenders. In May, he flew to Hawaii to meet with soldiers from all over the Pacific at LANPAC, a symposium and exposition highlighting the role of land forces in the region.

Most of the forward-deployed troops Ellison visits are too young to remember his glory days with Hall of Fame quarterback Joe Montana, but “they get a kick out of my Super Bowl ring.”

Different vibe The vibe surrounding missile defense in the Pacific has changed drastically this year, Ellison told Stars and Stripes in a recent phone interview.

“I felt the intensity in both places [Japan and Korea] was the highest it had been,” he said of his last trip to Far East, which coincided with a string of North Korean nuclear and missile tests.

The alternative to better relations with North Korea is a high likelihood of a conventional strike if Pyongyang resumes missile or nuclear tests, he said.

The successful deployment of missile defense systems by America and its allies has been an important factor in negotiations between the leaders, he said.

“The president will, no way, negotiate from a position of weakness,” Ellison said. “He’s not going into negotiations with North Korea knowing he can’t defend himself from the North Korean ICBM threat.” Missile defense is “the system that is stabilizing the situation.”

Ellison is clearly comfortable talking about international relations, but to get a real sense of where he’s coming from check out the reports he posts on the MDAA website.

Some sound similar to what a football coach might tell players to psych them up for a big game – building up teammates and talking down the opposition.

'A no-win situation' In a note about a visit to Yongsan Garrison in Seoul last year, he described North Korea’s leader as “desperately trying to change the game, in a no-win situation.”

He called South Korea “a thriving top 10 world economy and a bustling innovative and cutting-edge metropolis of nearly 10 million people that were not dictated, distracted or affected by the actions of a desperate North Korean leader.”

Ellison appears to have done plenty of game prep on tensions in North Asia, which, he said, stem from Chinese and Russian efforts to eject America from the region.

“China doesn’t want a united Korea with U.S. forces on the peninsula,” he said. “China, Russia and North Korea want us gone. That’s the key. They’re on the same page with that.”

North Korean nuclear weapons are a problem beyond the threat of those possessed by neighboring countries, he said.

“We are not comfortable with the command and control of those nuclear missiles” in North Korea, he said. “They could be used in a reactive situation and could proliferate.”