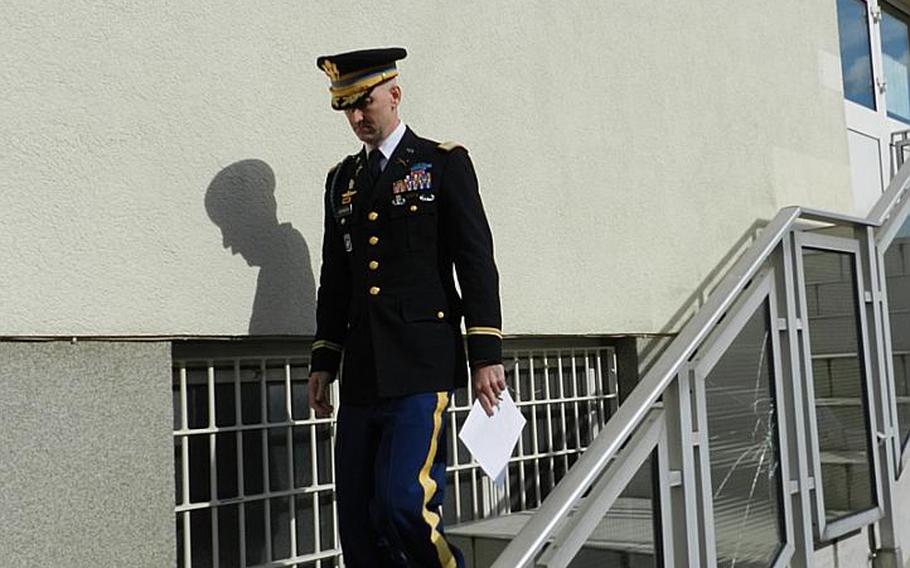 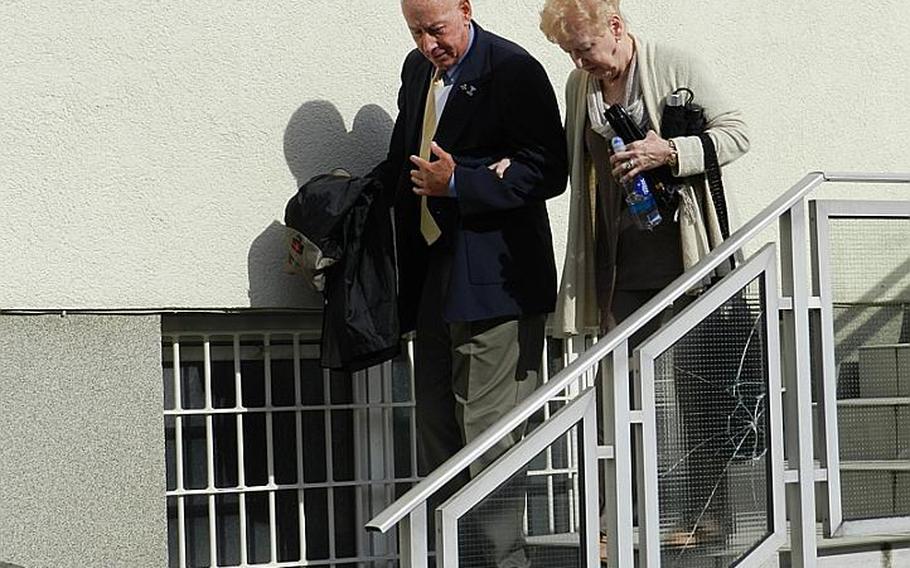 KAISERSLAUTERN, Germany &mdash; Col. James Johnson, convicted of fraud, bigamy, and conduct unbecoming an officer and a gentleman, was sentenced Thursday to a reprimand and a $300,000 fine.

The court-martial panel also imposed a sentence of five years&rsquo; confinement if Johnson, the former commander of the 173rd Airborne Brigade Combat Team, fails to pay the fine. He was not dismissed from the service and was not sentenced to forfeit his pay and allowances. His convictions all had to do with an affair he had with an Iraqi woman he met while deployed and his efforts to help her family.

Thursday&rsquo;s hearing began when Johnson addressed the panel for the first time in the proceedings.

He implored the five colonels deciding his fate to let him leave the courtroom a free man so that he could protect the woman, Haveen Al-Atar, from the damage inflicted by the pair&rsquo;s illict love affair.

"She has nowhere to go,&rdquo; Johnson said. &ldquo;She&rsquo;s hiding in an unnamed hotel, waiting to see if anybody will show back up to care for her,&rdquo; Johnson told the court. &ldquo;I passionately ask that you consider that.&rdquo;

Haveen Al-Atar&rsquo;s father, who has disowned her, has threatened to send her back to Iraq, Johnson said, where she&rsquo;d either live a destitute life on the street or even be murdered in an honor killing. Her ex-husband, whom she was forced to marry, then forced to divorce when her relationship with Johnson came to light and dishonored the family, he said, has threatened to take away her beloved 4-year-old daughter.

&ldquo;Haveen and her daughter are at the center of my life,&rdquo; Johnson said.

Johnson&rsquo;s convictions included failure to obey orders and conduct unbecoming an officer and a gentleman. He pleaded guilty to 15 counts, two of which were later dismissed. He contested two counts of conduct unbecoming, but was convicted at trial.

The charges were all connected to his relationship with the Al-Atar family, whom he&rsquo;d met on an Iraq deployment in 2005. The family fled to the Netherlands as refugees in 2007. Johnson filed false travel vouchers when he visited the family, beginning in 2008, and improperly used government vehicles.

When he deployed to Afghanistan in 2009, he gave the family a government cellphone that racked up $80,000 in charges. He also steered money to Haveen&rsquo;s father, Alladin Al-Atar, by hiring the former math teacher who had fought against Saddam Hussein and worked with the Americans, as his cultural adviser for Afghanistan. In addition, he attempted to get a contract to bring water-producing windmills made by a Dutch company to Afghanistan which, if approved, would have netted Al-Atar, who worked for the company, more than $500,000, prosecutors said.

Prosecutors told the jury that Johnson had abused his command to aid Al-Atar and find favor with his daughter, with whom he committed adultery, then wrongful cohabitation, then bigamy.

But Johnson told the panel on Thursday that for the contracts with Al-Atar, his motives were pure; he wasn&rsquo;t merely funneling money to Al-Atar. Although the two conferred by telephone and Al-Atar spoke none of the languages of Afghanistan and had never been there, &ldquo;I honestly believed the advice provided by Mr. Al-Atar were part of our success in Afghanistan,&rdquo; Johnson said. &ldquo;What I know in my heart is Mr. Al-Atar was contributing more than other advisers.&rdquo;

The water-producing windmills, Johnson said, had they worked, would have saved resources and lives by reducing water deliveries to combat outposts.

&ldquo;It was a good idea,&rdquo; Johnson said, and others agreed until they learned it wouldn&rsquo;t work.

Johnson began his statement, which was not under oath, by taking full responsibility.

&ldquo;I deeply regret having disgraced my family, disgraced my unit, disgraced my profession and disgraced my friends,&rdquo; he said. &ldquo;I failed the soldiers I commanded and the officers I served with for 26 years. I&rsquo;ve lost my son and daughter.&ldquo;

Lt. Col. Charles Kuhfahl, Johnson&rsquo;s defense lawyer, asked how the colonel, an honor graduate of the U.S. Military Academy at West Point, who was always rated best and brightest among his peers and who shone in four combat deployments, could explain all that had happened.

He said his relationship with the Al-Atar family had been above-board at first, but his feelings deepened as time passed.

&ldquo;I found somebody that was a companion, a friend; we respected each other,&rdquo; he said of Haveen Al-Atar.&rdquo;I started rationalizing decisions I was making that pertained to (her father).&rdquo;

Later, after he was fired, sent to a basement office at U.S. Army Europe headquarters in Heidelberg, told not to speak to colleagues and had earned the enmity of his children, he said, &ldquo;I found I had nothing more than Haveen and her daughter to rely upon.&rdquo;

Johnson said the woman and her daughter had moved into his base quarters because they&rsquo;d had nowhere else to go, and that officials had then taken away the base access card he&rsquo;d gotten for her and banned her from all USAREUR bases. &ldquo;They&rsquo;ve tried to strip her away from me,&rdquo; he said.

He married her, although he was not yet divorced, he said, because she was in a perilous immigration status.

Kris Johnson, whose divorce from the colonel is not yet final, and who turned him in in an email to investigators last year, sat in the courtroom with the couple&rsquo;s two teen-age children.

&ldquo;You&rsquo;re a pathetic human being,&rdquo; she told him during a break.

After the sentence was announced, Kris Johnson said it was insufficient and that she had wanted her estranged husband in jail. She was relieved, she said, that he was not sentenced to forfeiture and she would get to keep half of his retirement benefits, when their legal and financial affairs are settled. &ldquo;If he ever signs my divorce agreement,&rdquo; she said. &ldquo;He could drag the divorce out for another five years and live in a bigamous marriage.&rdquo;

He&rsquo;d tried to pay back the money and tried three times to resign in lieu of court-martial, he said.

The panel seemed persuaded by his statement and the closing arguments of his lawyer.

Prosecutor Lt. Col. Will Helixon in his closing argument had asked the panel to sentence Johnson to dismissal and confinement for a period of &ldquo;years, not months.&rdquo;

He said Johnson still was minimizing what he&rsquo;d done, characterizing his actions as cutting corners, errors in judgment, blurring the lines.

Kuhfahl said the appropriate sentence would be a fine, paying back the money misappropriated, or doubling it. Although in murders or arsons, for instance, there&rsquo;s no undoing the damage, he said, &ldquo;in this case, you can unring the bell.&rdquo;

Kuhfahl pleaded with the panel not to impose confinement.

&ldquo;Don&rsquo;t destroy his life,&rdquo; Kuhfahl said. &ldquo;Give him the opportunity to pick up the shattered pieces of his life and try to move on.&rdquo;