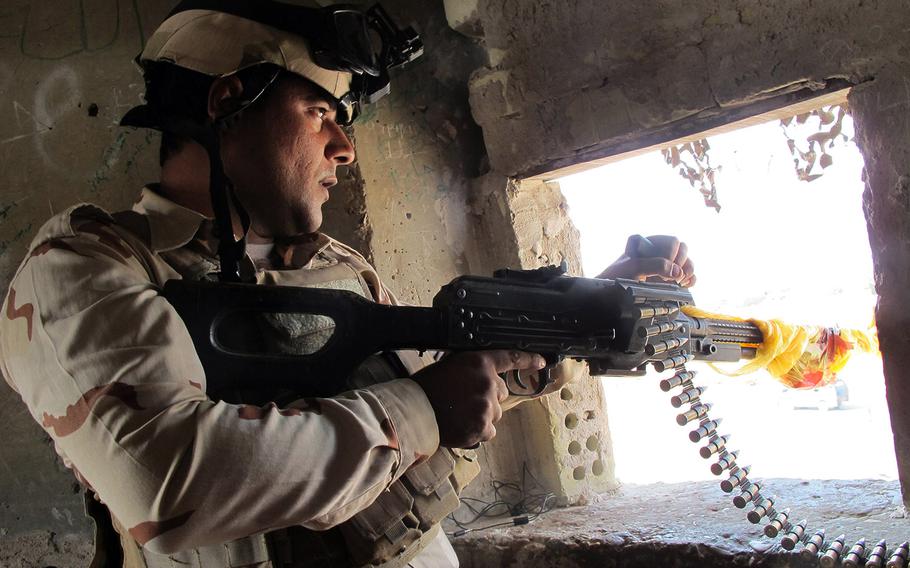 In this Nov. 2014 file photo, Iraqi Army Sgt. Ahmed Hassan stands sentinel in an guard tower in Abu Ghraib, where the army and allied Shiite militiamen were struggling to hold the town and nearby Baghdad International Airport. (David Zucchino, Los Angeles Times/TNS)

WASHINGTON — The formal mission to train Iraqi troops to take on Islamic State militants is underway, according to the Pentagon.

In addition, Marines from a Special Purpose Marine Air-Ground Task Force are training soldiers from the Iraqi army’s 7th Division at Al Asad Air Base in Anbar province, Warren said. There are about 320 American troops at Al Asad training Iraqi security forces and performing other advise-and-assist missions. The formal training mission at Al Asad began Dec. 20. Warren did not give a time line for when that process will be completed.

The U.S. plans to conduct training at two other sites — in Irbil and Besmaya — but it will be weeks before those are up and running, according to Warren.

Warren said that all Iraqi troops in training have been vetted to make sure they don’t have ties to the Islamic State or other terrorist groups.

Training Iraqi forces to fight the Islamic State on the ground is the linchpin of the Obama administration’s strategy to defeat the militants, who have taken over large chunks of Iraq and Syria. President Barack Obama has ruled out sending U.S. ground forces into combat in Iraq, leaving the burden of dislodging the terrorist organization to local forces.

The U.S. and its allies plan on training 12 ISF and peshmerga brigades. The training mission will be a long one, according to officials. Lt. Gen. James Terry, the commander of Combined Joint Task Force-Operation Inherent Resolve, said last month that it will take “a minimum of three years” before the ISF and Kurdish peshmerga are capable of defeating the Islamic State group.

There are approximately 2,140 American troops in Iraq, 800 of which are engaged in providing security and force protection, and the remainder are training, advising and assisting the ISF and peshmerga. Obama has authorized the deployment of an additional 1,000.

Although American ground forces are not engaged in combat with the Islamic State, they are not completely out of harm’s way. Warren said that the Al Asad base is coming under “regular” indirect fire, but there have been no U.S. casualties as a result.

“The fire has been completely ineffective,” Warren said, describing them as “purely nuisance attacks.”

“The Iraqi security forces there have done a very good job of creating a security zone,” Warren told reporters.

He said he is not aware of any American troops returning fire, but U.S. forces maintain the right of self defense.