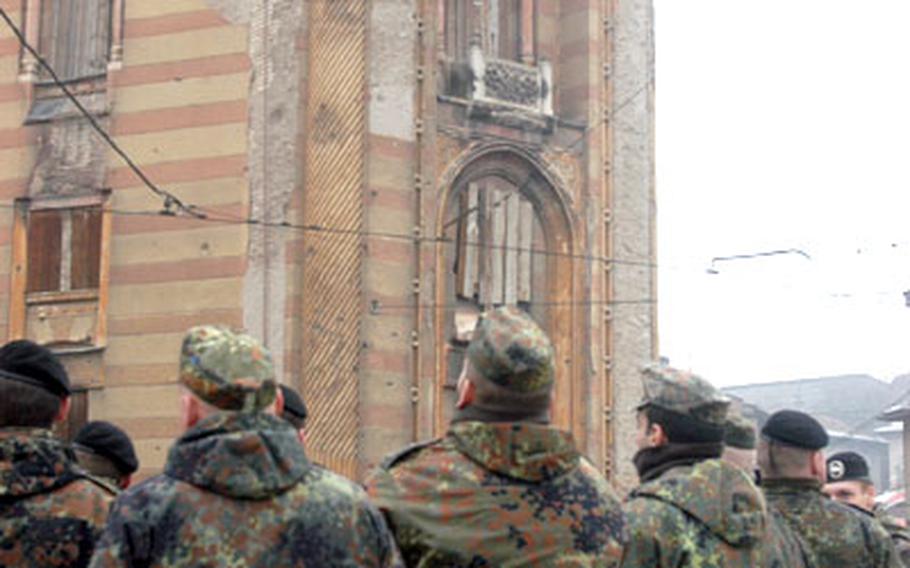 German soldiers touring Sarajevo take in the view of the National Library. An effort is currently under way to renovate the landmark, which was damaged in the war. (Kevin Dougherty / S&S)

(Second in a three-part series)

They were easy to spot, and soon a ripple of admirers streamed forward to greet them. Smiles and handshakes were the order of the day.

In Bosnia these days, U.S. troops are rather scarce, so any sighting is liable to cause a stir, even at a fundraiser for Pakistan earthquake relief.

When the U.S. and its allies entered Bosnia and Herzegovina a decade ago, their presence certainly didn&#8217;t go unnoticed, either. In the dead of winter, 60,000 troops under NATO command, including 20,000 from the U.S., stepped into the Balkan tinderbox to end Europe&#8217;s bloodiest conflict since World War II. So far, the peace has held, though it will probably take many more years for animosities to dissipate.

A decade later, the peacekeeping mission continues, though under new management and with far fewer foreign forces. And, quite possibly, with a discernible light at the end of the proverbial tunnel.

If the October 2006 national elections in Bosnia are successful and the last of the major war criminals is caught, the number of foreign forces could drop further, said British army Lt. Col. Tim Smith, a military spokesman in Sarajevo. Currently, the international force in Bosnia is roughly 7,000.

In December 2004, a European Union-led stabilization force took over the Bosnian peacekeeping mission from NATO. EUFOR and its 6,500-strong contingent work with Bosnian security forces to maintain a safe and stable environment and to assist them in deterring and disrupting organized crime.

As under NATO, most peacekeepers are divided into one of three multinational regional task forces based either in Banja Luka, Tuzla or Mostar. There is also a headquarters unit in Sarajevo and the Integrated Police Unit, which supports local Bosnian police agencies.

While the European Union has taken over peacekeeping duties, NATO is still present. The alliance left behind a small force to help the Bosnian government with defense reform, counterterrorism and war criminals.

A U.S. detachment, largely made up of National Guard troops, is part of the NATO force led by Army Brig. Gen. Louis W. Weber, the senior U.S. military representative and commander of NATO headquarters in Sarajevo. There are between 200 and 300 U.S. servicemembers currently in Bosnia. Most are assigned to Eagle Base in Tuzla, with the balance at Camp Butmir in Sarajevo.

As recently as Dec. 1, 2004, the U.S. had more than 1,000 troops in Bosnia. But the success of the mission, coupled with manpower needs in Afghanistan and Iraq, made a reduction in force all the more prudent.

Today, one of the main units in Bosnia is an Army helicopter detachment from the 238th Aviation Battalion, Michigan National Guard. It provides airlift support to U.S. personnel and participates in the hunt for war criminals.

But for the helicopter crews and other soldiers, camp life at Eagle Base, which EUFOR also uses, is a far cry from what it was just a few years ago. There are still facilities &#8212; a gym, post exchange, cafe and fast-food restaurant &#8212; but the vibrancy of the place is gone.

At times, Price has had to sit down with younger soldiers to reinforce to them that their time in Bosnia is not in vain. Some, he said, seem to be chomping at the bit to go to Iraq or Afghanistan.

Experts and average Bosnians weigh in on the future of the Baltic nation.