John Russell is a new comic hero created by a team of veterans and Hollywood heavyweights for the graphic novel "Vindicated Inc." (Courtesy of Kissell Studios)

John Russell is a new comic hero created by a team of veterans and Hollywood heavyweights for the graphic novel "Vindicated Inc." (Courtesy of Kissell Studios) 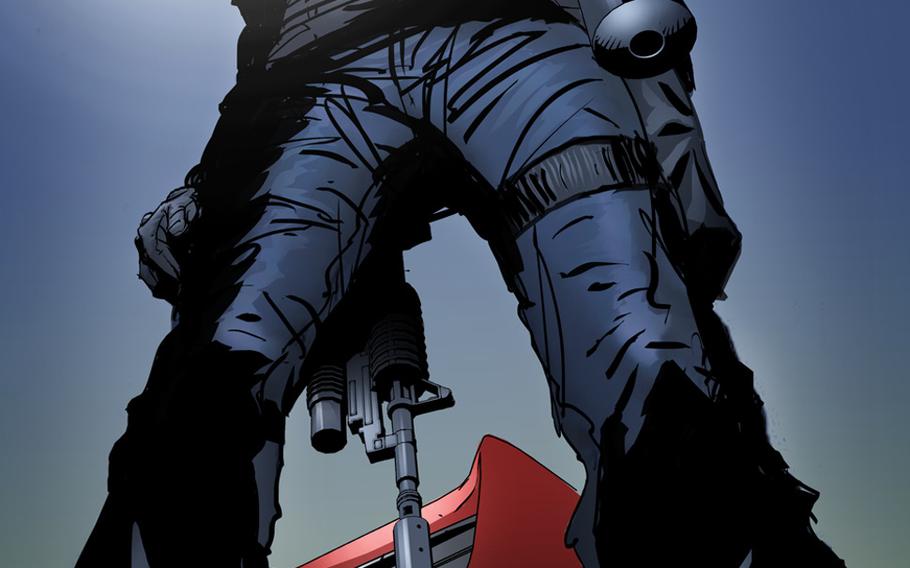 "Vindicated Inc." is slated for release next year. (Courtesy of Kissell Studios) 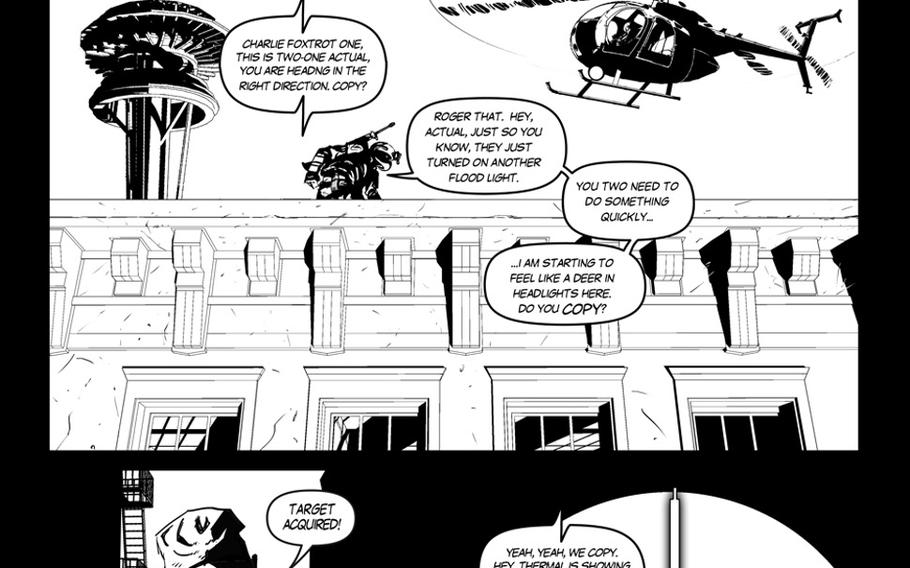 John Russell is a member of the elite Army Delta Force. He loses both legs below the knees in an IED blast in Afghanistan. (Courtesy of Kissell Studios) 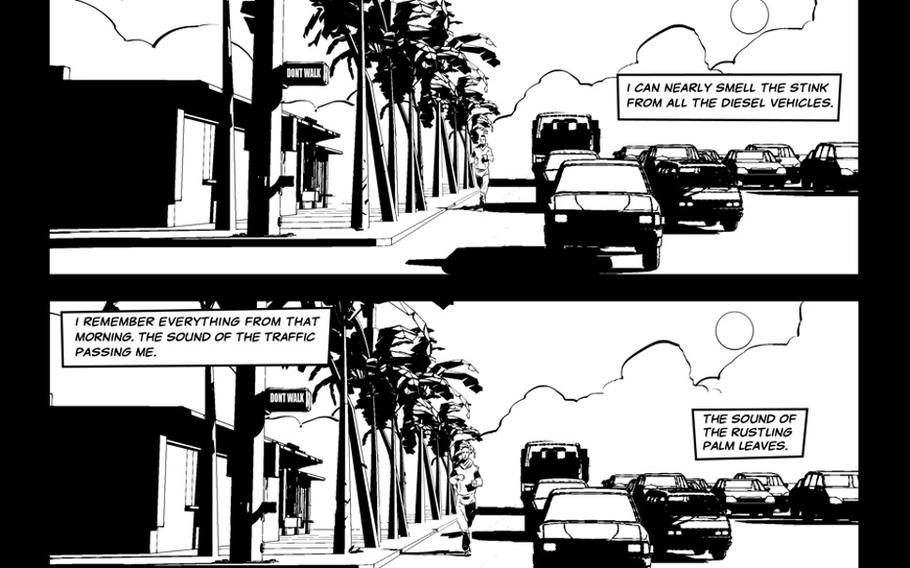 When John Russell returns home, he not only battles his wounds and the emotional trauma of combat, but he decides to take on Seattle's underworld. The comic's creators hope to honor veterans with the novel, highlight both their struggles and triumphs, and donate a portion of the proceeds to charity. (Courtesy of Kissell Studios) "Vindicated Inc." hopes to honor veterans with the novel, highlight both their struggles and triumphs, and donate a portion of the proceeds to charity. (Courtesy of Kissell Studios) Illustrator Gerry Kissell, center, draws a frame from the soon-to-be-released graphic novel Vindicated Inc. in October at his Springfield, Mo. studios. Kissell is surrounded by his daughter Zoe, right, and co-writer Robert Scott McCall, left, who helped develop the characters and story. (Courtesy of Kissell Studios)

America’s next comic book hero could be a member of the elite Delta Force who lost his legs in an IED explosion in Afghanistan.

Created by a group of military veterans, the comic character John Russell goes by the name Vindicated and is Seattle’s ardent protector, striving to rid the city of organized crime while clad in body armor and a ballistic helmet and mask. He has no superpowers like Superman or fancy gadgets like Batman. Instead, he has to overcome daunting physical wounds and post-traumatic stress with only his elite training and the will of a soldier to help him overcome.

The graphic novel “Vindicated Inc.” — tentatively scheduled for May release — is creator and illustrator Gerry Kissell’s “love song” for all soldiers who left a piece of themselves on the battlefield. A portion of the proceeds from the comic will go to ACVOW, a nonprofit that helps servicemembers adjust to life after combat through peer-to-peer relationships and other programs.

“Vindicated is not a superhero,” Kissell said last month from his Springfield, Mo., studios, where he was busy at work on the project. “He is just a man. His strengths are that of a well-trained elite forces soldier with prosthetic legs.”

Kissell is a former Army medic and freelance artist, known for his loose comic style with a focus on realism. He is perhaps best known for his graphic novels “Iron Sky” and “Code Word: Geronimo” on the raid that killed Osama Bin Laden. Both were distributed by top-tier graphic novel publisher Idea and Design Works, for whom Kissell has worked steadily since 2010.

The 49-year-old got the idea for Vindicated Inc. while pondering the many accomplishments of the wounded veterans of Iraq and Afghanistan and how they had transformed the word disabled to enabled.

“We have Olympic athletes and folks climbing mountains with prosthetic limbs,” Kissell said. “It is amazing… It is my dream to tell a story about a disabled vet and put to task people’s ideas of what disabled even means.”

Kissell also decided that PTSD had to play a prominent role. Many of his friends and collaborators are veterans who have struggled with combat trauma.

“PTSD plays a huge part in the story,” Kissell said. “I feel sometimes like it’s almost a character.

“It is why [Russell] initially puts on the armor and goes out to take on criminals. But, as he learns to deal with his PTSD, he also learns that what he is doing affects the people in the city around him. So, we see him embrace his PTSD and learn to use it productively, rather than it controlling him.”

Kissell enlisted friends and fellow veterans Ernesto Haibi, who suffers from post-traumatic stress, and Robert Scott McCall to help flesh out the idea. Then he brought in author Shane Moore to write the script. They have been working on the project for 10 months, Moore said.

Moore, 37, is a former police officer and Navy veteran from Carlinville, Ill., with 14 novels under his belt, including “The Apocalypse of Enoch,” an end-of-days thriller. It became New Babel Books’ top best-seller after its June 2012 release. Moore also suffers from post-traumatic stress after being stabbed in the line of duty in 2004, one of two attempts on his life while in a police uniform.

“I see [Vindicated Inc.] as a cross between [the television shows] ‘The Shield,’ ‘Sons of Anarchy,’ and [the comic book] ‘The Punisher,’ all rolled into one pissed-off veteran who has had enough,” Moore said. “John Russell is like every one of us. He has struggled to do right for himself, and the bureaucracy of modern programs just perpetuate his dependency.”

“I want to write it in such a way that his own humanity is as much a hurdle as the real villains are. He has to begin to lose his humanity to succeed — yet in doing so he is really losing.”

Kissell brought in Dale and Julia Dye as advisers on military accuracy and actor and amputee Kurt Yaeger, who played Greg the Peg on “Sons of Anarchy,” to serve as a consultant, character in the comic and hopefully Vindicated himself if the comic makes the silver screen one day.

Dale Dye took part in 31 major combat operations in Vietnam as a Marine and was awarded the Bronze Star and three Purple Hearts, according to his website. He has been in a number of influential war films and television shows in the past three decades, from “Platoon” to “Saving Private Ryan” and “Band of Brothers.”

Next, the group launched a funding campaign on Kickstarter because Kissell wanted the freedom to publish whatever he wanted and to own the rights, he said. Over six weeks, they surpassed their $8,000 goal by getting $10,000 in commitments. They haven’t decided whether to self-publish or go with an established publisher like IDW.

“I will co-write and illustrate a lot of stories before I die, but I suspect Vindicated is going to be my opus,” Kissell said. “It is the culmination of years wanting to do something for vets.”

The comic is not for children and has plenty of sex, drugs and violence as Russell makes enemies on both sides of the law, according to a sample of Moore’s script.

At the start of the debut, we find Vindicated torturing a motorcycle gang member for information on a human trafficking ring. The hero uses a blow torch to heat up his combat knife, then jams it in the man’s ear. After he gets what he wants, he slices the man’s femoral artery as police quickly close in.

“He’s a scum bag, but I still feel like [expletive] for doing it,” Vindicated says. “This is all his gang understands, and if I am going to win this war, I have to meet the enemy and be willing to do worse than him.”

“Someone asked if I am glorifying combat,” Kissell said. “I told them that if they see glory in the gore brought by combat, then there is something wrong with them. One doesn’t go about making an anti-war story. Every good soldier is against war. And a good anti-war story is just a war story told realistically, because war, all by itself, is horrific.”

“With that said, I do believe in personal valor and heroism, and have no problem with us depicting that. Because Vindicated, though fictional, represents the real soldiers who show valor and heroism every day in combat.”

Kissell said Vindicated Inc. is planned as a series, with story lines for the first three books already mapped out. They also have been collecting letters of intent from Hollywood actors for the film — and letters from servicemembers who approve of what they are doing.

“I got letters from disabled vets and vets with severe PTSD, and they all were so excited by what we are doing,” Kissell said. “I was emotionally overwhelmed by it … It was [an] outpouring like that, that made me know I was doing something right.”