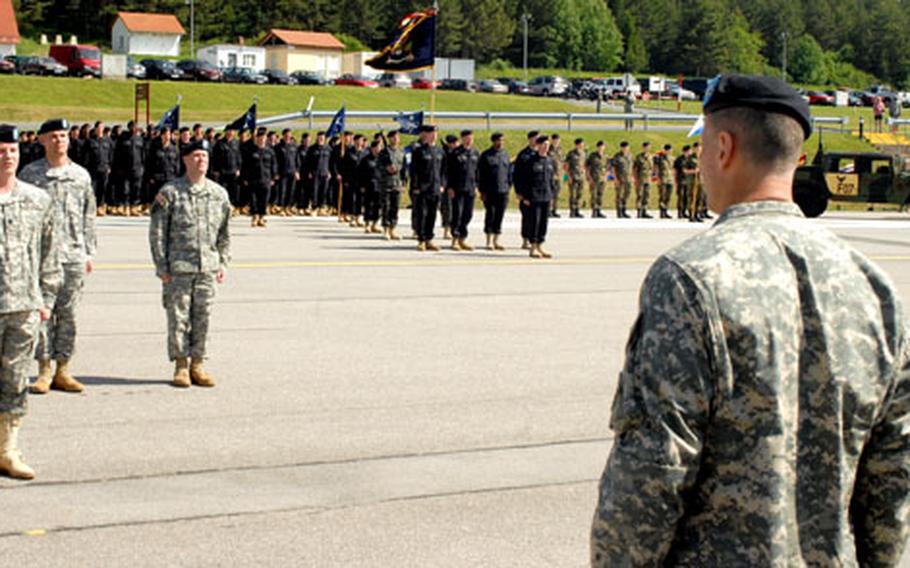 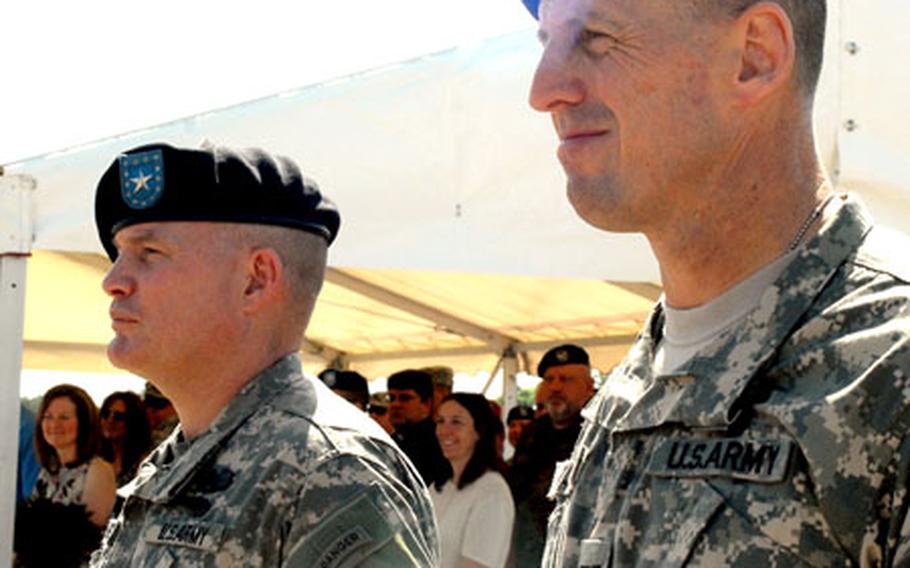 HOHENFELS, Germany &#8212; Foreign troops will soon be overseeing training at the Joint Multinational Training Center, with the creation of a multinational observer/controller team.

Col. Thomas Vandal &#8212; who relinquished command of the JMRC Operations Group on Friday &#8212; said a 27-man multinational observer/controller team will be ready for action in 2009.

"We already have eight U.S. teams, but we will establish a multi-national OC team because of all the coalition training we do. We are still working to identify which nations will participate," he said.

An OC, usually a combat veteran, acts as both referee and coach during a military training exercise, judging outcomes of simulated battles and advising soldiers on techniques, tactics and procedures to use in places like Iraq or Afghanistan.

So far Italy has committed to join the team; there are tentative commitments from Germany, Spain, Britain, Romania and Bulgaria; and several other nations have shown strong interest, Vandal said.

Officers and noncommissioned officers from those nations will be assigned to Hohenfels once they join the team, he said.

During a ceremony to bid farewell to Vandal at Hohenfels on Friday, Joint Multinational Training Command chief Brig. Gen. David Hogg cited the progress that has been made at JMRC in recent years with the creation of many new training facilities and programs.

Multinational training has been greatly increased since Vandal took command in July 2005. The training center changed its name from Combat Maneuver Training Center to JMRC that year to reflect the emphasis on multinational and joint training, he said.

About 75 percent of the training at JMRC still involves U.S. forces but the center is integrating foreign troops into U.S. training to give personnel experience working with coalition partners, he said.

"In Iraq and Afghanistan we are working together with coalition partners. Two to three coalition companies are integrated into each (U.S. combat brigade pre-deployment training) rotation," he said.

NATO personnel also come to JMRC to do explosives training, he said.

JMRC leaders expect more foreign troops to train at Hohenfels in the future. A factor in that will be former U.S. Army Europe commander Gen. David McKiernan&#8217;s move to head the International Security Assistance Force in Afghanistan.

"We will see more NATO training as these units, particularly OMLT (Operational Mentor and Liaison Team) teams, prepare to go into Afghanistan to help train the Afghan National Army and Afghan National Police," he said.

JMRC used to host one OMLT training rotation each quarter but now hosts about six each year, Vandal said.

Along with the increase in multinational training JMRC will increase its joint training, he said.

For example, this summer Marines will be integrated into a pre-deployment exercise of the 172nd Infantry Brigade Combat Team, said Vandal, whose next assignment is as assistant to the 3rd Infantry Division commander at Fort Stewart, Ga.