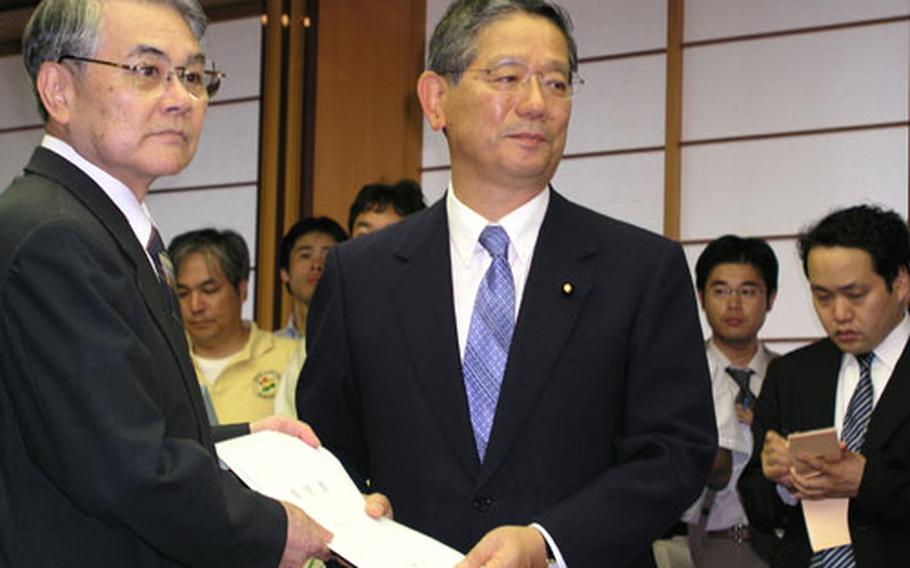 Japanese Foreign Minister Nobutaka Machimura, center, visited Okinawa on Saturday for the first time since he assumed office last month. He told Okinawan leaders — including Gov. Keiichi Inamine, left — that the Japanese government is pressing the United States to reduce its forces on Okinawa through realignment. (Chiyomi Sumida / S&S)

He also said that the government would seek a way to shorten construction periods for a new airport planned offshore near Camp Schwab, which will be a relocation of operations at Futenma Marine Corps Air Station.

&#8220;Under the present plan, it would take nine to 10 years after the actual construction starts&#8221; to complete the work, he said during a press conference before wrapping up his first visit to Okinawa since he assumed the post last month.

During his two-day tour to Japan&#8217;s southernmost island prefecture, where 75 percent of U.S. military facilities and installations in Japan are located, he met separately with Gov. Keiichi Inamine, prefectural assembly members and mayors of local communities that host military bases on the island.

Prior to the meetings with local leaders, Machimura visited Okinawa International University, where a Marine Corps CH-53D helicopter crashed Aug. 13. The Sea Stallion&#8217;s rotors crashed on the campus and caught fire, damaging a university administration building. Three crewmembers were injured but there were no casualties to civilians on the ground.

During a talk with Inamine, Machimura said that he would try his best to reduce the burden of the U.S. military on Okinawa.

&#8220;Prime Minister [Junichiro] Koizumi told me that a good relationship with the United States is of the utmost importance to Japan,&#8221; he said. Koizumi gave him instructions to make his best effort to work on realignment of U.S. forces in Japan, he said.

&#8220;While maintaining the effect of the bilateral security arrangement in peacekeeping in the regions, he told me to reduce the burden of Okinawa at the same time,&#8221; he said.

Earlier this month, the Washington Post reported that Machimura met with his U.S. counterpart, Secretary of State Colin Powell, to discuss the reconfiguration of the U.S. military in Japan. During the talk in Washington, he pressed the United States to reduce its military presence on Okinawa. Machimura urged the United States, however, to leave adequate forces in Japan to promote security in the region.

Machimura told Inamine that seeing charred trees and the wall at the university where the Marine Corps helicopter crashed made him realize how serious the incident was.

The best preventive measure, he said, is to close the air station, which sits in the midst of a heavily populated area.

&#8220;The fundamental solution is to move the air station operations elsewhere,&#8221; he said.

Inamine said that expectations are becoming high among the people of Okinawa for reducing military presence on the island as realignment discussions between the governments progress. He said he wanted a visible reduction.

Inamine presented Machimura with a written petition that includes protests against the resumption of CH-53D helicopter flights and against an ongoing project on Camp Hansen for the U.S. Army urban combat training complex.

&#8220;To maintain the security alliance and to reduce the burden of Okinawa seemingly do not go together,&#8221; Machimura told reporters during a press conference at the foreign ministry&#8217;s Okinawa Liaison Office.