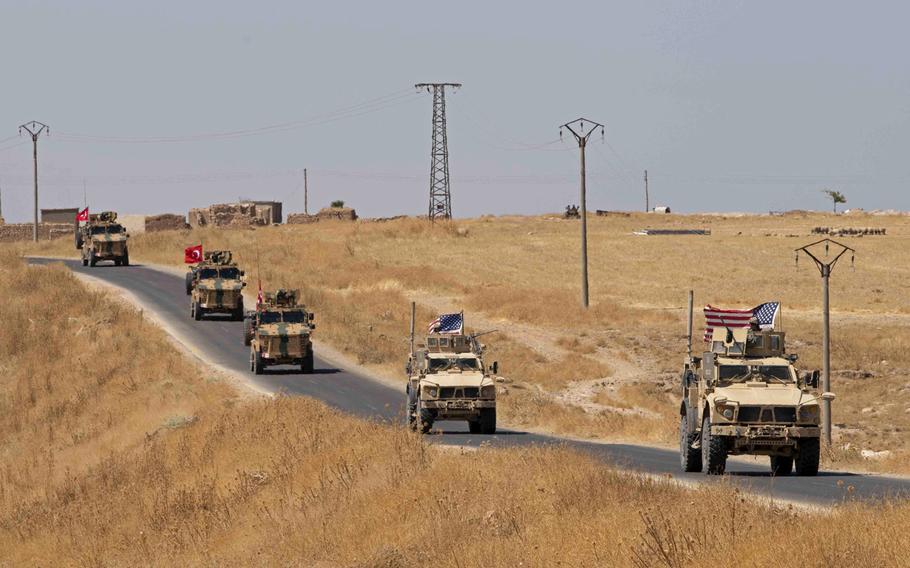 STUTTGART, Germany — Turkey remains a transit point for foreign fighters looking to join the Islamic State in Iraq and Syria, which could help the terrorist group to reorganize and regain influence, a U.S. report on global terrorism says.

The annual U.S. State Department country reports on terrorism released Friday trumpeted how “the United States and its partners made major strides to defeat and degrade international terrorist organizations in 2018,” including liberating nearly all the territory previously held by ISIS in Syria and Iraq.

But the section on Turkey warned that country could serve as a corridor for militants looking to replenish the radical group’s ranks and allow ISIS to regenerate.

“Turkey is a source and transit country for FTFs (foreign terrorist fighters) seeking to join ISIS and other terrorist groups fighting in Syria and Iraq,” the report stated.

The U.S. has emphasized to Turkey the importance of ensuring its borders are secure, the State Department’s counterterrorism coordinator Nathan A. Sales told reporters Friday.

“We don’t want other fighters flooding into Syria to provide a shot in the arm to an ISIS that is seeking to reconstitute itself,” Sales said.

Turkey also “will sometimes deport suspected foreign terrorist fighters without providing advance notice to the destination countries,” the report said, without going into detail about how often suspects are expelled.

On Monday, Turkish officials issued a new warning, saying ISIS prisoners would be sent to their home countries in Europe even if their citizenship has been revoked.

While Turkey is a member of the U.S. coalition against ISIS and of NATO, relations between the allies have become increasingly strained.

This summer, after Turkey purchased a Russian missile defense system, the United States canceled the sale to its longtime ally of F-35 jets, the next-generation American stealth aircraft. Relations tumbled further last month when Ankara invaded northeastern Syria and aligned with Russian forces there. Critics in the West have also blamed Turkey for turning a blind eye to foreign fighters who used Turkey as a transit zone that helped fuel ISIS’s rise in the first place.

While ISIS has suffered significant losses in recent months, including the death of its leader Abu Bakr al-Baghdadi who was killed last week in a raid by U.S. forces, the group still poses a threat.

A Pentagon Inspector General report in August estimated between 14,000 and 18,000 ISIS members were still in Iraq and Syria. In addition, there are roughly 10,000 suspected ISIS fighters being held in prison camps, many overseen by Kurdish forces that Turkey is fighting in Syria. The Kurds have warned that the fight with Turkey has diminished their ability to guard prisons in eastern Syria holding ISIS prisoners, and could lead to jailbreaks.

Concerns have also been raised that, as the U.S. continues to reduce its troop presence in Syria, Turkey could focus its efforts on targeting Kurdish militias it sees as the main enemy rather than ISIS, helping to reverse gains made in recent years against ISIS. German media on Sunday reported that Turkish forces were coordinating with various Islamic militant groups to target Kurdish elements in Syria.

Turkey on Sunday criticized the U.S. report on terrorism for not naming the Kurdish militia it’s fighting in Syria, known as the YPG, as a terrorist group. The U.S. disagrees with Turkey’s assessment that the YPG is one and the same as the Kurdistan Workers’ Party, or PKK, which both countries designate a terrorist group.

Tensions have also been strained by Turkey blaming the movement of self-exiled cleric Fethullah Gulen – who resides in the U.S. – for masterminding the attempted coup against Erdogan in July 2016. Ankara has demanded Washington hand Gulen over, but the U.S. has said no credible evidence against him has been offered.

Following the U.S. refusal to turn in Gulen, several U.S. citizens and staff at the U.S. Embassy in Turkey have been detained and arrested, the terrorism report said.

“Turkey has a broad definition of terrorism that includes crimes against constitutional order and internal and external security of the state, which the government regularly uses to criminalize the legitimate exercise of freedom of expression and assembly,” the report said.

Other key findings of the report, which since 1985 has looked at trends in the global terrorism landscape, were that Iran remained the world’s leading state sponsor of terrorism and that racially or ethnically motivated attacks were on the rise around the world.