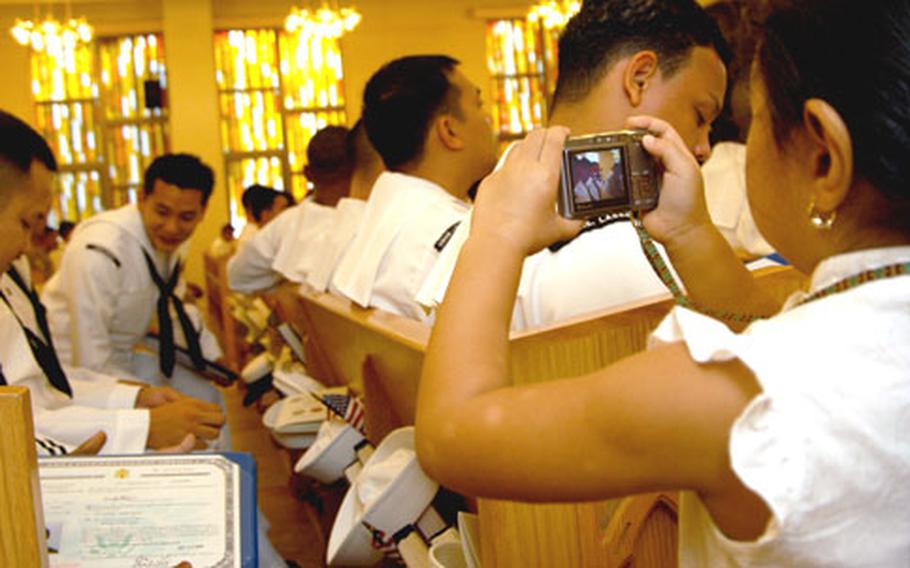 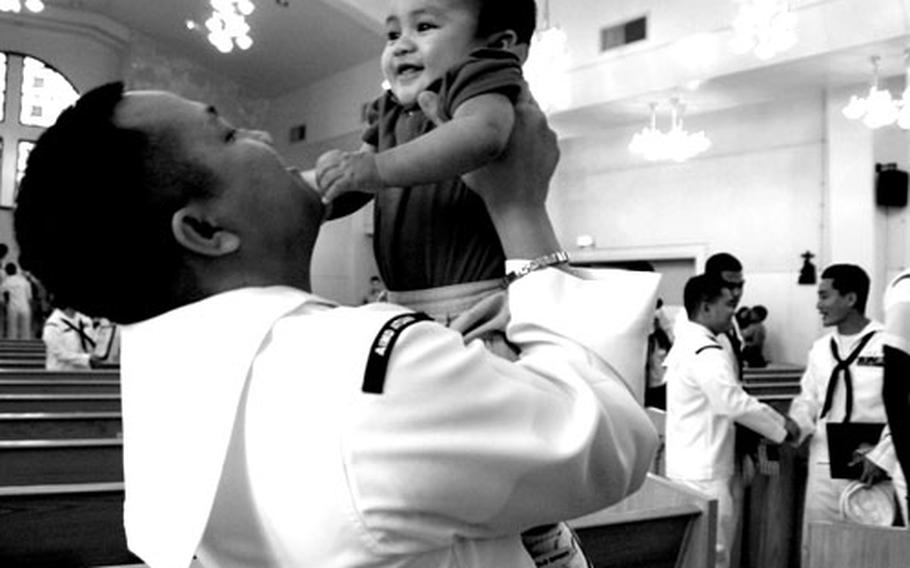 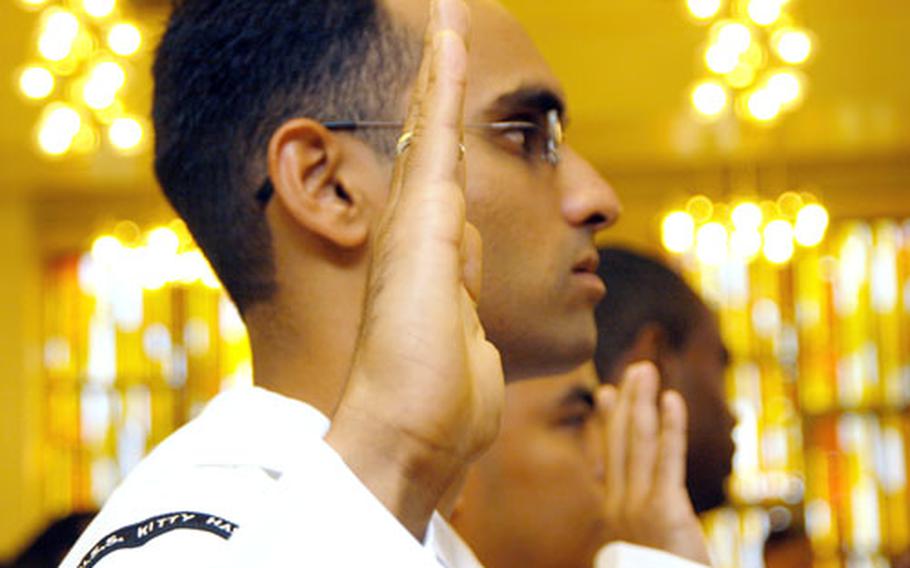 Petty Officer 2nd Class Syed Yawar Abbas, from the USS Kitty Hawk, took the oath of allegiance at a U.S. naturalization ceremony at Yokosuka Naval Base on Friday. Abbas is from Pakistan. (Allison Batdorff / S&S)

YOKOSUKA NAVAL BASE, Japan &#8212; Then Son never had a passport before &#8212; tough stuff for a guy inclined to travel.

So the native Cambodian-raised-in-Vietnam-Thailand-resident-refugee-to-the-United States joined the U.S. Navy. And on Friday, the petty officer 3rd class found his sense of place as an American citizen.

Son was one of 94 sailors and Marines from 28 countries who took the Oath of Allegiance at a naturalization ceremony at Yokosuka Naval Base.

The ceremony was one of the &#8220;largest overseas sittings&#8221; since the October 2004 legislative change that allowed naturalization to members of the Armed Forces serving abroad, said Jose Olivares, officer-in-charge attach&#233; to the U.S. Citizenship and Immigration Services.

According to the USCIS Web site, 1,006 servicemembers became citizens while overseas in 2005 at embassies, consulates and military installations.

Active-duty military get fast-tracked due to the war on terrorism. President Bush signed the Expedited Naturalization Executive Order in 2002, which allows active-duty military to file immediately for citizenship during &#8220;periods of conflict,&#8221; as opposed to the previous requirement of completing one year of honorable service.

So far, the USCIS has overseen granting citizenship to more than 20,000 troops under the expedited order. The agency estimates another 40,000 active-duty servicemembers are eligible to apply.

Seaman Kwadjo Ofosu, a native of Ghana now assigned to the USS Gary, filed for U.S. citizenship while he was in boot camp, he said.

U.S. citizenship allows Seaman Steven Marriott, also assigned to the Gary, more opportunity than he would have had in his native Jamaica, he said Friday.

But to catch up with sailors wanting U.S. citizenship, the officer-in-charge attach&#233; to the U.S. Citizenship and Immigration Services flew to the USS Kitty Hawk this summer to conduct more than 50 naturalization interviews.

The citizenship process can be difficult for U.S. sailors to complete, due in part to their deployment schedules and in part because they often don&#8217;t tell their commands they&#8217;re seeking citizenship, Olivares said Friday.

When sailors don&#8217;t tell their bosses they&#8217;re in the immigration process, finding them is difficult, he said. A further complication: Some of the required forms have expiration dates attached.

He said processing takes a combined effort of the Department of State, Homeland Security, Citizenship and Immigration Services, Immigration and Customs Enforcement and the Navy.

But once the sailor tells the command an N-400 form is pending, Olivares said, that information is passed along to the legal office, putting the sailor into the citizenship pipeline.

Servicemembers can download the forms for free online, including N-400, the application for naturalization or citizenship; the N-426, a request for certification of military service; and G-325B, biographic information. These must be completed before a sailor can be given the required interview, Olivares said.

In the Pacific, naturalization ceremonies are held almost every quarter in Okinawa and Yokosuka, he said.