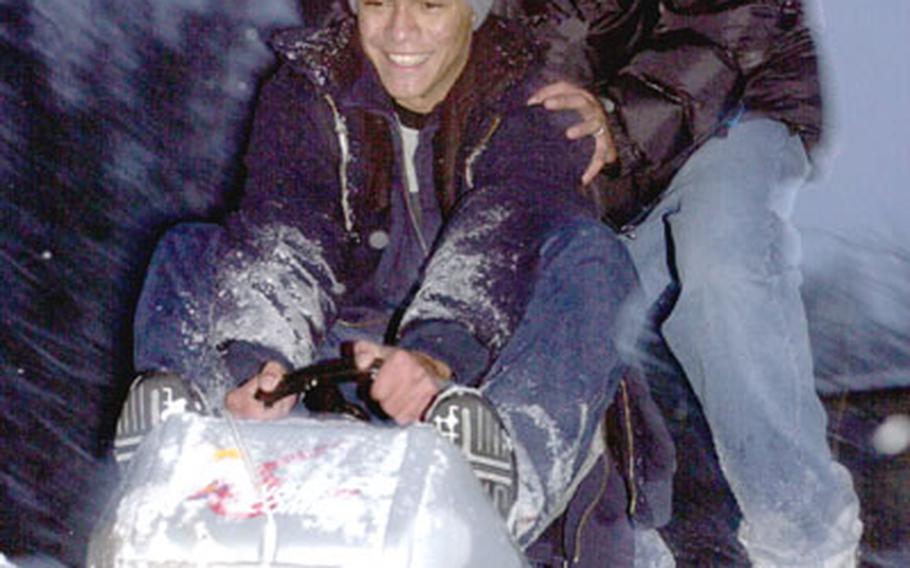 KAISERSLAUTERN, Germany &#8212; Unless you&#8217;re a skier, here&#8217;s a New Year&#8217;s prediction you may not like: Weather forecasters expect more snow for some parts of Europe this week and into the holiday.

Between 2 and 3 inches of snow fell in Belgium and blanketed parts of western and southern Germany on Wednesday. Snow flurries also reached U.S. military bases in the United Kingdom and Italy.

Wintry weather at Ramstein Air Base and throughout the Kaiserslautern military community early Wednesday snarled traffic on some roads and canceled some club meetings for the day. Also, the use of U.S. government vehicles off-base was permitted only for emergency or &#8220;mission-essential&#8221; travel.

Commanders got permission to allow some staff members to report to duty later than usual because of the conditions, Air Force spokesman Maj. Michael Blass said. Veterinarian clinics in the area postponed appointments due to the more than 2 inches of snow that fell.

If Defense Department schools weren&#8217;t on winter break throughout Europe, some students might have had the much coveted &#8220;snow day&#8221; and had classes canceled.

Dirk Maple, a service merchandise manager for the Army and Air Force Exchange Service in Baumholder, said shovels and ice melting products have been flying off the shelves the last two days. Baumholder residents are accustomed to getting plenty of snow in the winter.

And more snow is one the way.

A low pressure system lingering over central Europe will keep the snow falling in some parts this week, said Airman 1st Class Brandon Griffin, a forecaster with the 21st Operational Weather Squadron at Sembach Annex.

While the worst is over for most spots, forecasts for Grafenw&#246;hr, Hohenfels and Katterbach bases predicted as much as 4 inches of snow Wednesday night and early Thursday.

Garmisch, which is home to the U.S. military&#8217;s Edelweiss Lodge and Resort, received 3 inches of snow on Wednesday and is expected to get more snow for the weekend as low temperatures drop into the single digits.