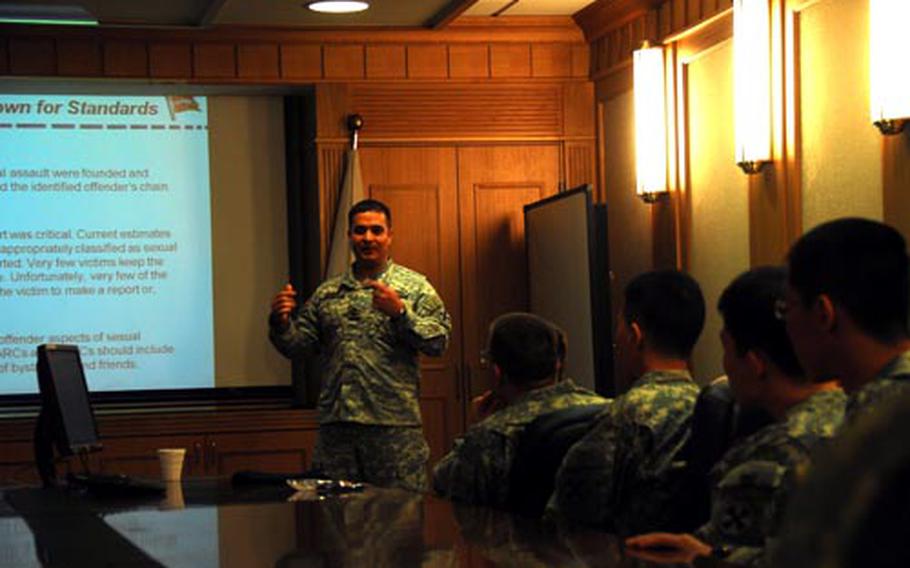 Master Sgt. Hector Andreu leads a session about sexual assault reporting and prevention during the "Stand Down for Standards" training Saturday. The training was mandatory for all U.S. Forces Korea servicemembers and was meant to reverse a rise in discipline problems that began after the weekend curfew was shortened to two hours last summer. (Ashley Rowland / S&S)

U.S. Forces Korea commander Gen. Walter Sharp announced in early April that all servicemembers were required to attend the four-hour "Stand Down for Standards" training on such topics as sexual assault, human trafficking and prostitution, and gangs in the military.

Sharp shortened the curfew in August to 3-5 a.m. on weekends and holidays, saying troops were responsible enough to behave. The previous weekend curfew was 1-5 a.m.

But after a dip in violence in the first month under the new curfew, the number of off-post incidents rose, military leaders have said.

If discipline problems don&#8217;t decrease, Sharp may change the curfew, although he has not said when he will make that decision.

Soldiers at U.S. Army Garrison-Yongsan gave the morning training high marks, despite having a special 10 p.m. curfew that the command imposed Friday night. Much of the material covered during the unit-level training paralleled that presented during in-processing, but many said it was a good refresher course. It also sparked discussions within units, particularly about sexual assaults.

"We didn&#8217;t expect to fill the whole four hours, but we did. We could have talked longer," Maj. Craig Rivet said.

A captain said a female soldier had asked him on Friday for advice on how to ensure her date wouldn&#8217;t mistake her invitation for a dinner at home as an invitation for sex, particularly on the night of an early curfew.

"That&#8217;s the most beneficial thing that we&#8217;re getting out of the training, that the soldiers have something to say," said Sgt. Major Calvin Liburo. He told soldiers not to have sex with someone for the first time if they were drunk, because one of them might not remember consenting to sex, and wake up believing they had been raped.

Liburo said soldiers hadn&#8217;t complained about the early Friday night curfew and Saturday training, but it had caught their attention.

"That alone is a statement within itself," he said. "If we can&#8217;t get this thing together from top to bottom, the curfew may go back."

Pfc. Carlos Hernandez said he thought the training was worthwhile, particularly as a session on Korean culture that encouraged soldiers to visit places outside the bars near the garrison.

"They said a lot of soldiers keep themselves to Itaewon," he said.

"It&#8217;s a good reflection," Staff Sgt. Tony Arline said of the training. "It&#8217;s stuff that you just forget, but talking about it brings it back to reality."

Capt. Robin Cushing said the stand down training was a good idea, because it gave troops a chance to fix discipline problems themselves and not be punished with a longer curfew.