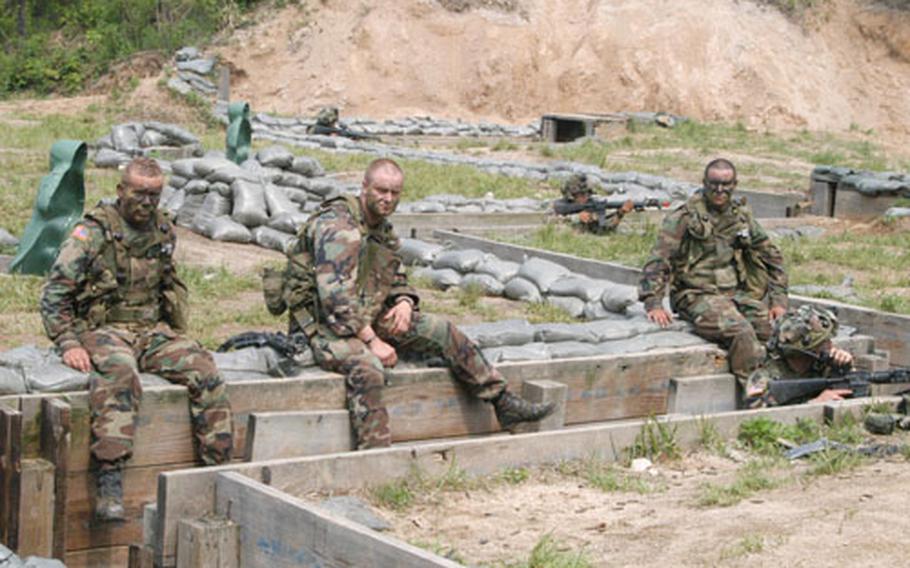 Soldiers from 1st Platoon, B Company, 2-9 Infantry Regiment "killed" in an attack by the Blue Force at Mohawk Range wait while their surviving comrades guard the trench they "died" to take during the exercise. (Seth Robson / S&S)

Soldiers from 1st Platoon, B Company, 2-9 Infantry Regiment "killed" in an attack by the Blue Force at Mohawk Range wait while their surviving comrades guard the trench they "died" to take during the exercise. (Seth Robson / S&S) 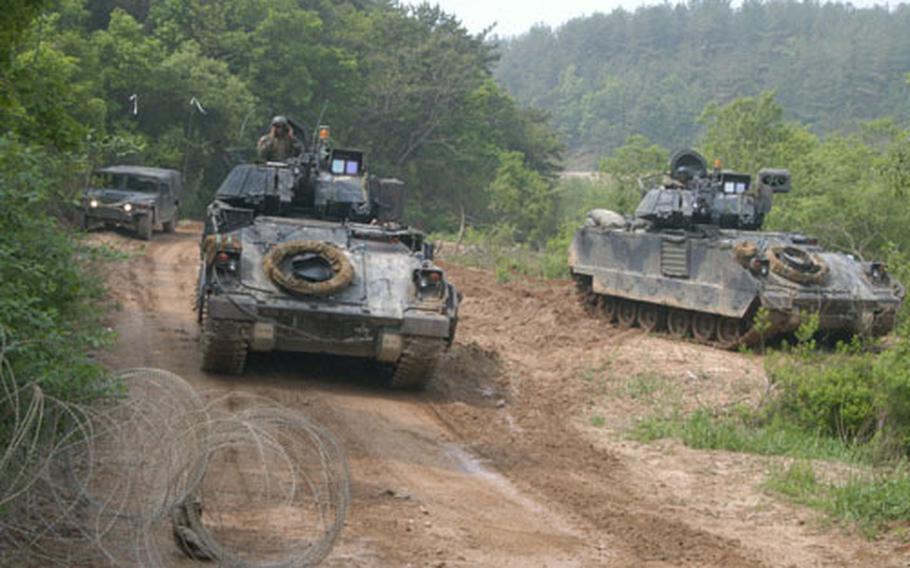 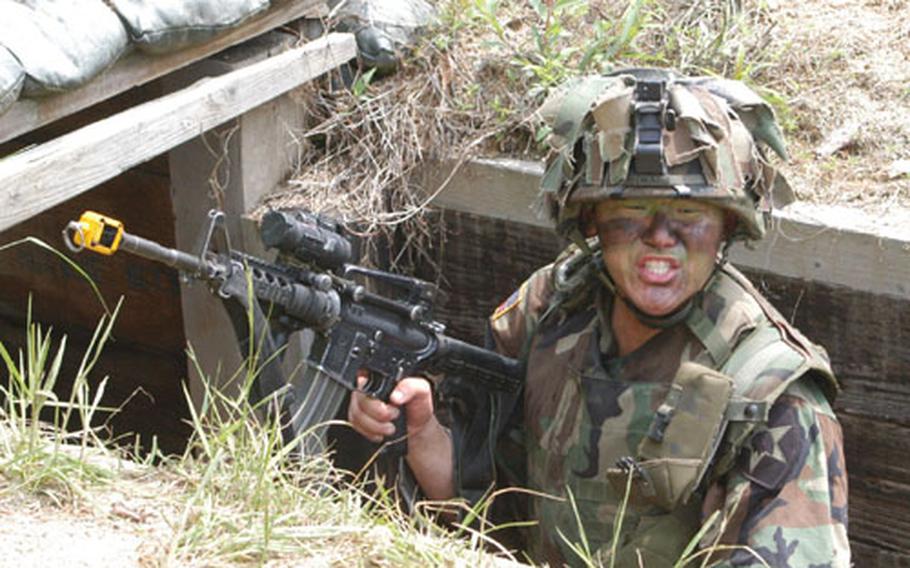 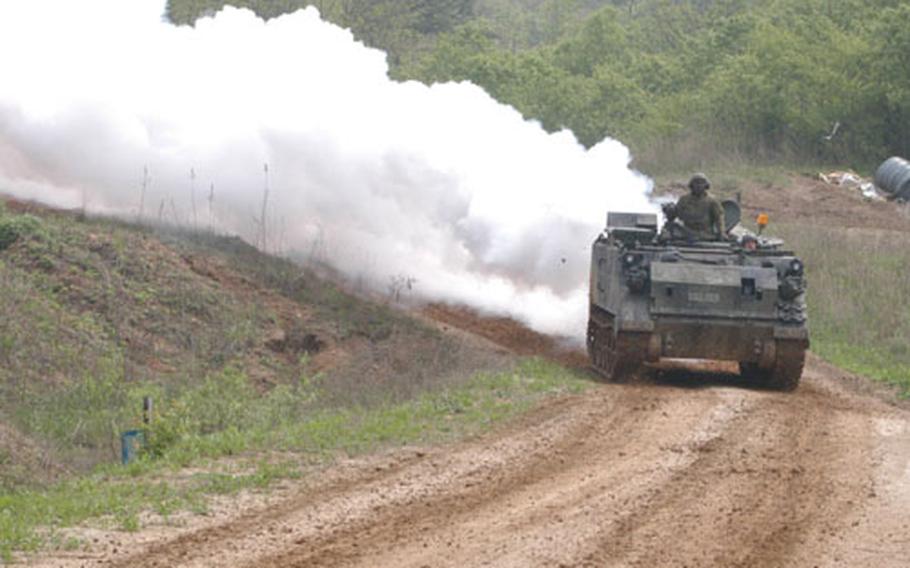 An M-113 lays down smoke to provide cover for 3rd Platoon, B Company, 2-9 Infantry Regiment during an attack in Warrior Valley. (Seth Robson / S&S) 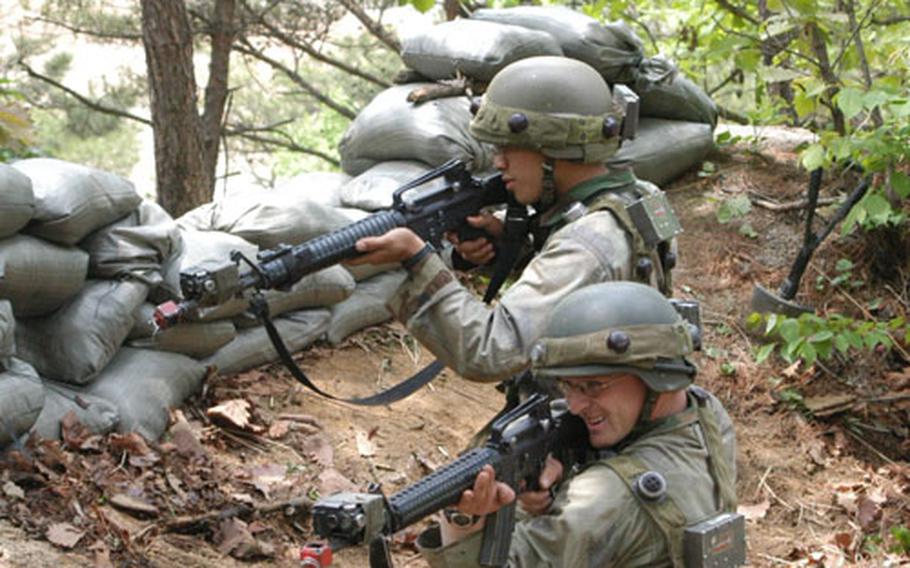 RODRIGUEZ RANGE, South Korea &#8212; Bodies lay strewn on the battlefield as stretcher bearers carried away the &#8220;wounded,&#8221; accompanied by the dreadful wailing and beeping of the soldiers&#8217; laser training gear echoing through the forest.

The fighting was part of a company-sized force-on-force exercise at Rodriguez Range designed to train platoon leaders and soldiers.

At Objective Fred, 1st Platoon defeated a pair of armored personnel carriers and a squad of enemy soldiers occupying a trench and bunker complex at the end of a steep valley. The platoon started its attack by sending dismounted infantry across the ridge line to flank the enemy and pave the way for the Bradleys.

Hwang barked out orders over a radio as Bradleys moved up to provide support fire in case the enemy attempted to counterattack.

When a counterattack came, it was limited to a pair of enemy soldiers running down a hill spraying Hwang&#8217;s trench with fire. They caught Blue Force by surprise but were &#8220;killed&#8221; before they could do any damage.

Medics took advantage of the following lull to evacuate Pfc. Daniel Garrison, lying in the trench with &#8220;serious injuries.&#8221;

Cpl. William Bradshaw and Pfc. Matthew McGowen strapped Garrison to a stretcher, lifted him out of the ditch and carried him to a waiting M-113 armored personnel carrier. However, as they made their way toward the vehicle, another pair of enemy soldiers ran out of the bush in a suicidal attack.

The pair managed to &#8220;kill&#8221; the stretcher-bearers and several other soldiers inside the M-113 before they were mowed down by a Bradley machine gun.

The attack on Wilma started with M-113s blowing smoke over the battlefield to simulate a chemical barrage and hide attacking troops.

Through the smoke, an enemy M1A1 tank lurked down a side road. It struck like a snake leaping out of its hole, &#8220;killing&#8221; one advancing Blue Force tank before it was destroyed by fire from another.

Next, an engineer squad cleared a mine field, allowing safe passage for Bradleys, which moved up to suppress Opposition Force troops dug in on a nearby hilltop.

While the tanks and Bradleys moved along the valley floor, infantry stuck to the high ground, taking key hilltops one by one as the force moved toward Objective Barney further up Warrior Valley.

&#8220;We went on a right flank up the hill. The support laid down fire on the bunker. They saw us and tried to fire at us. I took cover and got close enough to assault through and got a close kill,&#8221; he said.

Soldiers had to work hard to complete their missions, he said.

&#8220;Physically you just have to keep pushing and pushing. You are mentally tired and just want to get it over with,&#8221; Manilla said.

The young soldier said he&#8217;s used to walking up hills back home in Morgantown, W.Va., and occasionally runs up hills during physical training. However, he said, the hills in Warrior Valley are bigger than the ones back home &#8212; where he also doesn&#8217;t have to carry heavy equipment.

Another soldier storming the hills, Pvt. Greg Romaro, also of 3rd Platoon, was just as tired.

An exercise observer and controller, Staff Sgt. David Copeland, a squad leader with 2-9&#8217;s, Company D, 3rd Platoon, said a lot of the soldiers were on the edge of exhaustion by the end of the exercise.

&#8220;The guys were doing their best to keep up with the mission because of the pace of it. Getting over those humps takes a lot of physical effort to know what you need to do to get over the next one,&#8221; he said.

With most of the Opposition Force defeated and men from 2nd Platoon closing in on Objective Barney, where a simulated mine-clearing line charge was about to be used, Whipple sat in his Bradley reflecting on the mission.

The force-on-force exercise will be done by all four 2-9 Bradley companies. The companies then will repeat the exercise next week using live fire, said Capt. Anthony Kinney, 2-9&#8217;s adjutant.