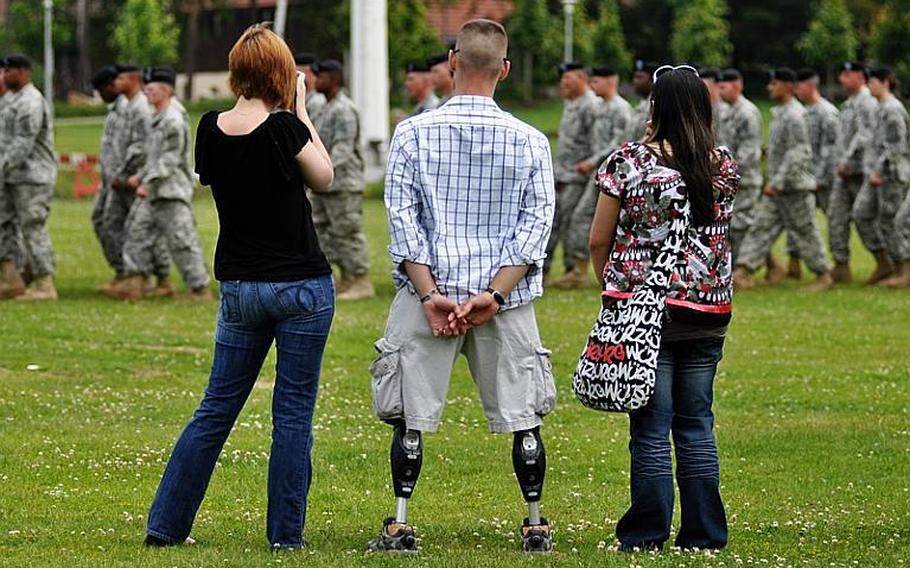 Brian Schar, a retired Army staff sergeant; his wife, Michelle; and a friend watch the 172nd Infantry Brigade march off the parade field at the Army garrison in Grafenwoehr, Germany, after a redeployment ceremony in June, 2011. (Warren Peace/Stars and Stripes file photo)

STUTTGART, Germany &mdash; When President Barack Obama and Defense Secretary Leon Panetta unveiled a military strategy Thursday that foresees shifting security challenges to the Asia-Pacific region, both men avoided the word &ldquo;cuts&rdquo; when it came to what the changes will mean for the U.S. role in Europe.

&ldquo;The U.S. military&rsquo;s force posture in Europe will, of necessity, continue to adapt and evolve to meet new challenges and opportunities, particularly in light of the security needs of the continent relative to the emerging strategic priorities that we face elsewhere,&rdquo; Panetta said in introducing the defense strategic review at a news conference.

However, when asked specifically if that meant cuts, Panetta said only that the U.S. would maintain its commitments to Europe and develop an &ldquo;innovative presence.&rdquo;

Whether any cuts will extend beyond a previously announced plan to return one of the four Europe-based brigades to the U.S. is the question.

While Panetta avoided quantifying the size of pending force reductions, the defense secretary&rsquo;s counterpart from Britain on Thursday offered a possible glimpse at the Pentagon&rsquo;s European plan.

&ldquo;My understanding is that there will remain two brigades (in Europe),&rdquo; British Defense chief Philip Hammond said in an interview with Bloomberg on Thursday after meeting with Panetta.

Such a move would mark a return to an earlier transformation plan advocated during the tenure of Defense Secretary Donald Rumsfeld, which targeted brigades in Baumholder and Schweinfurt for return to the United States. That would leave one brigade in Germany and one in Italy.

At Thursday&rsquo;s news conference, Panetta declined to elaborate on numbers involved in creating a &ldquo;smaller and leaner&rdquo; force, saying those numbers would be part of the budget the president will present, but both he and Obama emphasized the importance of European partnerships and the NATO alliance.

While the details of the plan remain unclear, Lisa Aronsson, an expert on NATO at the Royal United Services Institute in London, said she did not think any cuts would have major implications for the alliance.

Nonetheless, details will remain murky until the actual budget is released next month. &ldquo;That&rsquo;s when you&rsquo;ll really get a sense of the choices that were made,&rdquo; Aronsson said.

However, despite talk of drawdown in Europe, some defense analysts say it is unlikely there will be massive cuts to a force structure of roughly 80,000 troops, 42,000 of them Army.

&ldquo;I don&rsquo;t believe they will scale back too much in Europe, doesn&rsquo;t make budgetary or strategic sense to do so,&rdquo; said Michael O&rsquo;Hanlon, a defense analyst at Washington-based Brookings Institution.

For some time, many military observers in the U.S. have lamented Europe&rsquo;s lack of investment in its own defense while questioning whether the security offered by the current U.S. force has given Europeans a free ride for too long. To that end, a bipartisan group of senators in October called for a full review of the costs associated with running U.S. military bases overseas, singling out facilities in Europe as obsolete Cold War relics.

&ldquo;Europe is so very 20th Century,&rdquo; Exum wrote. &ldquo;The United States has a deep appreciation for its European allies, but those same allies are going to have to figure out how to fund and support their own defense. Because in terms of U.S. priorities, Europe ranks lower than ever.&rdquo;

In the wake of U.S. downsizing in Europe, Hammond, the British defense secretary, said Europe needs to do more to bolster the transatlantic alliance.

&ldquo;Too many countries are failing to meet their financial responsibilities to NATO, and so failing to maintain appropriate and proportionate capabilities,&rdquo; Hammond said Thursday during an appearance at the Atlantic Council in Washington. &ldquo;Too many are opting out of operations or contributing but a fraction of what they should be capable of. This is a European problem, not an American one.&rdquo;

When asked about the prospect of fewer American infantrymen in Europe, Hammond said allies are likely to understand the strategic rationale and budgetary pressures prompting such a move. However, that understanding is tinged with disappointment.

&ldquo;Of course, reductions in U.S. troop numbers are not going to be welcomed by European allies in the alliance,&rdquo; Hammond said. &ldquo;I think Europe needs to respond in a mature way, not a histrionic way.&rdquo;