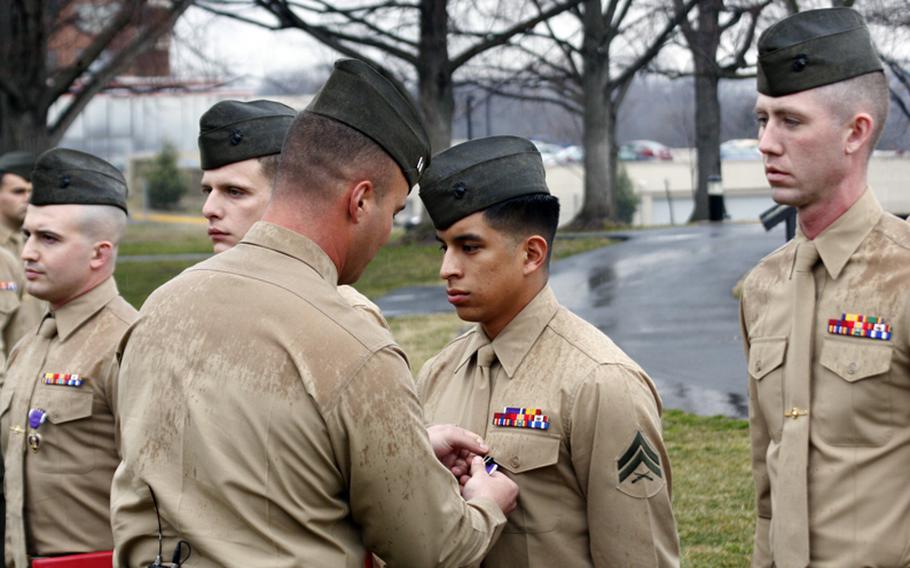 Capt. Paul Tremblay, commander of Company B, 1st Battalion, 6th Marine Regiment pins a Purple Heart on the shirt of Cpl. Efren Garcia during a ceremony Thursday at the Marine Corps Memorial in Arlington, Va. (Carlos Bongioanni/Stars and Stripes)

This story has been updated and corrected.

ARLINGTON, Va. - It wasn't easy to talk about. Four Marines awarded Purple Hearts Thursday in front of the national Marine Corps Memorial found it difficult to open up about their recent deployment to Afghanistan.

"We had a job to do. We went over there and did our job, and now we're home," said Sgt. Curt Bartz, who was awarded two purple hearts at the ceremony. "Everybody is proud of us. We know that we did a good job. That's all we can do."

The four Marines, wounded at different times during their deployment, said they still don't know for sure what hit them. They could have been hit with improvised explosive devices or rocket-propelled grenades, they said.

Lance Cpl. Robert Henry was the only one of the four willing to talk about his injuries. "Mainly a concussion," he said. "I got medevaced for it. Have some lingering symptoms. It's a lot better, but some things ain't the same. My left eye is a little blurry."

None of the Purple Heart recipients -- including Bartz, Henry, Cpl. Efren Garcia and Lance Cpl. Andrew Walker -- wanted to talk about the Marines their company lost.

"We had two Marines not come back that came with us," said Capt. Paul Tremblay, commander of Company B, 1st Battalion, 6th Marine Regiment. Cpl. Phillip D. McGeath died Jan. 18, less than two weeks before the Camp Lejeune, N.C., Marines were to begin their rotation back to the states. "They're mourning him right now," Tremblay said explaining the Marines' reluctance to talk about those wounded and killed during the deployment.

The other Marine was Pfc.Terry Wright who died in the line of duty, but his death was not combat-related, Tremblay said.

As a drizzle steadily fell from the gray overcast sky, Tremblay said in planning the ceremony at the memorial, he wanted his Marines "to remember, no matter how hard the times get, or how bad their dreams are, that they are part of a larger prestigious organization that takes care of its own."

As part of taking care of his company, Tremblay arranged for his Marines, roughly 170 of them, to travel from Camp Lejeune to visit fellow Marines from their unit whose injuries required them to be medically evacuated from Afghanistan and who are recuperating at the Walter Reed National Military Medical Center in Bethesda, Md.

Tremblay said 16 of his Marines were medevaced out during their seven-month deployment. Visiting them at the Bethesda complex was an "incredibly powerful, healing measure for us," he said. "We've been able to come together as a family and as a company. It removes the stress of uncertainty for my Marines not knowing exactly what to say or when to reunite with their brethren who were wounded."

The Marine Corps University Foundation helped fund Company B's trip from Camp Lejeune to the Washington D.C. metro region and assisted with their lodging. Go to www.mcuf.org/programs_command.html for more information about their assistance to Marine units.

For the Company B Marines who arrived back in the states on Feb. 4, and for whom the trauma of war is still fresh in their minds, visiting their wounded comrades and presenting the Purple Hearts at the Marine Corps Memorial was a therapeutic venture.

"It's a pretty humbling experience overall," said Bartz. "Got to see our brothers that came back a little early, and a lot of guys will be able to sleep better tonight. It's been probably one of the most humbling experiences I've had in the Marine Corps.

"They're all doing good now."

Update: Marine Cpl. Christopher D. Bordoni who was severely injured in Afghanistan on Jan. 18, 2012, died of his wounds on April 3, 2012, minutes after receiving his purple heart, Tremblay said. Also, the story above now reflects that Pfc.Terry Wright died in the line of duty, but his death was not combat-related, Tremblay said.

Correction: In the original version of this story, it was erroneously reported that Lance Cpl. Christopher P.J. Levy, was a member of Co. B. Levy, who died Dec. 10 of wounds sustained Dec. 7 while conducting combat operations in Helmand province, was part of Weapons Company, 1st Bn, 6th Marines.