For veterans, Battle of the Bulge memories 'getting a little misty' 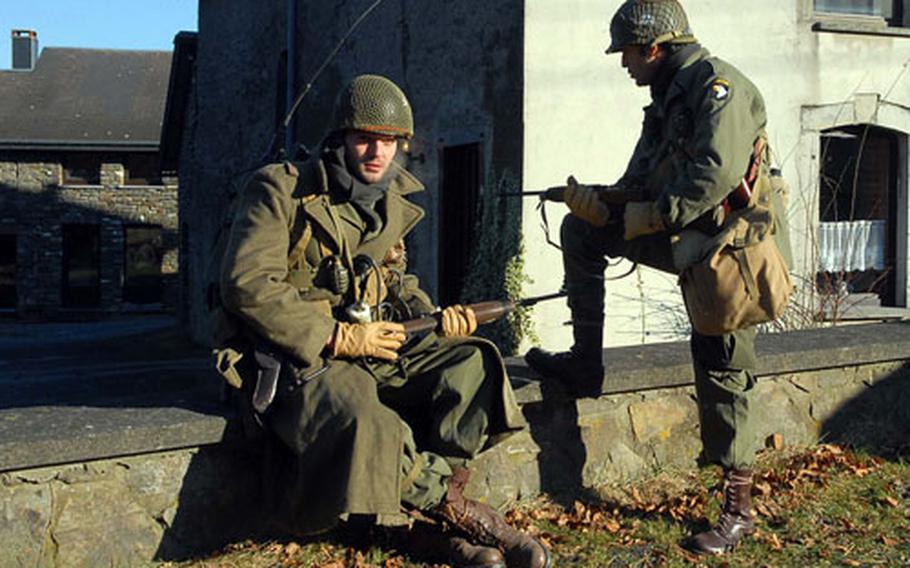 Like a scene out of a World War II movie, two re-enactors take a rest in Hemroulle, Belgium, during the 30th walk of the Bastogne perimeter commemorating the 63rd anniversary of the Battle of the Bulge. (Michael Abrams / S&S)

BASTOGNE, Belgium &#8212; He can close his eyes and recall it all, or at least as much as Frank Soboleski cares to these days.

At 83, in the twilight of his life, the World War II veteran prefers happy to haunting thoughts.

But standing in a field north of Bastogne, an area he hasn&#8217;t graced since 1944, Soboleski can lower the lids and still recall the foxhole he and Herb Suerth dug. Or the sight of a German tank cresting a hill. Or the call of a wounded man on a frigid night asking for a medic after a German artillery barrage.

Soboleski was one of several veterans who returned to Belgium this weekend to commemorate the 63rd anniversary of the largest land battle in Army history. They were joined by scores of U.S. servicemembers, hundreds of WWII re-enactors and thousands of regular citizens.

In his after-action report, Gen. Dwight D. Eisenhower, the supreme allied commander, cited the number of German casualties and the loss of enemy tanks, planes, transport trucks and even locomotives.

But, he wrote, &#8220;more serious, in the final analysis, was the widespread disillusionment within the German army and Germany itself, which must have accompanied the realization that the breakthrough had failed to seize any really important objective and had achieved nothing decisive.&#8221;

While the annual commemoration typically falls on a Saturday, with Sunday&#8217;s vehicle parade through Bastogne being the curtain call for WWII re-enactors, there is talk about extending it to three days next year. That&#8217;s because in recent years it has drawn more and more people.

Staff Sgt. David Copeland, a mechanic with the 123rd Main Support Battalion in Dexheim, Germany, drove up for the day. The two-tour Iraqi war veteran did not want to let another year slip by without paying his respects.

The experience of war, Copeland said, &#8220;gives you a different perspective on life and combat.&#8221;

Copeland spoke near to where Soboleski, Suerth and Ray Nagell, another WWII veteran, waited for a group of re-enactors from the United States to parachute out of a C-47 Dakota aircraft. The jump came toward the end of the 30th annual memorial walk, which each year retraces a section of the perimeter defense around Bastogne. The city became an enduring symbol of the battle because the U.S. Army managed to hold it despite being surrounded and attacked for five long days.

Besides the walk, there are several wreath-laying ceremonies, a couple of parades and a church service, among other activities. And, of course, there are all sorts of re-enactors, from Switzerland to Scandinavia, dressing the part and tooling around in vintage WWII vehicles.

&#8220;They look like they are having more fun than anything else,&#8221; said Army Sgt. Lindsay Bjelde, who is assigned to Mons, Belgium.

A few minutes earlier, the pair had watched a wreath-laying ceremony in the village of Champs. It was attended by the U.S. ambassador to Belgium, Sam Fox. Watters, 67, said he was talking with Fox&#8217;s wife when a German man in his 50s approached. The man had tears in eyes, Watters said.