For USS Kitty Hawk sailors, it’s all in the detailers 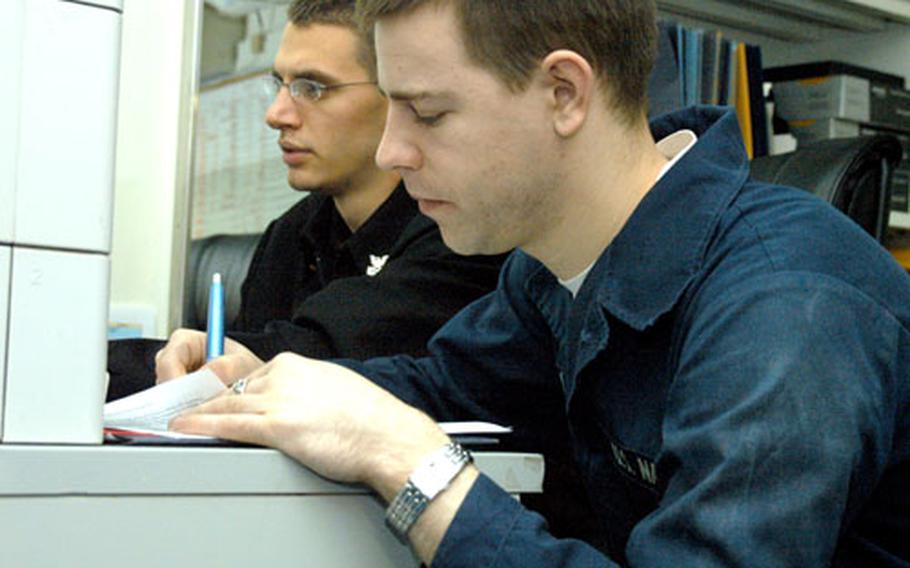 Navy seaman Robert Busch was one of more than 2,000 sailors who met with detailers aboard the USS Kitty Hawk last week to determine their next duty stations, or in the case of undesignated sailors, the schools that will determine their rates. Busch, 24, made out his dream sheet for detailer Petty Officer 1st Class Bryan Gill, rear, on Tuesday. (Allison Batdorff / S&S)

The responses were varied, as sailors found out where they&#8217;re headed &#8212; anywhere from the snows of Chicago to the sands of Iraq.

The Navy&#8217;s Bureau of Naval Personnel in Millington, Tenn., sent 24 detailers to Yokosuka for the express purpose of reassigning sailors affected by the carrier swap slated for this summer.

Less than a third of the ship&#8217;s crew, 940 sailors, will cross deck to the USS George Washington when it officially replaces the Kitty Hawk in Pearl Harbor, Hawaii.

The 46-year-old Kitty Hawk will head for decommissioning, and the nuclear-propelled George Washington will take its place in Yokosuka&#8217;s forward-deployed naval forces.

Another third are headed to shore billets in the United States, while the rest are going to sea-duty billets worldwide, including those going to Iraq and Afghanistan, Kitty Hawk spokesman Lt. Bill Clinton said.

A number of sailors volunteered for GSAs, he said.

Having families there was positive, he said, as &#8220;they get the face-to-face treatment that is so much better than a long-distance phone call.&#8221;

Preparing for the George Washington&#8217;s arrival and the Kitty Hawk&#8217;s decommissioning while staying ready for military action involves a balance, he said, adding that people will begin moving in phases starting in June and running through September.