For USAREUR, loud talk about preparedness is a force multiplier 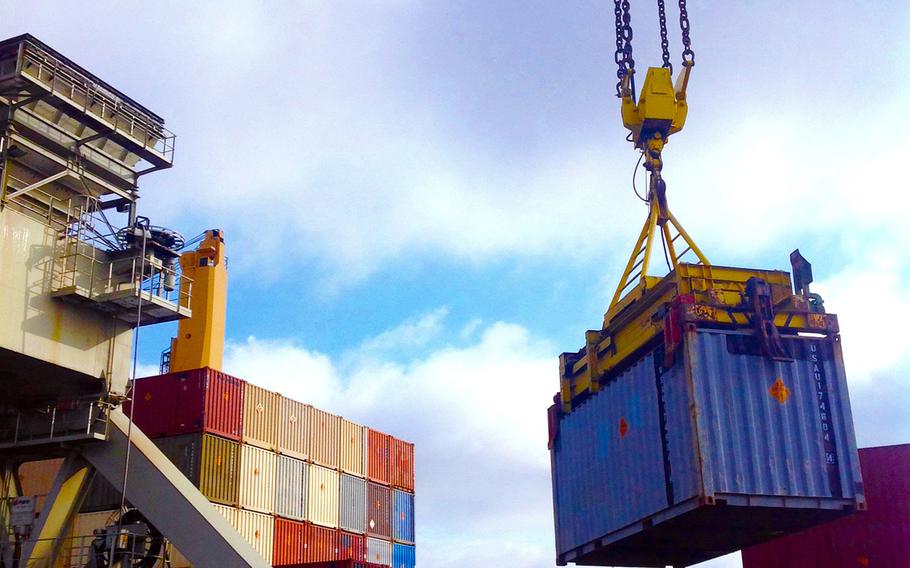 In late February, the Army released this photo of a crane offloading containers full of ammunition in Nordenham, Germany, the largest ammo shipment to Europe in 10 years. Although some questioned the operational security risks involved in such an announcement, U.S. Army Europe officials say such messages are part of the mission to assure allies and deter aggression. (Brad Culligan/U.S. Army)

In late February, the Army released this photo of a crane offloading containers full of ammunition in Nordenham, Germany, the largest ammo shipment to Europe in 10 years. Although some questioned the operational security risks involved in such an announcement, U.S. Army Europe officials say such messages are part of the mission to assure allies and deter aggression. (Brad Culligan/U.S. Army) Werner Staab, a heavy equipment operator with the Theater Logistics Support Center-Europe?s ammunition center, uses a forklift to offload part of a 5,000-ton ammunition shipment that was recently sent to Europe. The release of such information to the public, part of an Army news release, led some to question whether the service was practicing good operational security. (James Grell/U.S. Army) 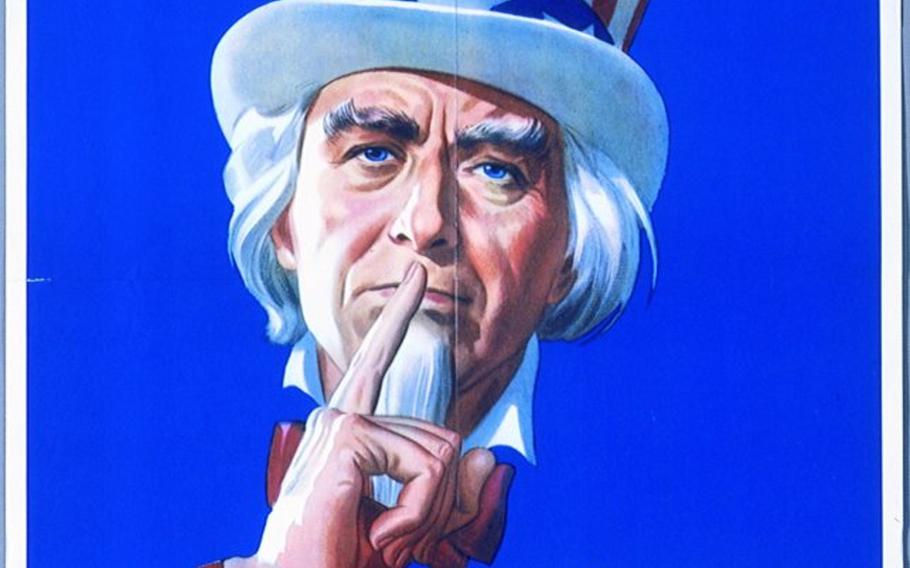 During World War II, images of Uncle Sam were used to promote national security, especially in plants that were producing war materials under government contracts. This poster was inspired by James Montgomery Flagg's 1917 "I Want You for the U.S. Army" poster. () 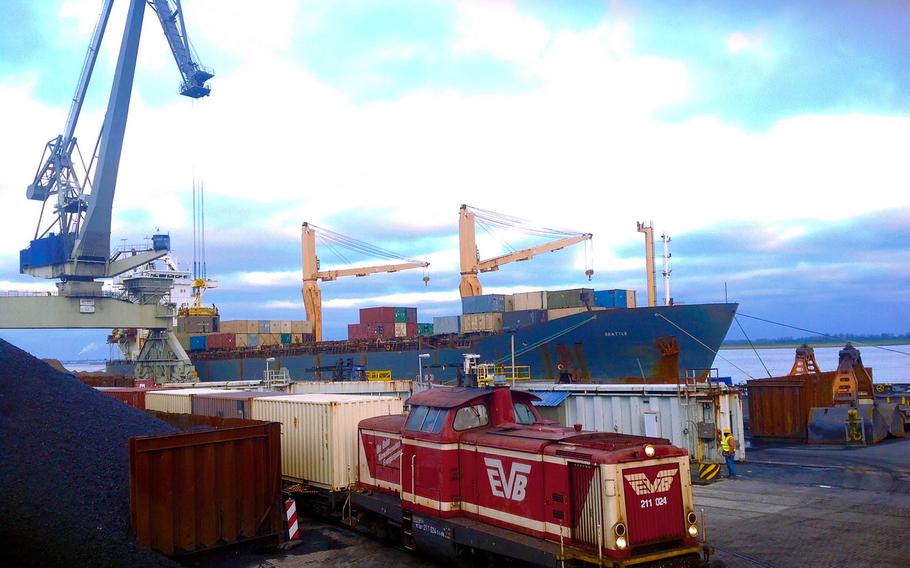 In late February, the Army released this photo of a train moving cargo containers full of U.S. ammunition to a railhead where it was transported to the Theater Logistics Support Center-Europe?s ammunition center in Miesau, Germany. The release of such information to the public led many to question whether the service was practicing good operational security. (Brad Culligan/U.S. Army)

When U.S. Army Europe recently completed its largest ammunition delivery to the Continent in a decade, the Russians took notice, broadcasting the news on Russia Today.

The Army’s ammo stockpile also caught the attention of the Iranians, whose Press TV shared the information. From east to west, news that 5,000 tons of ammunition were delivered to a specific U.S. Army Europe depot in Germany in late February was an attention-grabber in a region where old Cold War-style tensions now flare.

And it all started with an Army news release — complete with photos — that was circulated widely across social media and republished by organizations large and small. The move is part of a USAREUR strategy to loudly declare its readiness to friend and foe alike, even if that means challenging old notions about operational security.

“The safety and security of our soldiers is at the forefront of what we do, but we also have a mission to assure our allies and partners and deter further aggression,” said Col. Martha Brooks, USAREUR spokeswoman.

But to some in the military community, such publicity can seem at odds with the Army’s traditional fixation on operational security, amounting to a violation of OPSEC 101: Don’t tell the enemy what you’re doing.

“Wtf? Did you guys include the combo to the gate too! OPSEC,” railed one Stars and Stripes reader on Facebook.

A flurry of commentary followed: “Ammo dumps should be kept secret.”

“Way to go…. Tell everyone where the munitions are stored!!!.”

“Is nothing secret anymore? When we were stationed in Germany we were always warned about talking about anything related to our spouse’s job, unit, training or anything else.”

For USAREUR, the decision to trumpet things such as ammo deliveries, dramatic tank movements and even mundane planning conferences is a fundamental part of a new mission that seeks to send a stronger signal of Army readiness. That sometimes raises the prospect of talking up day-to-day missions in ways less common during the Cold War, when a massive military presence of 300,000 troops spoke for itself.

The key is striking the balance between protecting what must be secret and publicizing what allies and adversaries need to hear, USAREUR leaders say.

The 5,000 tons of ammo being sent to Germany is the largest single shipment to Europe in a decade. It is intended to be used for the Army’s coming Anokonda exercise in Poland, which will involve about 20,000 U.S. and European troops and will serve as signature USAREUR event in 2016.

“Highlighting certain missions — in this case a delivery of ammunition — sends a message that we’re able to coordinate with host nations and have the freedom of movement to conduct missions throughout the theater,” Brooks said.

The Army’s heightened focus on communication has become apparent over the course of the past 18 months. This has been demonstrated through a series of well-publicized efforts, such lengthy road marches through the Baltics, and it comes amid renewed security concerns in Europe. After two decades of steady U.S. military drawdown, Russia’s seizure of Ukraine’s Crimea Peninsula upended the near-universal view that a generation of calm and order in Europe was here to stay.

For the U.S., concerns over Russia’s more aggressive posture has sparked a surge of NATO activity across the Baltics and eastern Europe, with larger numbers of rotational forces circulating through the region. The Army has played a big role in that campaign, receiving the bulk of funds under the so-called European Reassurance Initiative that pays for the increased presence.

A new funding request calls for $3.4 billion to be spent on reassuring allies and deterring Russia. It would send a brigade’s worth of combat ready tanks to be used in a crisis.

As those efforts unfold, USAREUR said it would look for ways to amplify those missions, taking to social media to spread the Army’s word. A driving force behind the push is USAREUR’s Lt. Gen. Ben Hodges, whose mantra of “make 30,000 soldiers look like 300,000” has become something of a mission statement at the command’s headquarters in Wiesbaden.

“The key to any strategy is having senior leaders who are willing to proactively engage the press and establish a command climate that encourages U.S. Army Europe leaders at all levels to tell our story at every opportunity,” Brooks said.

Still, old ideas about OPSEC die hard, and USAREUR’s press to publicize sometimes strikes the wrong chord for some.

“My God, does OPSEC not exist anymore, what the hell is wrong with you people!!!,” wrote one Stars and Stripes reader.