For US forces, delivering peacekeepers to the Central African Republic is no easy task Rwandan soldiers form up after a C-17 Globemaster III based out of McChord Air Force Base, Wash., dropped them off in the Central African Republic on Jan. 19, 2014. (Ryan Crane/U.S. Air Force)

Rwandan soldiers form up after a C-17 Globemaster III based out of McChord Air Force Base, Wash., dropped them off in the Central African Republic on Jan. 19, 2014. (Ryan Crane/U.S. Air Force) 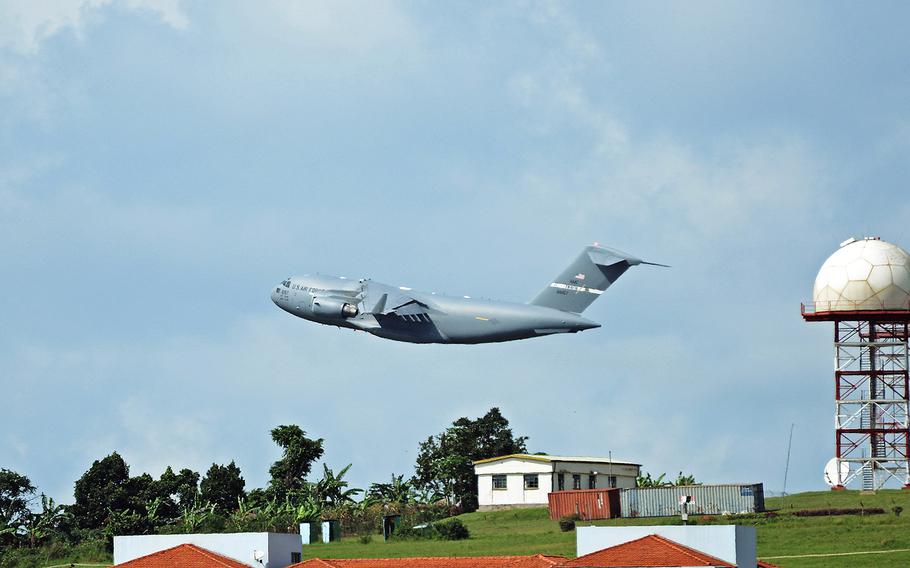 A C-17 Globemaster III out of Travis Air Force Base, Calif., takes off from Entebbe Airport in Uganda on Jan. 22, 2014. The Ugandans have supported multiple U.S. missions in the past few months by providing an airfield, transportation, and maintenance packages so the African Union can successfully carry out peace keeping operations. (Ryan Crane/U.S. Air Force) 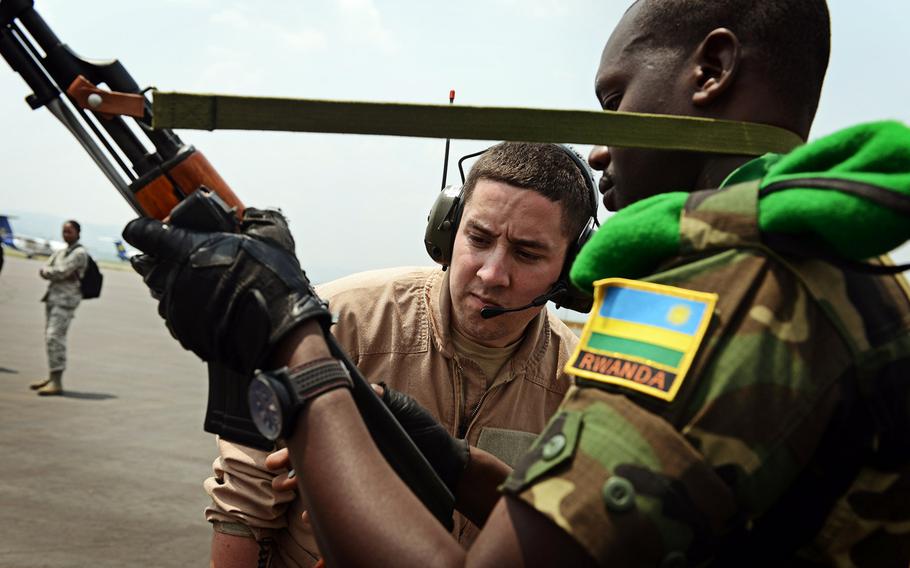 Air Force Senior Airman Chase Vento inspects the weapon of a Rwandan soldier prior to allowing him on a C-17 Globemaster III in Rwanda on Jan. 19, 2014. (Ryan Crane/U.S. Air Force) 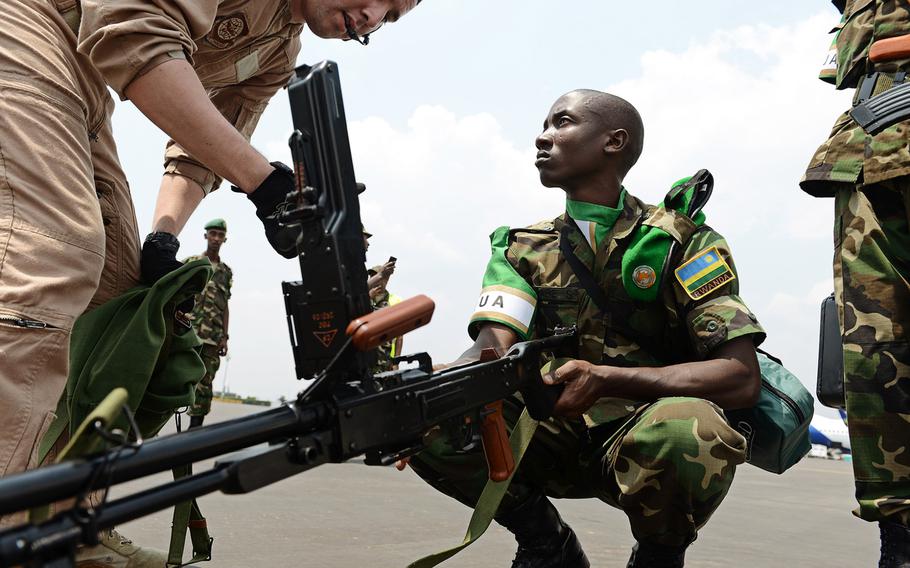 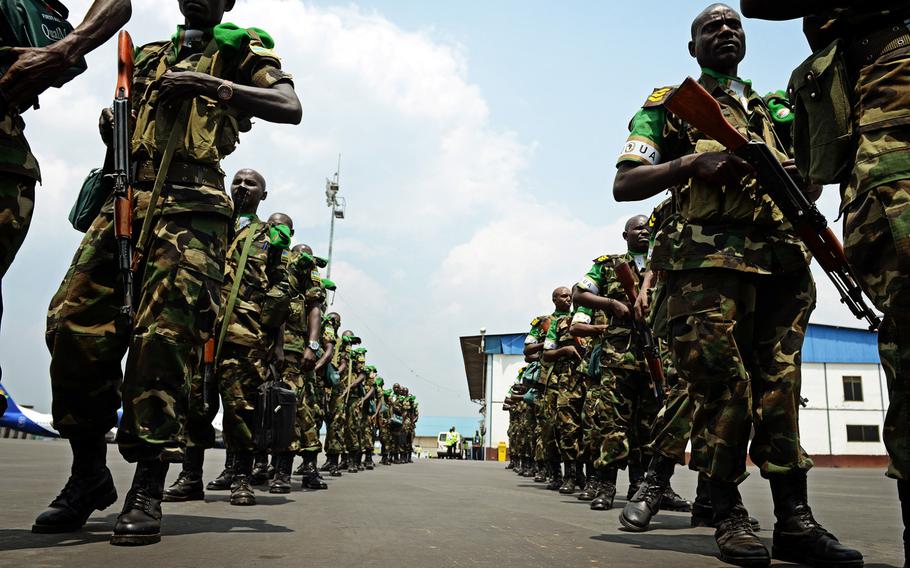 Rwandan soldiers wait in line at the Kigali airport on Jan. 19, 2014, to get on a C-17 Globemaster III, based out of McChord Air Force Base, Wash. (Ryan Crane/U.S. Air Force) 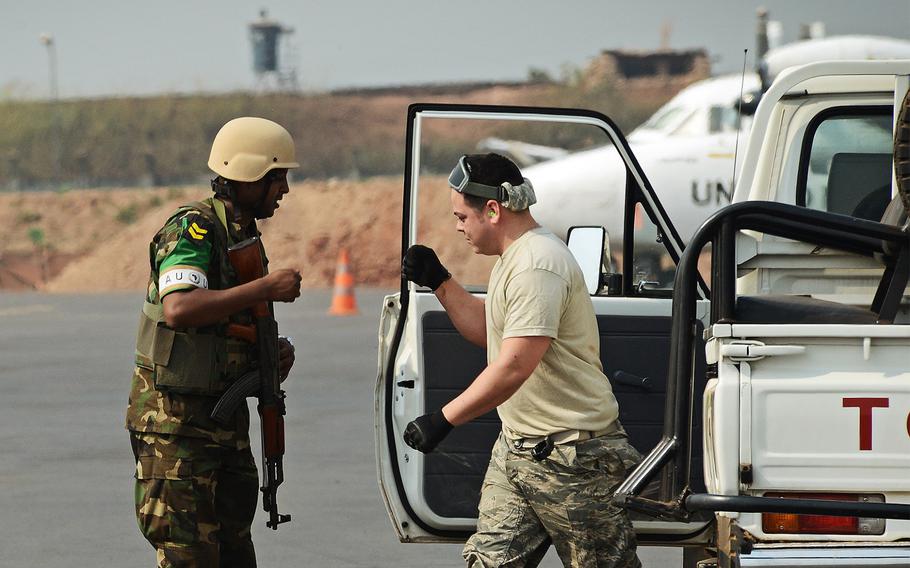 Rwandan soldiers and their equipment are flown on Jan. 19, 2014, from Rwanda to the Central Africa Republic on a C-17 Globemaster III based out of McChord Air Force Base, Wash. (Ryan Crane/U.S. Air Force) Capt. Elizabeth Shaw, 62nd Airlift Wing aircraft commander scans the runway for any people or animals before landing at the Bangui airport in the Central African Republic on Jan. 19, 2014. (Ryan Crane/U.S. Air Force)

WASHINGTON — Landing a C-17 cargo aircraft at the airfield in Bangui, the capital of the Central African Republic, is like landing at any airport — except for the fact that the airfield is surrounded by smoke, the radar system on the ground is weak, control tower operators are difficult to communicate with, the tarmac is short, and Internally Displaced Persons are milling about near the runway.

But putting wheels down in Bangui is only one part of a complex joint U.S. and international mission to bring peace to the CAR.

U.S. involvement started with a phone call from French Defense Minister Jean-Yves Le Drian. France has a long history of military intervention in the CAR dating back to colonial times, and when faced with escalating sectarian violence between Muslims and Christians in its former colony, Paris decided that MISCA — an African peacekeeping force in the CAR — needed to be beefed up significantly. But to get additional African forces in place quickly before the fighting spiraled out of control, France needed a little help from its friends; more specifically, the logistical capabilities of the U.S. Air Force. So last month, Le Drian called U.S. Secretary of Defense Chuck Hagel, who responded by ordering U.S. Africa Command to design and execute an airlift.

“Minister Le Drian requested … airlift support to enable African forces to deploy promptly to prevent the further spread of sectarian violence in the Central African Republic,” Pentagon Assistant Press Secretary Carl Woog announced Dec. 9. “The United States is joining the international community in this effort because of our belief that immediate action is required to avert a humanitarian and human rights catastrophe in the Central African Republic, and because of our interest in peace and security in the region.”

The Air Force airlifted 850 Burundian troops, along with their vehicles and other equipment, from Burundi to the CAR in December. It turned out to be just the first round of airlifts.

Now the U.S. military is conducting a similar mission with Rwandan soldiers. Stars and Stripes was able to talk to several American servicemembers involved in the new operation, which began Jan. 16.

The C-17 crew members conducting the airlift are working 14-hour days, according to Capt. Elizabeth Shaw, an aircraft commander and C-17 pilot. The 12-member crews start their day in Entebbe, Uganda, where Air Mobility Command’s Contingency Response Element for this mission is based. The crews head to Kigali, Rwanda, where they load Rwandan peacekeepers and their equipment. The C-17s then fly to Bangui where the Rwandans and their cargo are off-loaded. The crews then fly back to Entebbe to rest before their next sortie. Daily, two C-17s make the 1,900-mile trip from Uganda to the CAR and back. Four crews are taking part in the mission, and each crew works every other day on a staggered schedule.

There are approximately 85 U.S. servicemembers working in Entebbe, including the air crews and the personnel on the ground performing command-and-control and support functions.

“The biggest challenge for the CRE is basically the initial set-up because we need to be operational within, you know, a matter of hours … to start running the mission and getting the planes ready to go,” CRE Commander Maj. Micah Vander Veen said in a phone interview from Entebbe.

Shaw said there are many difficulties.

“It is definitely different from anything we’ve ever experienced, that’s for sure. I mean no one can really be totally prepared (for this),” she told Stars and Stripes in a phone interview from Entebbe. “There’s not any good radar … Sometimes we lose even radio frequencies, so we lose comm(unication) … It’s just very short resources I guess you could say out here.”

Even when communication systems are functioning properly, speaking with control tower operators throughout the region is difficult for the crew.

“There’s definitely a language barrier,” Shaw said. “They do speak some English. However, it’s not necessarily as good as we expect it to be, so we kind of have to interpret what they say.”

The number of IDPs from the conflict now living at the airfield in Bangui complicates landing.

“There’s thousands and thousands of people there,” Shaw said. “Sometimes [the people in the control tower will] have you do maybe a little approach around the field just to clear it and show the people, like, hey, there’s a large plane about to land. And then on the landing itself you can see hundreds of people all along the runway all excited, you know, cheering and basically waving at you. And then once you land and … [you’re] on the ground, then hundreds of people just start walking in front of the airplane as you’re taxiing.”

Short runways are a challenge, and so is the smoke from the open fires that people in Bangui use for cooking and trash burning.

“We can’t really see the field until we’re just a couple miles out. There’s this huge haze layer. And even on departure … you can definitely see this fog, this haze start to engulf the airfield,” Shaw said.

During the airlift of Burundian troops a few weeks ago, one of the C-17s wasn’t able to land because the smoke was so thick, Lt. Col. Allen Pepper, the officer in charge of the U.S. Army-Africa element in Bangui, told Stars and Stripes in a phone interview from the CAR.

Things aren’t easy for the six U.S. soldiers deployed to Bangui either.

Pepper, who lives with five other U.S. soldiers at a military camp adjacent to M’Poko, has to liaise with the French and MISCA forces in Bangui, the CRE, and USARAF headquarters in Italy. Most of the MISCA forces speak French, and Pepper speaks the language well.

He said many elements of the MISCA force have peacekeeping experience in Somalia, Darfur, and the CAR itself, so they’re not new to this kind of mission.

According to Pepper, all the troops on the ground in Bangui get along well — they trade uniform patches and eat at each other’s dining facilities — but poor communications infrastructure in the CAR complicates their jobs.

“With cell phones here being one of the primary means of communication for the personnel on the ground here … the infrastructure is sometimes lacking,” Chief Warrant Officer Erik Kruger, an Army communications specialist, said in a phone interview from Bangui.

Temperatures in Bangui sometimes reach into the triple digits, with high humidity this time of year.

“You’re very close to the equator, so [the heat from the sun] really seems to have an extra force to it,” Pepper said. Pepper said the Rwandans are highly motivated and feel a personal connection to their mission, given their country’s history of domestic turmoil and genocide in the 1990s.

“You can tell the minute they get off the plane they’re here to work and they’re ready to get to their mission as quickly as they can,” Pepper said. “I was talking with a Rwandan today, and he mentioned that it was just 20 years ago that they experienced some horrific things in their country, and so when they’re in a position to support peace, they’re ready to do that.”

Despite the challenges, the airlift is on track. But how long the larger effort will last and what the future U.S. role in the CAR will be is unknown at this point.

“It’s somewhat of an open-ended mission,” Pepper said. “The actual airlift of the Rwandans, though, will take another probably a couple of weeks, and after that we are going to continue to work with the French and with the MISCA forces. We’re continuing to figure out what their requirements for support might be, requests for support, and seeing how the U.S. military might be able to provide appropriate support, whether it be future airlifts … or perhaps advisers.