For U.S. troops leaving Iraq, the devil is often in the details 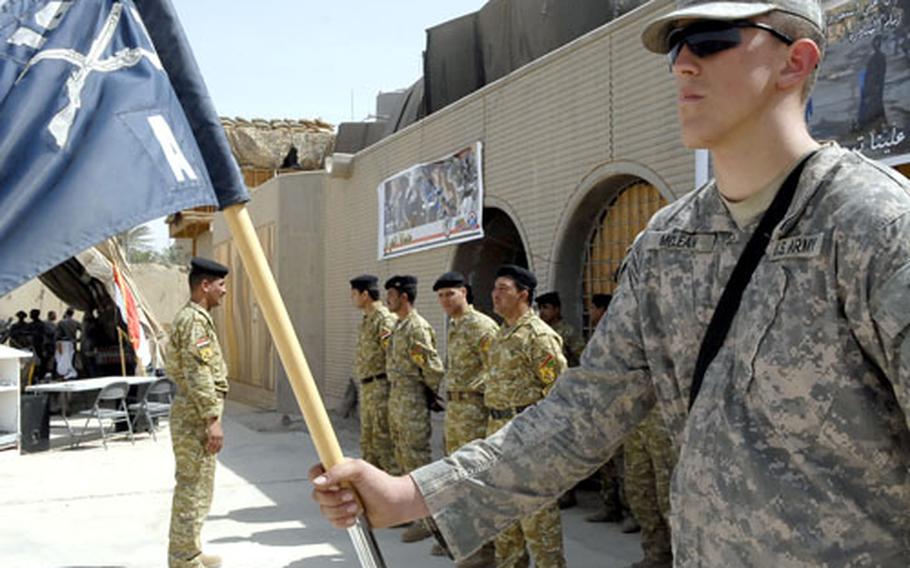 A U.S. soldier stands at attention while his Iraqi counterparts wait for the official handover of Joint Security Station Hurriyah 1 in northwest Baghdad. (Heath Druzin / S&S)

A U.S. soldier stands at attention while his Iraqi counterparts wait for the official handover of Joint Security Station Hurriyah 1 in northwest Baghdad. (Heath Druzin / S&S) 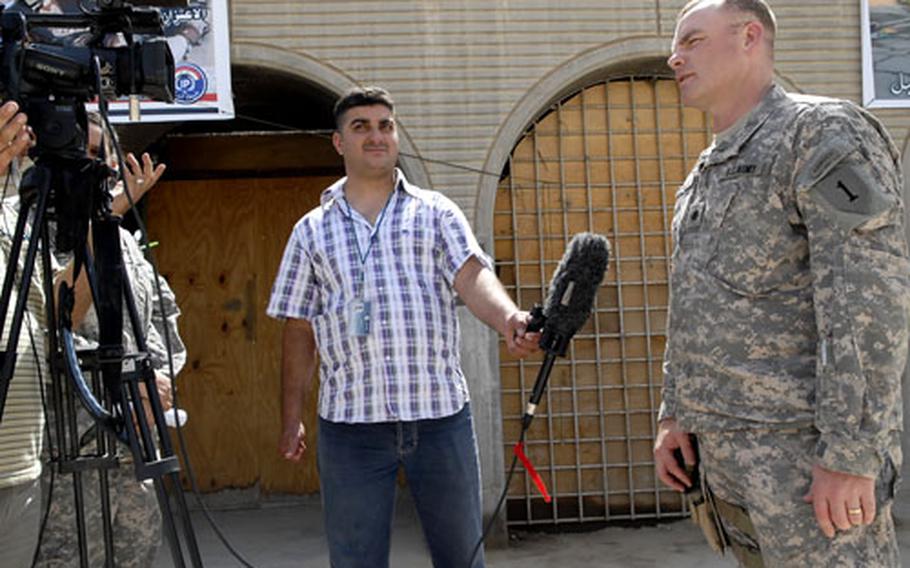 Lt. Col. John Vermeesch is interviewed by an al-Jazeera news crew at a handover ceremony to mark the start of Iraqi control at Joint Security Station Hurriyah 1 in northwest Baghdad. (Heath Druzin / S&S)

Minutes before the start of a recent ceremony to mark the handover of a small U.S. Army outpost to the Iraqi military in the Hurriyah neighborhood of northwest Baghdad, an emissary from Prime Minister Nouri al-Maliki&#8217;s office swept in, dressed in a smart suit and surrounded by a security detail.

The ceremony would have to wait, as there was crucialbusiness to attend to: The wrong person was slated to get the ceremonial golden key to the base and there was the all-important question of which generators the U.S. would leave behind, a significant detail in oil-rich but power-starved Iraq.

By 8:45 a.m., the daily broil had already begun and Lt. Col. John Vermeesch was eager to get under way before the summer heat soured the outdoor ceremony for the local dignitaries patiently waiting under a shade tent.

Through an interpreter, the Iraqi official explained that all bases are now to be handed over to a newly created government commission and that he, not the local Iraqi major, must be handed the symbolic key. And, with Joint Security Station Hurriyah 1&#8217;s concrete, bunkerlike main building already cleaned out in anticipation of the handover, the official said all generators producing 400 or fewer watts were to remain.

Vermeesch&#8217;s instructions were to leave only 200-watt generators. No one from the government had informed Vermeesch, or, it seems, his Iraqi army counterpart ahead of time of the changes.

In the end, the government emissary did receive the ceremonial golden key. But the generator question was left unresolved.

With less than a month to go before the June 30 deadline for U.S. troops to withdraw from Iraqi cities, the details of what the handover means are still foggy. In Baghdad alone, there were 50 joint security stations and combat outposts &#8212; small patrol bases in the middle of neighborhoods &#8212; and military officials say that number will dwindle to the teens by the end of the month.

For Vermeesch, who oversees operations in Baghdad&#8217;s Khadamiyah district, this means a different approach. He will go from four joint security stations to none and many of his soldiers will be relocated to the Victory Base Complex, the sprawling U.S. military compound on the southwestern edge of town.

Beyond that, though, Vermeesch said he&#8217;s still waiting to hear specifics on day-to-day operations. For example, with U.S. troops barred from unilateral patrols, can they even drive across town from the Victory Base Complex to link up with their Iraqi counterparts, or will Iraqi army units need to come pick them up?

The change will put more pressure on members of the Iraqi security forces, who will have to take over more of the daily security in Baghdad as U.S. forces withdraw to the edges of the city. After June 30, U.S. military officials say their troops will work on more of an on-call basis, helping when they are asked.

Maj. Hussein Atlab, who commands Iraqi forces at the security station, said the Iraqi army is ready to take on more responsibility &#8212; and that will be an important symbol for the Iraqi people.