For troops and the military system trying to help them, traumatic brain injury is new territory 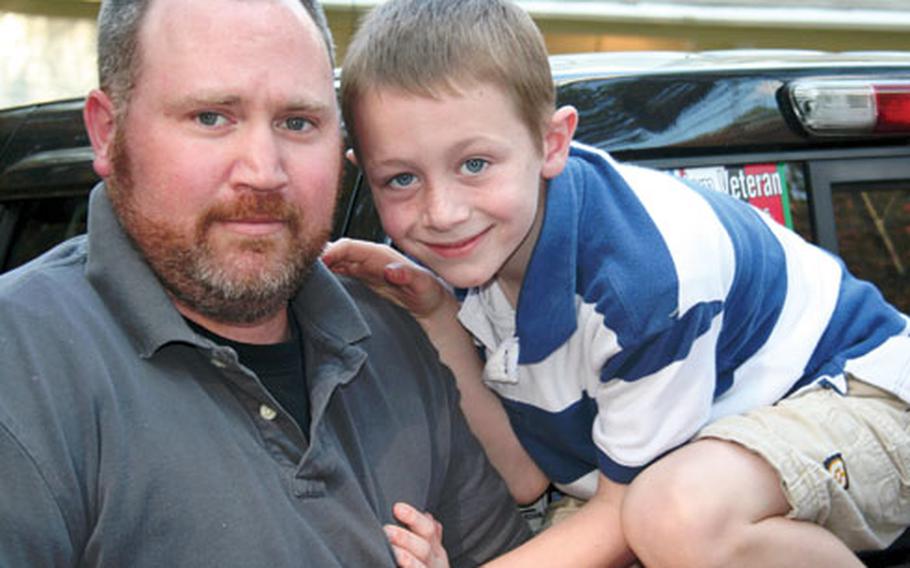 Former National Guard 1st Lt. Mike McMichael walked away from a roadside bomb in November 2004. It took three years for him to be diagnosed with traumatic brain injury. (Courtesy of Jackie McMichael) 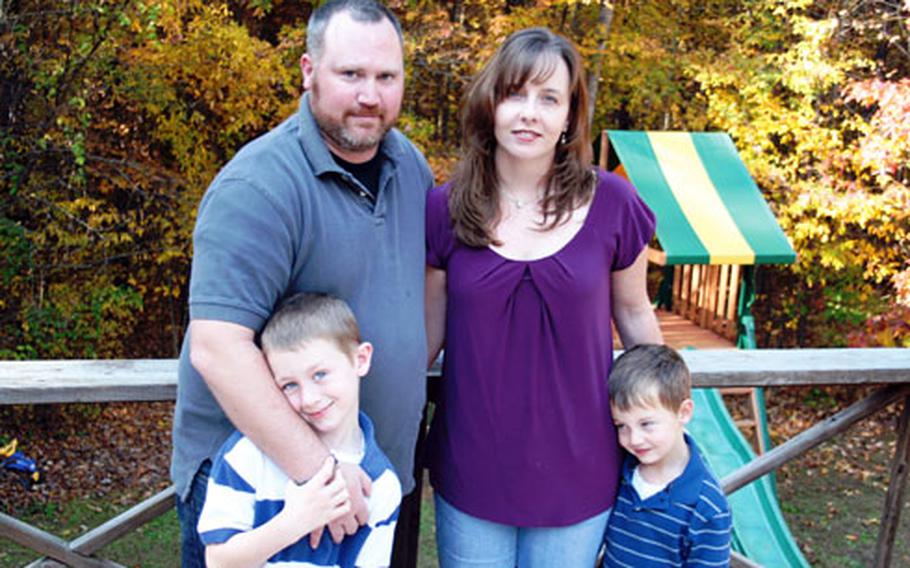 Iraq war veteran Mike McMichael — with his wife, Jackie, and sons Hunter, 7, and Alex, 5 — has struggled since surviving a roadside bomb blast in Iraq in November 2004. The McMichaels have dealt with his traumatic brain injury symptoms and a health care system that at the time had little experience with such injuries. (Photo by Jeff Schogol/S&S)

FRANKLINTON, N.C. &#8212; The first thing that 1st Lt. Mike McMichael felt when he regained consciousness was a stinging sensation.

It was the hot coffee he had been carrying in a thermos, which split when the roadside bomb went off on his side, flipping his vehicle.

Even though he had been unconscious for a couple of minutes, Mike appeared to have escaped the blast uninjured.

By the time he was diagnosed with traumatic brain injury nearly three years later, he had lost his job, faced financial ruin and nearly wrecked his marriage. His story shows all the pain that can result when TBI is not detected early.

As the Iraq war has progressed, experts have learned more about TBI and implemented measures to combat it.

In 2006, the Defense Department began efforts to screen wounded troops for TBI, said Kathy Helmick, of the Defense and Veterans Brain Injury Center.

Now troops are screened in theater, in Germany, back home and by the Department of Veterans Affairs, Helmick said.

But this all occurred after Mike was injured in November 2004, toward the end of his deployment to Iraq with the North Carolina National Guard.

Everyone in the vehicle walked away from the blast. Although he started suffering migraines, Mike pushed on, anxious to get his unit home.

Mike came back from Iraq diagnosed with post-traumatic stress disorder, but instead of getting treatment, he was given a long list of phone numbers to call, he and his wife told Stars and Stripes.

"At the time, as far as theater went, they didn&#8217;t know anything about traumatic brain injuries. &#8230; So if you were able to walk away from something, you just walked away and that was it," Mike said.

At first, Jackie thought the hard part was over: Her husband was home, he looked great and he had all his limbs.

But within a few weeks, it was clear something was wrong.

Mike was suffering from nightmares and crippling headaches.

Later, when his company sent him to Texas, Mike felt panicked that he would not have enough supplies for the trip and spent about $1,100 in four days, Jackie said.

In December 2005, Mike had a hallucination that King Kong was in his home. Mike started smashing things, punching between 40 and 50 holes in the walls and asking for a weapon, she said.

Afterwards, Mike went to a civilian psychiatric hospital, but his doctors ignored Jackie&#8217;s repeated attempts to tell them that Mike&#8217;s problem was much worse than he was telling them, she said.

"It just got increasingly frustrating because he was not talking to them; he wasn&#8217;t really telling them the full story about what was happening at home, and they weren&#8217;t talking to me about warning signs," Jackie said.

Mike&#8217;s doctors also did not talk to Jackie about the possible side effects of the medications they prescribed for him &#8212; and they constantly changed what he was taking, so the McMichaels were paying $200 each week in co-pays, she said.

"This time is mostly a blur to me because they had me almost to the point of walking around drooling," Mike said.

Far too often, doctors treat each individual symptom with a different medication instead of focusing on the traumatic stress itself, said Lerner, president of the Institute for Traumatic Stress in Long Island, N.Y.

"We really just need to increase awareness about traumatic stress and what we could potentially do to prevent post-traumatic stress disorder in the first place," he said.

Before Mike began treatment for TBI, he spun out of control when he lost his job in spring 2007.

Soon after, he abruptly left Jackie after an argument with her, and cashed out his 401(k) to start a business that ultimately ended in bankruptcy.

As Mike ran up debt, Jackie waited for their disability claim to work its way through the VA, which repeatedly lost Mike&#8217;s records, forcing her to resubmit paperwork, she said.

In one incident, Jackie was talking to a woman with the VA, who noted that Mike had been released from the hospital.

That is an atypical response from a VA employee, said Thomas Pamperin, deputy director of the compensation and pension service at the VA.

"It&#8217;s unfortunate if papers had to have been submitted more than once," Pamperin said. "We have recently made some stringent controls to make sure that all documentation that is pertinent to a claim is secured properly, and we do apologize if someone did have to submit paperwork more than once."

He also said that TBI evaluations can take longer if a patient is suffering from other mental disorders.

"It may have been that the clinicians were in the process of ruling out other disabilities," he said.

For the McMichaels, it took the help of Congress to resolve their financial problems, when Jackie testified before the Senate Veterans Affairs Committee in March about all that she and her family had been through.

Within 72 hours, all of the disability pay the VA owed her husband was in their bank account, she said. More compensation came later.

It was the end of a long battle, but for Mike, it was upsetting to see his case resolved so quickly when so many other veterans were struggling to get their disability benefits.

"It made me nauseated," Mike said.

Initially, Mike did not want to seek help with the Department of Veterans Affairs because he felt guilty about asking for help when so many other veterans seemed worse off, Jackie said.

But when Mike&#8217;s doctors suggested he undergo electroshock therapy, Jackie had enough and finally forced Mike to go to the VA in spring 2006.

Mike began to stabilize when his psychiatrist began treating him for TBI and he attended a six-week program in Salem, Va., for his PTSD.

"Part of it is literally reliving that trauma, but then answering all those internal questions you have about it and kind of addressing all those fears and everything, and when you come through it on the other side, you&#8217;ve kind of released that trauma and got it off your back, because you&#8217;re carrying it inside," Mike said.

Defense health officials are now working with the VA and civilian health care providers to identify the signs of TBI for veterans yet to be diagnosed, said Dr. Michael Jaffee, an Air Force colonel and director of the Defense and Veterans Brain Injury Center.

And in summer 2009, officials plan to kick off an education program for the families of troops who have suffered brain injuries, Helmick said.

Helmick could not say how many veterans like Mike came home with an undetected case of TBI before recent measures were put in place.