For Tops in Blue performers, tough audition is the easy part 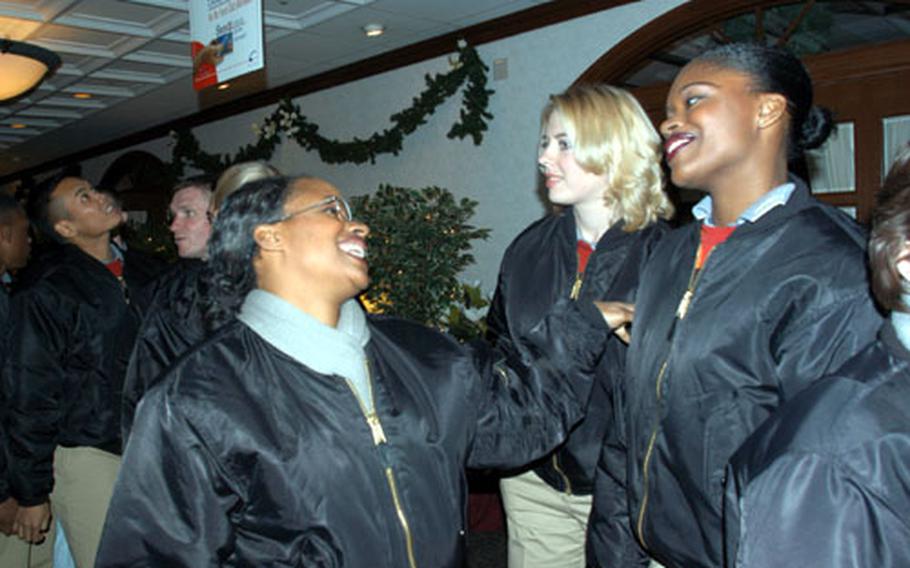 Staff Sgt Evelyn Bruce (left) and Senior Airman Tonie Dickerson share a laugh Saturday night at Yokota Air Base&#39;s Officers&#39; Club, after a social during which the Tops in Blue troupe met base officials. The group puts on more than 100 shows a year across the globe. (Jennifer Svan / S&S)

Staff Sgt Evelyn Bruce (left) and Senior Airman Tonie Dickerson share a laugh Saturday night at Yokota Air Base&#39;s Officers&#39; Club, after a social during which the Tops in Blue troupe met base officials. The group puts on more than 100 shows a year across the globe. (Jennifer Svan / S&S) Senior Airman Jamie Montgomery, a Tops in Blue vocalist stationed at Yokota Air Base, Japan, helps set up the stage Saturday afternoon at Yokota, where Tops in Blue performed Sunday. The Air Force&#39;s expeditionary entertainers are responsible for unloading 36,000 pounds of equipment and getting the stage ready for each show, in addition to performing. (Jennifer Svan / S&S)

YOKOTA AIR BASE, Japan &#8212; Senior Airman Jamie Montgomery hasn&#8217;t set foot inside his work site at the 730th Air Mobility Squadron since April, but he&#8217;s still on the duty schedule.

Montgomery, 22, is traveling the world and fulfilling a dream: singing on stage in front of thousands. When the curtain closes on his 11-month special-duty tour, he&#8217;ll return to his job at Yokota as a command post controller.

Montgomery is a Tops in Blue.

Montgomery and the 27 other Tops in Blue members made a swing through Yokota Saturday and Sunday for two performances. Their Saturday night show was postponed after the drummer, who had to attend to a family matter, was delayed flying into Tokyo Saturday. Two shows were held on Sunday.

As the Air Force&#8217;s expeditionary entertainers, the men and women of Tops in Blue say they may appear to have it made. Many are interested in the music industry; they say they gain invaluable stage experience with the troupe and get to travel the globe while earning a steady paycheck and keeping all the Air Force perks.

Eighteen-hour days aren&#8217;t uncommon. In their free time, the entertainers sleep. In one year, they put on 135 shows in more than 20 countries. Before each performance, they unload tons of staging, audio, lighting and special effects equipment from a tractor trailer and set up the stage. After the show, still in their stage makeup, they break down the set and reload the truck.

&#8220;We are the worker bees and the performers all wrapped up in one,&#8221; said Staff Sgt. Evelyn Bruce, 27, Tops in Blue vocalist and medical administrator from Incirlik Air Base, Turkey.

The Tops in Blue selection process is competitive. Active-duty airmen compete in base talent shows or submit a videotape and application to Tops in Blue headquarters in Texas. In a worldwide competition in February, Montgomery said, about 65 contestants are flown to Lackland Air Force Base, Texas, for 10 intense days of interviews and competitions.

Bruce, who is on her second tour with Tops in Blue, wanted to give something back to the troops after Sept. 11, 2001. As the noncommissioned officer in charge of patient administration for the 39th Medical Operations Squadron at Incirlik, she dealt with servicemembers injured or killed while fighting the U.S.-led war on terrorism.

Tops in Blue traveled to Afghanistan this year, but Bruce almost was left behind. Bruce was three months into a 15-month remote assignment when she auditioned.

&#8220;I knew my chances were slim because they were really short on NCOs,&#8221; she said, referring to her squadron at Incirlik.

But since Bruce was one of the few returning Tops in Blue performers this year, the Air Force Entertainment agency requested her release, she said.

Montgomery&#8217;s squadron commander championed his cause.

Tops in Blue performers stay assigned to their home-base units but on the road, they&#8217;re a self-contained operational unit. Each performer has additional responsibilities off the stage, from arranging ground transportation and lodging to distributing mail and loading equipment on pallets for transport.

Montgomery and Bruce said though they love performing, for now, at least, they plan to stay in the Air Force.