For these kids, acting up’s OK 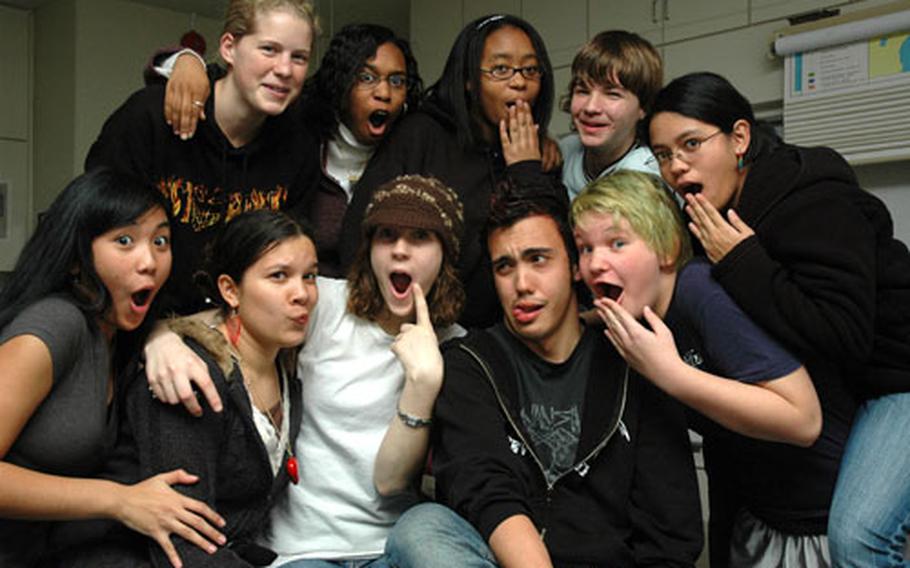 MARINE CORPS AIR STATION IWAKUNI, Japan &#8212; Ask the members of M.C. Perry High School&#8217;s drama club who in the room is shy, and hands and faces honestly fess up.

Of course, this confession comes after 30 minutes of chanting improv exercises, needling each other with inside jokes, and cracking up at their own antics. One guy &#8212; one of the self-proclaimed shy ones &#8212; barely needs an armtwist to get up and moonwalk.

What they mean is they used to be shy, back before they began getting up in front of each other and the Iwakuni community to act, dance, sing and offer their own scripts for everyone to see.

Shedding that shyness comes easier as confidence and acceptance grows, and the 11 members of Perry&#8217;s drama club say this acceptance among peers keeps them coming to Joseph Silbaugh&#8217;s classroom most afternoons to practice their dramatic techniques.

This year, the Perry group rolled into a Pacific-wide acting competition and placed second in the &#8220;readers theater&#8221; category, according to Silbaugh, the school&#8217;s language and speech teacher.

Drama Far East, an acting and improv competition among the Department of Defense Dependents Schools, judges students in their acting, speech and playwriting skills. Perry was the smallest group in the competition, Silbaugh said.

On their home turf in Iwakuni, the group last fall performed a shortened version of &#8220;One Flew Over the Cuckoo&#8217;s Nest,&#8221; a script Silbaugh reworked to provide more parts for the nine girls in the club. This spring, they are planning a production of &#8220;Annie.&#8221;

It can also create opportunities beyond high school.

Anna Hashman, a senior and four-year veteran of the club, plans to study drama next year at Western Washington University. She also writes plays, including the one she co-authored with Ryley that they entered in the recent competition.

All students in grades 9 to 12 are welcome to join the club, Hashman said, or participate in their productions. They usually meet Mondays through Thursdays after school from 4 p.m. to 6 p.m.